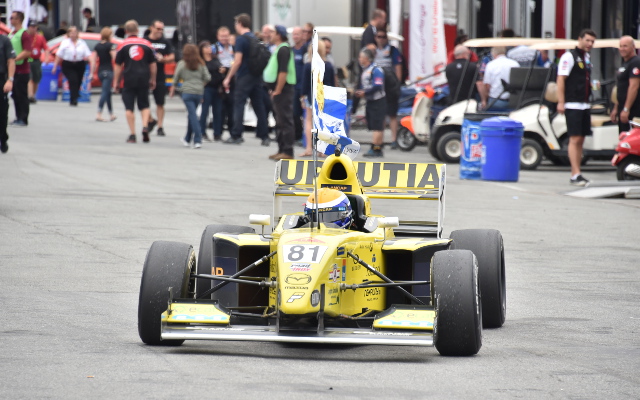 The Uruguayan crowned a fine first season in the United States with the Pro Mazda title, coming after a tough campaign in GP3 last year.

But more prominent on his mind was the historical significance of his achievement, for him and his country.

The day before Urrutia wrapped up the title with a second-place finish in the penultimate race of the season marked 16 years since Gonzalo Rodriguez lost his life in a Champ Car accident at Laguna Seca.

While his passing came just before I started to follow other areas of racing, it only takes a quick look at Rodriguez’s record – or to watch the new film about his life, Gonchi – to see how good he was and why he was such a hero to those in Uruguay, a country with little previous heritage in the sport.

That weekend at Laguna Seca was to be his second start in Champ Car, for none other than Roger Penske. At the time, he was second in the Formula 3000 standings behind Nick Heidfeld, and had finished third a year earlier, with only Heidfeld and Juan Pablo Montoya ahead. He’d taken convincing wins at the Nurburgring, Spa and Monaco.

From the amount of support he has from his homeland (emotionally, if not financially), it’s clear that Urrutia is seen as the closest Uruguay had to a successor to Rodriguez, in terms of his potential to represent the country at the highest level. He does benefit from the same state-owned oil company backing that Rodriguez had, too.

Urrutia paid his first visit to the Californian circuit last weekend with Rodriguez firmly in his mind, racing with a tribute helmet and determined to win the title in his honour. When he did just that, the emotion was clear to see, picking up a Uruguayan flag from a marshal for his drive back to the pits.

?It is special to win the championship at this track. I?m sure ‘Gonza’ was here today. He is a hero in Uruguay; he’s my hero, too,? he said.

?I am grateful for everything he did for the sport in Uruguay. We are only three million people and he worked hard to get to IndyCar. I am giving the helmet to his foundation in Uruguay and I hope to one day be the second driver from Uruguay to race in IndyCar.? 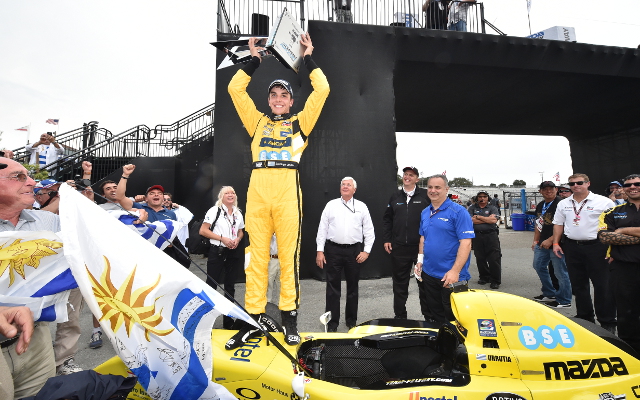 For Urrutia, his title represented unexpected glory in his first season in the USA, when he’s returned to winning ways after a very challenging GP3 campaign in 2014.

Urrutia’s reputation grew, both to his compatriots and to us at PaddockScout, with his performances in Formula Abarth in Italy in 2012.

With just a few races in the previous season under his belt, he won on three occasions to finish fourth in the standings behind the more experienced trio of champion Nicolas Costa, current GP3 leader Luca Ghiotto and Formula Renault 3.5 racer Bruno Bonifacio.

A switch to the Euroformula Open series followed for 2013, with Urrutia again finishing fourth in the standings with two wins.

After that promise, there were high hopes for his move into GP3, particularly as he had joined a strong team in Koiranen. The season was a nightmare though, with Urrutia failing to score a point, not finishing higher than 11th in 18 races.

Getting the budget together to do GP3 in the first place had been tough, so a season void of results wasn’t going to make doing a second campaign particularly easy. It was little surprise then, despite rumours of a switch to another GP3 team, that he headed to America.

Urrutia was a frontrunner from the off in Pro Mazda, with second in his first race and a win in his third. Two more victories followed and he was particularly consistent, only finishing outside of the top four on three occasions.

Thanks to Mazda’s Road to Indy scheme, Urrutia is poised for Indy Lights next season, and the possibility of emulating his hero Rodriguez by reaching the top level is well within reach.

Urrutia was not the only former driver from the European single-seater scene celebrating at Laguna Seca, as Frenchman Nico Jamin sealed the USF2000 title with his fifth and sixth straight wins.

Jamin headed Stateside last year after seasons in French F4 and Formula Renault 2.0, and after taking ninth in his rookie USF2000 campaign, he won 10 of the 16 races this year and was off the podium just once.

He joins compatriots Jean-Karl Vernay, Tristan Vautier and Florian Latorre as Road to Indy champions since 2010.

Oliver Rowland continues to build his points lead over Matthieu Vaxiviere, winning race one from pole position. He was on pole again for race two but finishes 10th in mixed conditions, though that was one place ahead of Vaxiviere, who was fourth in race one. Tio Ellinas leads Gustav Malja in a Strakka 1-2 on Sunday, with Nyck de Vries taking two podiums to go third in the standings. 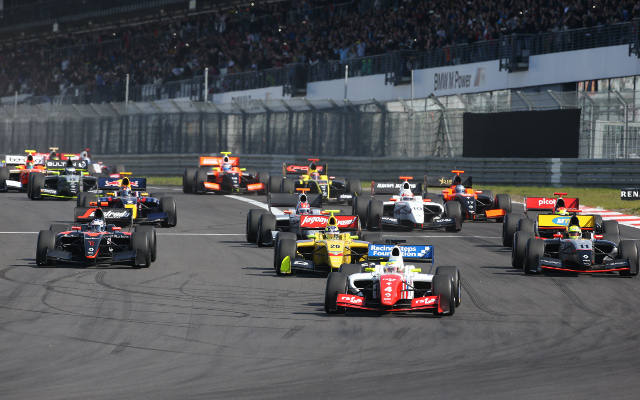 The title race closes up further, with the top four now split by just 12 points. While Louis Deletraz, Kevin Jorg and Jake Hughes have solid but unspectacular weekends with best finishes of fourth, fifth and fifth, Jack Aitken gets his third win of the year in race one. Ben Barnicoat recovers from Silverstone nightmare to win race two, meaning he’s only 45 points off the lead, with Anthoine Hubert within 29 after?a podium.

Joel Eriksson keeps the heat on Marvin Dienst by winning the two main races, but Dienst still takes a 30-point advantage to the final round by finishing second on both occasions, then fourth in race three. Joey Mawson wins the final race to keep his hopes alive, while there’s podium appearances for Robert Shwartzman, Mick Schumacher, Tim Zimmermann and Marek Bockmann.

Will Palmer secures the title with his ninth and 10th wins of the season, after finishing second in race one to team-mate Harrison Newey, who scores his maiden car racing win from pole position and ends the weekend by taking second in the standings from Tom Jackson, who struggles. 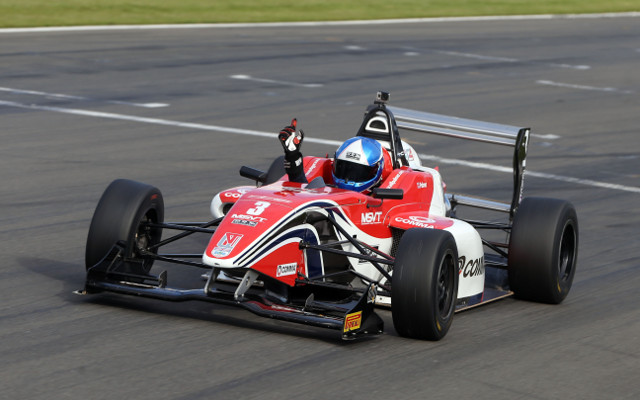 Spencer Pigot wins both races at the final round to snatch the title away from Jack Harvey, who can only manage fifth and ninth as his team lacks pace throughout. Kyle Kaiser and Ed Jones make the podium in race one, with Sean Rayhall and double polesitter Max Chilton there in race two.

Santiago Urrutia takes the title by finishing second in race one, a result he repeats in race two.?Garett Grist is the winner on both occasions. Urrutia’s rival Neil Alberico spins off two laps from the end of race one, ending his title hopes, but recovers with third in race two.

Nico Jamin ends the season with his fifth and sixth consecutive wins, taking the title in style. Anthony Martin finishes second in race one ahead of Jake Eidson and Aaron Telitz, with Telitz heading Eidson and Martin in race two. 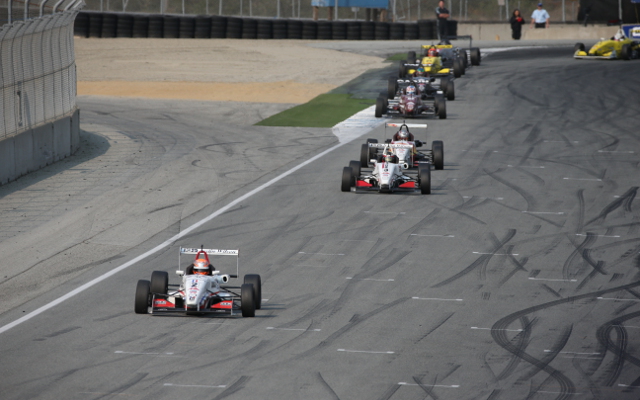 Jordan Lloyd records the first ever hat-trick in the series, boosting his points lead. Rival Tom Randle is second in the first two races but fourth in the third. Three other drivers make the podium; Jimmy Vernon (twice), Jordan Love and Luis Leeds.

Pedro Piquet continues his winning streak to wrap up the defence of his title. As usual, it involves coming from sixth on the reverse grid to win race two. Carlos Cunha and Christian Hahn finish on the race one podium, with Rodrigo Baptista and Nicolas Dapero there in race two.

Ex-Ginetta Junior racer?Pedro Cardoso continues to lead the standings after winning race one, but his advantage over Juan Manuel Casella is reduced by a race two non-finish after contact with Federico?Iribarne, who was second in race one. Rodrigo Pflucker follows up third to beat Casella to the win in race two.

Mathias Weinreich Smith secures the title in his third season with one round to spare. Second place in race one behind?Daniel Lundgaard was enough to do it, before Smith won race two. Lundgaard won again in race three.