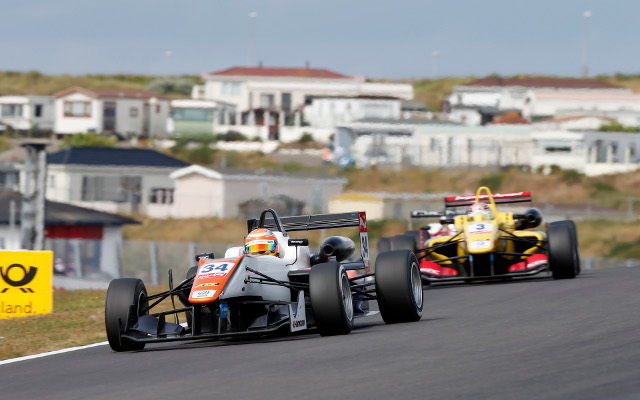 Antonio Giovinazzi, George Russell and Markus Pommer will start as the favourites for this weekend’s Masters of Formula 3 at Zandvoort, headlining a 20-car entry list that also features Dennis Olsen and Felix Serralles.

This year the prestigious event returns to being contested by latest-specification F3 machinery after a scheduling conflict prevented the cars from the FIA F3 European Championship taking part in 2014.

The size of the entry has increased from 11 last year to 20, although the Prema Powerteam, Mucke Motorsport and Signature teams will all be absent.

Prema’s decision not to take part means that championship leader Felix Rosenqvist will not chase a third win in the event after his successes in 2011 and 2013.

Another of this year’s title contenders missing will be Charles Leclerc, who will not join his two Van Amersfoort Racing team-mates?Alessio Lorandi and?Arjun Maini at the event.

That leaves Giovinazzi, Russell and Pommer as the drivers from the top 10 of the championship standings taking part.

Giovinazzi and Russell will be part of a four-strong Carlin line-up along with Red Bull junior Callum Ilott and Ryan Tveter – Gustavo Menezes and Tatiana Calderon will miss out.

Pommer, who along with Giovinazzi won in the European championship round at Zandvoort in July, will be part of Motopark’s regular five-car effort.

Nabil Jeffri finished third last year for the team, and joins Sam MacLeod in competing for a second consecutive year. The Briton was a first-lap casualty for VAR after joining Verstappen on the front row of the grid.

Last year’s Eurocup Formula Renault 2.0 runner-up Dennis Olsen is poised to make his F3 debut, driving alongside Moreno at T-Sport but in a car powered by a new Tomei engine, as opposed to the Neil Brown unit in the sister entry.

Euroformula Open’s Yarin Stern will step to top-level F3 with West-Tec, driving the car used by Fabian Schiller before the German parted with the team prior to the Portimao round earlier this month.

Double R Racing have entered two cars with drivers yet to be named, while Jo Zeller Racing is also on the entry list with one car for Felix Serralles.

The names of both team and driver haven’t appeared in top-line F3 since the end of last season, but Zeller has run two of the five cars fielded under the Mucke banner this year. Serralles, who raced in F3 between 2012 and 2014, last weekend ended his first season in Indy Lights with sixth in the final standings.

For the first time, a 12-lap qualifying race – similar to that seen at the Macau Grand Prix – will be held on Saturday, setting the grid for Sunday’s main, 25-lap event.