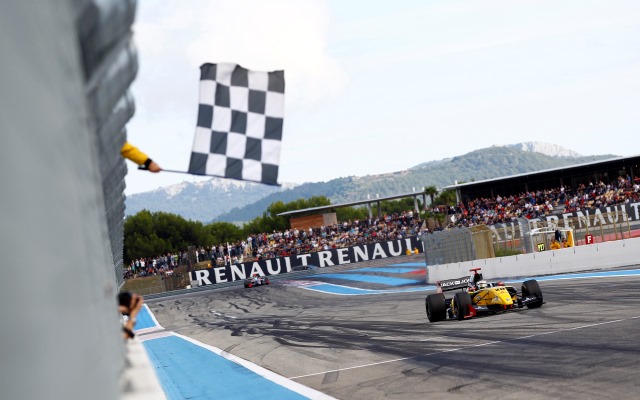 The great Dane proves his class in Formula Renault 3.5 at Paul Ricard, while at Zandvoort the European F3 title race closes up…

Magnussen dominates but technical infringement makes him wait for title

Kevin Magnussen is only eight points away from clinching the Formula Renault 3.5 after a dominant performance at Paul Ricard, although he could have it already wrapped up had he not been excluded from victory in race one. The Dane topped both Friday practice sessions and then won from pole on Saturday, which would have extended the gap over rival Stoffel Vandoorne to 46 points. However, his DAMS car failed the post-race technical inspection over a controversy around the DRS flag, resulting in him being excluded from the win and having his points advantage chopped to 18. Magnussen fought back perfectly on Sunday however, claiming another pole and another comfortable race win.

After taking second in the final race one results, Vandoorne then failed to finish on Sunday after struggling with his car throughout. As a result he is now 43 points behind his fellow McLaren junior with only 50 left to score at the season finale in Barcleona.

Antonio Felix da Costa inherited his second straight win after Magnussen’s exclusion on Saturday and then finished third on Sunday, cementing his third place in the standings and closing up to within 11 points of Vandoorne’s second place heading to the scene of his double victory last year.

Between Magnussen and Felix da Costa in second place in? race two was Nico Muller, who could have had a better weekend had he not stalled at the start of the first race before clawing his way back to tenth. He sits fifth in the standings, just one point behind Nigel Melker, who’s race one came to an early halt before he took fourth in race two with an early-pit strategy. Magnussen’s exclusion meant that Muller’s Draco team-mate Andre Negrao confirmed his recent form with a first podium of the year.

Report: Magnussen dominates race two to get one hand on title

Next round: Barcelona, 19-20 September 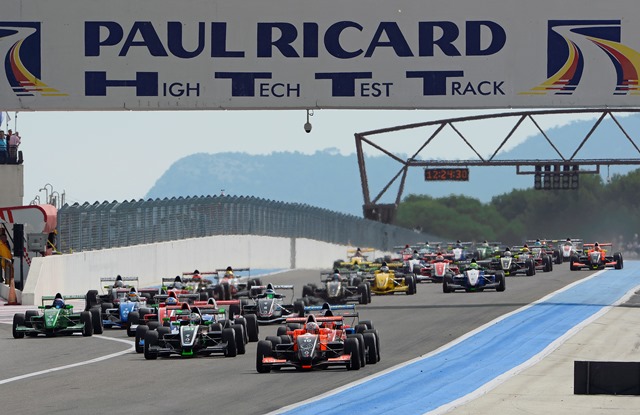 Gasly leads away the field at the start of race one (Photo: Renault Sport/DPPI)

Pierre Gasly takes an 11 point lead to the Eurocup Formula Renault 2.0 season finale, thanks to a victory in race one at Paul Ricard. He trailed Oliver Rowland by a point arriving at his home event, but with the Brit only managing a sixth on Saturday, he moved into a 16 point lead.

Things looked worse for Rowland when he qualified only 19th on Sunday morning while Gasly managed fourth, but in a wet-dry race the Racing Steps ace charged forward, stealing third at the line in a photo finish – two spots ahead of Gasly.

Esteban Ocon kept his slim title hopes alive by claiming a maiden win in that second race, ahead of Jake Dennis. Luca Ghiotto and Nyck de Vries completed the race one podium behind Gasly, but both dropped outside of the points on Sunday, even though Ghiotto started the race from a maiden pole position.

Next round: Barcelona, 19-20 September 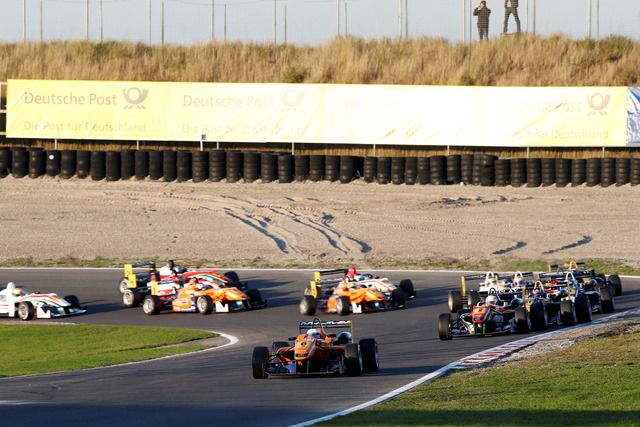 Felix Rosenqvist has closed to within just nine points of season-long championship leader Raffaele Marciello after he scored maximum points at Zandvoort while the Italian struggled. The Swede finished second behind guest driver Daniil Kvyat in race one and then won the other two races from pole position.

Marciello finished the first race where he started, in fifth. The Ferrari protege then stalled at the start of race two, finishing down in 16th. He was running back up in fifth in the final race until he went off and crashed into the barriers a few laps from the end.

Kvyat’s maiden win continued his impressive form of late, and the Russian followed it up with a third and a fourth in the remaining races.

Alex Lynn took a second and two third places to move back into third in the standings past Prema team-mate?Lucas Auer, who had a quiet weekend with just a couple of seventh places to show. Rookie Jordan King maintained his progress, following up his British series success with his best European weekend to date, claiming two fourths and a second place. He’s now up to sixth in the points, one spot behind more experienced team-mate Harry Tincknell.

Report: Rosenqvist closes in on the championship lead with race two victory

Next round: Vallelunga, 12-13 October

Marvin Kirchhofer closed the German F3 season in true fashion by winning the two main races at Hockenheim from pole position. The reverse grid race win went to Gustavo Menezes – the American scoring his second win of the season as he took fourth in the final standings as best non-Lotus driver.

Three podiums enabled Artem Markelov to beat team-mate Emil Bernstorff to the runner-up spot in the standings by just five points after a season-long scrap. 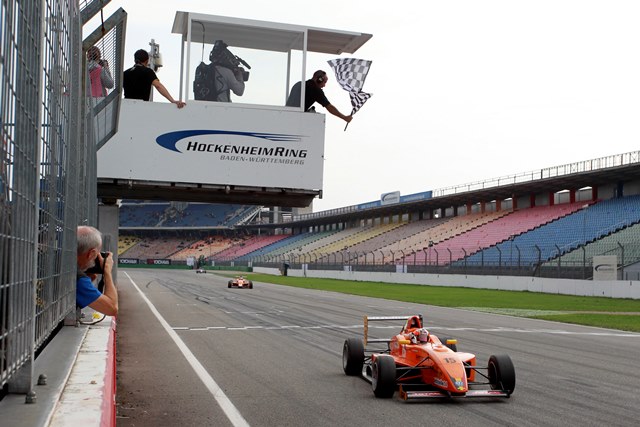 Picariello took his 11th and 12th wins of the year (Photo: ADAC)

Just like Kirchhofer, champion Alessio Picariello ended his campaign in fitting style by winning the two main races at Hockenheim. Nicolas Beer won the final race of the season, but Jason Kremer finished second to hold onto third in the standings.

Maximilian Gunther had taken his fourth double pole of the season for races one and two. He finished second to Picariello in the first race but lead the second race until being forced into retirement. He was ninth in race three, but still finished runner-up in the final championship standings.

Report: Picariello eases to race one victory at Hockenheim

Report: Picariello takes twelfth victory of the year at Hockenheim

Jake Hughes sealed the title with victory in the first race of the season finale at Donington Park, going on to finish sixth and fourth in the remaining races.

Charlie Robertson became the first driver to win more than one race in a weekend as he took victories in races two and three, jumping up to second place in the final standings as a result, past Seb Morris, Matthew Graham and Jack Barlow, who slipped from second to sixth after failing to finish in the top ten all weekend. 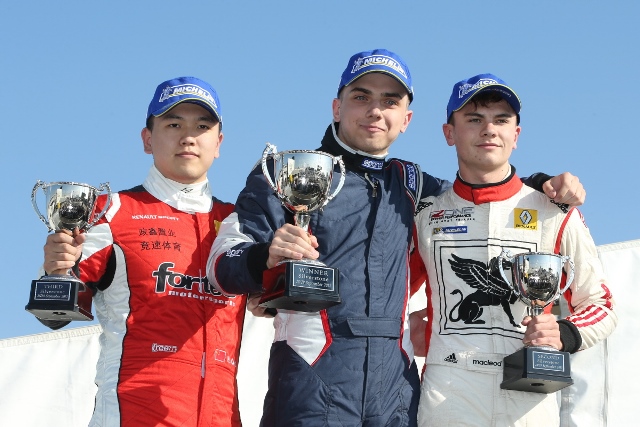 Ivan Taranov enjoyed a good return to the series after three weekends away, winning both races at the season finale at Silverstone.

After wrapping up the title at the previous round, Chris Middlehurst failed to finish both races – his first retirements of the season – after sustaining damage in contact with others. Jake Cook,?Weiron Tan, Sam MacLeod and Martin Cao all took turns on the podium in his absence.

Cevallos finished second in the final standings ahead of Jorge Cevallos, Cao, Cook and MacLeod.

With the title under his belt and a 100 per cent record intact, Dan Cammish departed ahead of the penultimate round at Silverstone and left the rest to scrap for their maiden wins. Cammish’s direct replacement?Max Marshall claimed a triple pole on his first appearance since 2011, but he was beaten off the line by team-mate Sam Brabham on all three occasions.

Brabham however would also end the weekend without a win. Contact with Juan Rosso allowed Camren Kaminsky to come through and win race one. In race two, Jayde Kruger passed Brabham to claim the victory, with Rosso taking second place. Harrison Scott, second to Cammish in the standings, took a well-deserved first win in race three.

Martin Rump won both races at the Nurburgring to pull away from his rivals in the title fight. He entered the round tied on points with Roy Geerts, but with Geerts finishing third twice, behind Janneau Esmeijer, the Estonian’s lead is up to 20 points. Esmeijer is a further 22 points behind with two weekends remaining.

Report: Rump does the double at Nurburgring

Champion Nakayama continues on his way

Having already wrapped up the title in August, Yuichi Nakayama continued his dominance at the penultimate weekend of the season at Sugo. He finished ahead of Katsumasa Chiyo and Nobuharu Matsushita in race one, while Tomoki Nojiri and Matsushita completed the podium in race two.

British F3 ace Felipe Guimaraes won both races at Brasilia to take the championship lead back away from rival Raphael Raucci. With just a six car grid, Guimaraes won the first race from pole position and then came through from fifth on the grid to win race two, maintaining his record of winning all the races he has finished this year.

Raucci’s consistent run of finishing every race inside the top two ended in race one when he retired. From the back (well, sixth) in race two he recovered to second, but is eight points behind with three weekends remaining.

If there was a flaw in Magnussen’s season, it was that he had only won two races. At Paul Ricard he proved he was the class of the field and was unbeaten in every session. He might have lost that first win, but proved on Sunday that he could be just as dominant with car deemed legal.