Carlos Sainz extended his Formula Renault 3.5 points lead significantly with a dominant weekend at Spa-Francorchamps. The Spaniard backed up his status as something of a specialist at the classic Belgian circuit with a pair of commanding victories from pole position. The weekend’s results have given Sainz a 43-point advantage at the head of the standings.

Sainz’s fellow Red Bull Junior Pierre Gasly enjoyed his best weekend yet in FR3.5. He joined Sainz on the front row in race one and finished a distant second after brake issues. He qualified a lowly 11th on Sunday, but enjoyed a strong race to finish fourth, finishing the weekend second in the standings.

Oliver Rowland had a difficult start to his weekend, qualifying down the order for race one before being delayed by a first-lap incident and forced to retire due to a fuel pressure problem. He bounced back on Sunday morning to qualify on the front row, and pushed Sainz in the first stint before a slow pitstop dropped him to third.

Will Stevens qualified a lowly 15th in race one, moving up to seventh in the race largely thanks to attrition ahead before finishing second on Sunday. Jazeman Jaafar scored his second consecutive podium in race one after racing from 14th to third, before taking sixth in race two. Although he qualified badly, Monaco winner Norman Nato took two fifth-place finishes.

Richie Stanaway was quick on his return to FR3.5 after two years away, but triggered a first-lap collision in race one and had third taken away from him in race two because he pitted outside of the permitted window. Sergey Sirotkin‘s awful luck continued, with the Russian now having suffered four consecutive retirements. He was an innocent victim of the first-lap crash in race one, before another car problem stopped in race two. 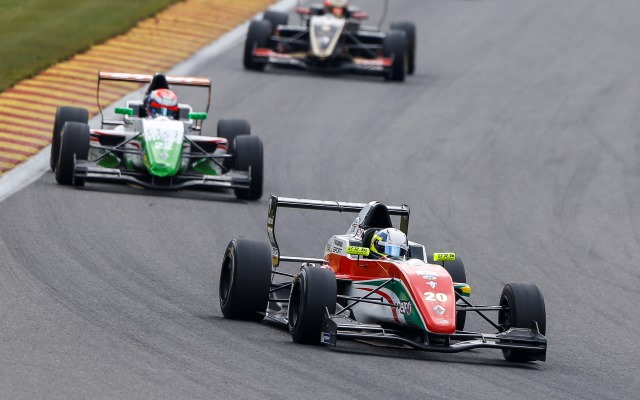 Eurocup Formula Renault 2.0 title favourite Nyck de Vries put himself in a position to extend his championship advantage at Spa by claiming pole position for both races, but he was denied on each occasion by the Prema Powerteam duo of Dennis Olsen and Bruno Bonifacio respectively.

After a low-key start to his rookie Eurocup campaign at Aragon, Olsen slipstreamed past de Vries at the start of race one to claim his maiden car racing victory. He then overcame an aggressive defence from de Vries to claim P2 on Sunday and rise into third place in the standings.

Although he only started eighth for race one, Bonifacio moved forward to claim his third consecutive P3 finish. Starting fourth in race two, he capitalised on Prema’s strong race pace to claim his first Eurocup win and tie for the points lead with de Vries, who ended the weekend with a second and a third and a four-place grid penalty for the next race for pushing Olsen onto the grass. 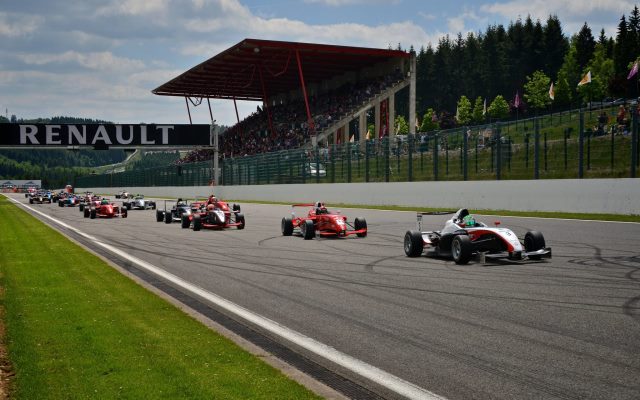 Second-year Dutch driver Esmeijer began both races from pole position, and claimed victory over De Pasquale by 0.4 and 0.8 seconds respectively. De Pasquale’s pair of second-places keeps him in the championship lead by 11 points.

Several drivers from the Nordic series made guest appearances, with Paul Blomqvist completing the podium in race one. Max Defourny moved up to third in the NEC standings after a fifth in race one and then third in race two. Zandvoort podium finisher Larry ten Voorde crashed out of race one and finished down in 13th in race two, while Ferdinand Habsburg also retired from race one before a sixth in race two. 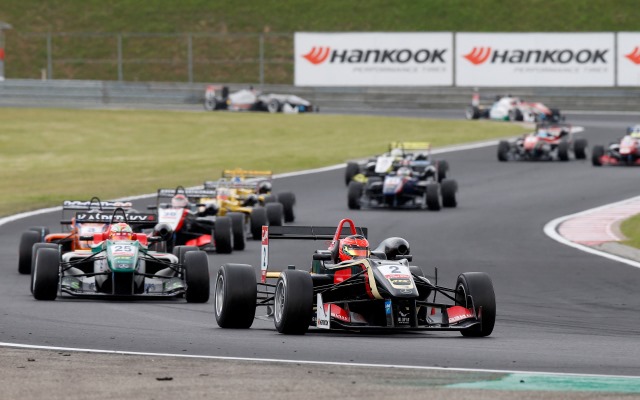 Esteban Ocon recovered from a lost win in race one in the FIA F3 European Championship at the Hungaroring to claim victory in races two and three. For the second consecutive round, the French rookie claimed pole for all three races but a poor start in race one allowed nearest rival Tom Blomqvist to score a commanding win, with Ocon fortunate to recover second early on.

Ocon took two dominant victories of his own in the remaining races though, while a poor second qualifying forced Blomqvist to settle for a fifth and a sixth. That gives Ocon an 82-point lead in the championship.

Ocon’s team-mate and fellow FR2.0 graduate Antonio Fuoco recovered from four straight non-scores to finish second in race two, a result he repeated in race three. Lucas Auer took a fourth and two thirds, while Mucke team-mate Felix Rosenqvist finished third in race one, fourth in race two and ran second in race three before being slapped with a penalty for not respecting track limits. Max Verstappen had been poised to finish third in race one but suffered a mechanical issue, and then lost fifth in race two to a track limits penalty before finally grabbing P4 in race three. 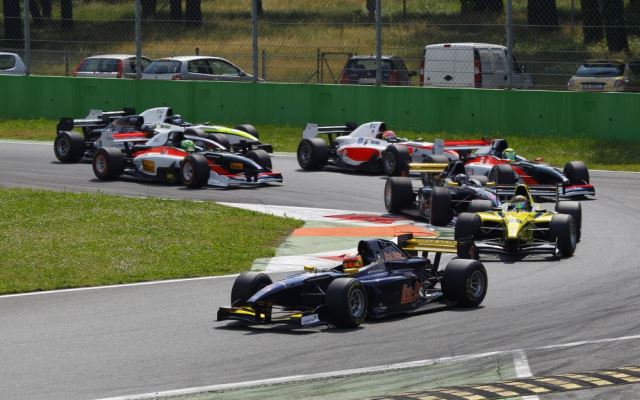 Kimiya Sato was absent from round four of the Auto GP season at Monza but continues to lead the standings despite the best efforts of Markus Pommer. The German driver won the first race of the weekend from pole position and then finished third in race two, bringing him to within nine points of Sato’s lead.

Tamas Pal Kiss found himself relegated down to third in the standings behind Pommer. He finished second in race one and then took a quiet fifth in race two. Kevin Giovesi chased Pommer in race one until a stuck wheel at his mandatory pitstop. That relegated him to eighth, which gave him reverse-grid pole for race two, from which the Italian led comfortably on his way to victory.

Michela Cerruti took a maiden podium in race one after holding off Andrea Roda, who went on to score his best Auto GP result with second in race two.

Protyre Formula Renault: Fittipaldi does the treble at Donington 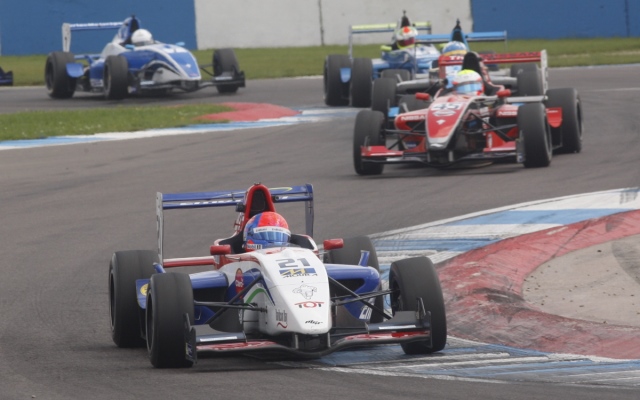 Pietro Fittpialdi took charge of Protyre Formula Renault by winning all three races of round two at Donington Park. The results were particularly impressive given that the Brazilian did not start on pole position once all weekend. Good starts were key, taking him past pole-sitter Alex Gill to win the first two races, while in race three he made quick progress from fourth on the grid. Fittipaldi was only third in the standings coming into the weekend, but now has a 25-point lead.

Piers Hickin took a second, a seventh and a third to hold second in the standings ahead of erstwhile leader Matteo Ferrer, who had a tough weekend. After a qualifying off, he finished fifth in race one and then fell to tenth in race two with front wing damage before finishing fourth in race three. Gill was unable to make the most of his two poles, and finished second, third and fifth.

Prema clearly know how to set up a Formula Renault 2.0 car for Spa-Francorchamps, but Eurocup rookie Dennis Olsen made the most of it with his win and second-place to throw his hat into the ring as a title contender in his rookie campaign. Fast and tenacious in battle, this may have only been his first win in single-seaters, but it’s unlikely to be his last. 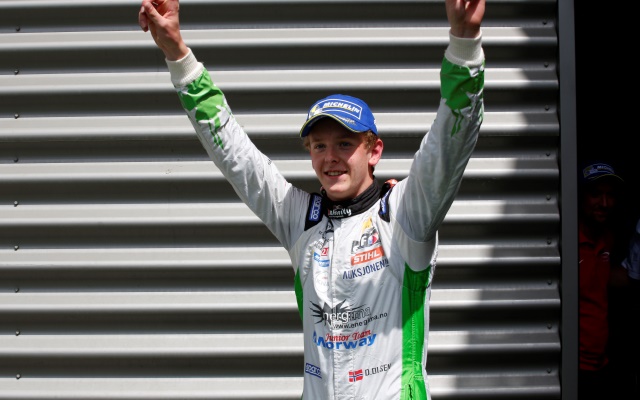