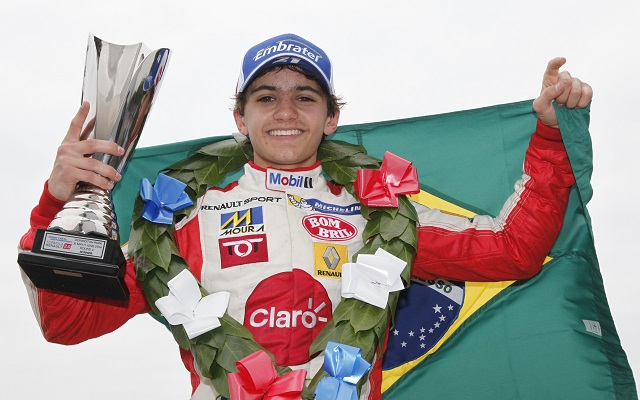 MGR Motorsport driver Pietro Fittipaldi topped off a sensational weekend with his third victory out of three races at Donington Park in round two of the Protyre Formula Renault championship.

The Brazilian started the race in fourth, but a strong start off the line saw him in second place by the end of lap one. He then managed to slip past teammate Colin Noble, Jr. for the lead on lap four with a decisive move at the hairpin. Although unable to open up a gap after that, he was never under too much pressure throughout the rest of the race.

Noble completed a 1-2 for MGR, while polesitter Piers Hickin had an eventful run to third. Having started on pole, the Scorpio Motorsport driver stalled at the start, before charging back up to third by the end of lap five. He stayed close to the leaders during the early laps, before switching to a defensive mode for the remainder of the race and eventually finishing third.

Matteo Ferrer lost out to teammate Fittipaldi at the start, and was passed by Hickin on lap five. He and Alex Gill completed what was a five-car train in the initial stages ?of the race. Gill ran Ferrer very close towards the end, before settling for fifth.

Cliff Dempsey Racing driver Patrick Dussault was not able to stay with the leading quintet, the Canadian being forced to race defensively ?by Hillspeed driver Dimitris Papanastasiou. The pair finished sixth and seventh, ahead of Dussault’s teammate TJ Fischer in eighth.

MGR’s fourth driver Tarun Reddy had a poor start, dropping down to eleventh from seventh, before ultimately finishing in ninth place, having passed Hayden Edmonds on lap nine. Edmonds was once again the top SWB driver, rounding off the top ten.

With his triple victory at Donington, Fittipaldi now leads the championship from Hickin, his tally standing at 174 points after two rounds.