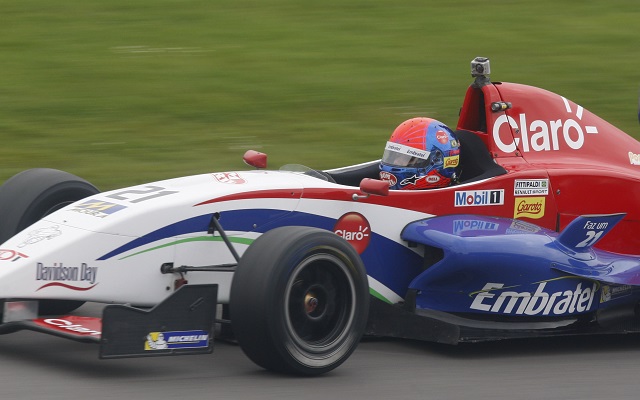 Brazilian driver Pietro Fittipaldi took his second win of the weekend with a faultless drive at Donington Park in the second round of the Protyre Formula Renault championship.

The 17-year-old MGR Motorsport driver replicated his good start from race one, jumping past polesitter Alex Gill. The Brazilian then pulled out a gap of four seconds by the end of the first eight laps and then managed his lead till the end of the race. Gill had to be content with second place, picking up his second podium of the weekend.

Behind the top two though, there was plenty of action at the start, with lots of positions being shuffled. Patrick Dussault had a strong getaway, vaulting up from sixth to third. However, the Canadian then made a mistake on lap five, losing three places to Tarun Reddy, Matteo Ferrer and Colin Noble, Jr.

Ferrer tried to get past Reddy for third, but contact was made and the Italian dropped down the order with a broken front wing. Dussault managed to sneak past Noble on the same lap.

Reddy spent the rest of the race with a huge train of cars behind him, but the Indian managed to hold off the advances of Dussault, taking his first podium finish of the season.

Dussault came home fourth, while Noble managed to narrowly stay ahead of Dimitris Papanastasiou, the pair finishing fifth and sixth. Behind them, Piers Hickin recovered from a shocker of a start, which saw him down in twelfth, to finish in seventh place, taking the fastest lap of the race in the process.

Hayden Edmonds was the top SWB driver in eighth place, ahead of car rookie Samuel Oram-Jones, with Ferrer nursing his damaged MGR car to the finish in tenth place.