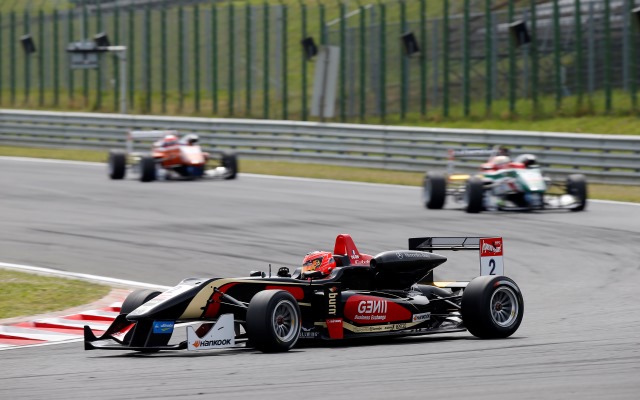 Esteban Ocon collected his second win of the weekend in a third FIA F3 European Championship race a the Hungaroring that was shortened by rain.

The Frenchman didn’t appear to make the best of starts from pole position, but he defended his lead well. Felix Rosenqvist moved into second place past Mucke team-mate Lucas Auer, who was then relegated to fourth at the chicane by Antonio Fuoco.

Ocon gradually opened up a two second lead over Rosenqvist when the F3 veteran was handed a drive-through penalty for exceeding track limits.

After he served that, Ocon extended his leading margin to eight seconds when rain began to fall. As the conditions worsened, race control opted to throw a safety car and then a red flag.

Ocon’s fifth victory of the season – and the first time he has won twice in a weekend – saw him add another 25 points to his tally and extend his series lead to 82 points.

Fuoco and Auer repeated their race two results with second and third respectively. Max Verstappen scored points for the first time since the first race at Pau in fourth ahead of the Jagonya Ayam with Carlin pairing of Antonio Giovinazzi and Tom Blomqvist, who made up for losing a place at the start by taking sixth from Felix Serralles with a late dive at turn one before the rain came.