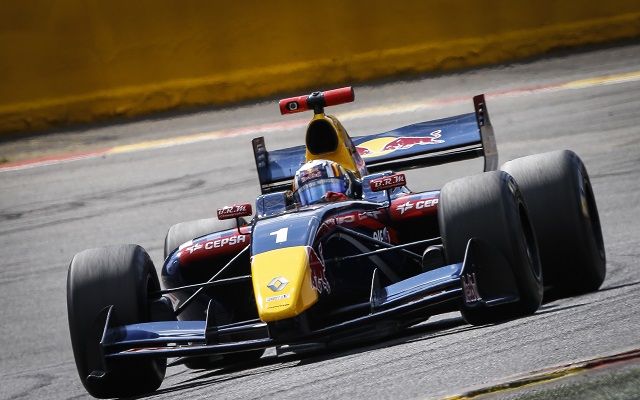 Spanish racer Carlos Sainz completed a clean sweep of the Formula Renault 3.5 round at Spa-Francorchamps with a confident victory in race two.

While his performance was somewhat less dominant than his victory on Saturday, he ended up crossing the finish line way clear of his rivals.

Fellow front row starter Oliver Rowland managed a solid getaway off the line and challenged Sainz into turn one, but the Spaniard managed to prevent him from making a pass around the outside.

Sainz then impressively defended his lead into Les Combes and went on to establish a more comfortable gap over the field. However, Rowland was the one driver who managed to keep up with the rapid DAMS man, staying within two seconds of the Spaniard for the opening stint of the race.

As the mandatory pit strategies began unfolding, a number of drivers opted for an early stop. Pierre Gasly and Sergey Sirotkin, both struggling during the early laps, were among the first to come in, and, while Gasly emerged in clean air, fended off Norman Nato and proceeded to post quick laps, Sirotkin had to pull over with car issues right away.

With those who stopped early showing better pace upon re-entering the track, a lot of drivers shortly followed suit. Both Sainz and Rowland took to the pits on the same lap and, while the Spaniard’s stop went off without a hitch, the Fortec driver had an issue and lost a lot of precious seconds.

After the disastrous stop, Rowland wound up rejoining narrowly ahead of Gasly but behind Will Stevens. Sainz, at that point, was almost ten seconds up the road and would not have to worry about being challenged for the win.

Richie Stanaway, who ran out front for much of the race, left his stop very late and managed to come out ahead of Rowland. However, he was almost immediately given a 20-second penalty in added time for stopping outside of the pit window, rendering his podium hopes void.

As such, with Sainz cruising to his fourth win of the season, Brits Stevens and Rowland completed the podium. Gasly was classified in fourth ahead of Nato, Jazeman Jaafar, Matias Laine and the demoted Stanaway.

Meindert van Buuren managed to fend off numerous drivers to pick up two points in ninth, while Marco Sorensen recovered from stalling in the pitlane to pick up tenth.

In addition to Sirotkin, the race saw three other drivers not make it to the checkered flag. Zoel Amberg stalled on the grid at the start, while Pietro Fantin was knocked into the barriers at Les Combes during lap one. Finally, Fantin’s teammate Luca Ghiotto had to pull over nine laps later.