written by Valentin Khorounzhiy 22 May 2013

Even despite a technical infringement that cost the Italian a race win, Marciello’s dominance at Brands Hatch leaves the European F3 title looking as good as decided…

Three wins from Prema in a near-perfect weekend, marred by a technical mistake

While other rounds of the championship saw a more balanced distribution of pace between the teams, at Brands it was all about Prema. And, as usual, their charge was led by one Raffaele Marciello, who continued to dominate the series in a mighty fashion. After narrowly missing out on the win in race one and despite not getting to start from pole in the three races, race two saw him have the lead by turn one and keep it until the checkered flag. Race three was the same scenario. Unfortunately for the Italian racer, a technical infringement with gear ratio length robbed him of his seventh victory of the season, but he won’t be losing much sleep over that, as his lead in the championship still appears rather unassailable.

Then there was Alex Lynn, who secured pole for all the three races and was looking to have his best weekend to date with overtaking a massive challenge at the track. He won race one, keeping Marciello at bay, and, while he lost the lead into turn one, he managed to take a commendable second. Race three followed a similar pattern right up to the point where the Brit spun on track and was forced into retirement, a stain on an otherwise stellar weekend. 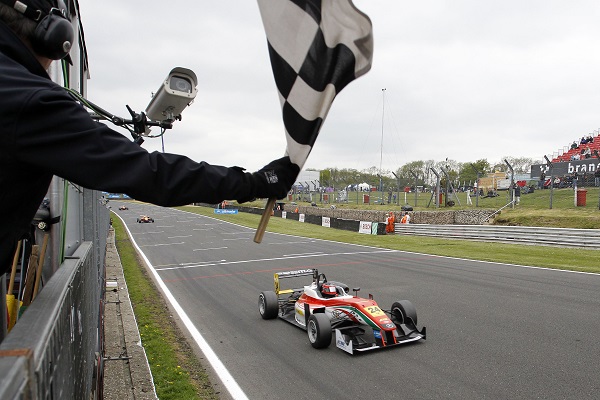 Despite not standing on top of the podium, Lucas Auer is now an FIA F3 race winner (Photo: FIA F3)

Lucas Auer will be the one with no complaints about his weekend after the three races. He qualified third in all of them and completed Prema 1-2-3s in race one and two, even managing some brilliant overtakes. After race three and Marciello’s disqualification, he found himself the recipient of a maiden win.

Mucke’s Felix Rosenqvist and Carlin’s Harry Tincknell remained in their usual roles, trying to chip at Prema’s dominance. Both recorded podium finishes and were generally best of the rest, but the pace to challenge Prema was not there in qualifying or the races. Felix Serralles, and Fortec overall, meanwhile, had a miserable time, failing to add to his points tally after the excellent Hockenheim performance.

Finally, some of the smaller teams allowed for performances to remember. Tom Blomqvist was his usual consistent self, with good points finishes over the three races, while Sven Muller was something else entirely. The German was inches away from his first podium of the season before retiring with a mechanical problem, but made up for it with two great finishes in the other races.’ 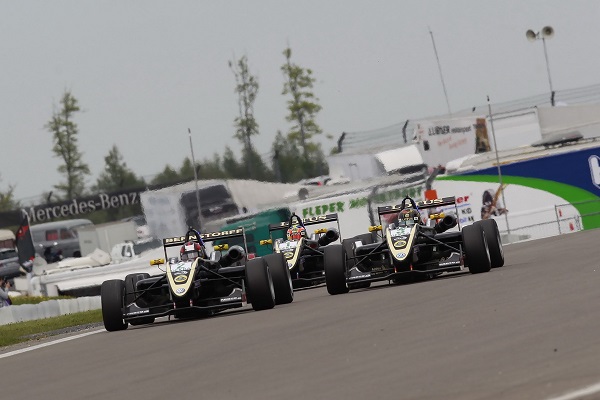 While Prema completely obliterated the field in European F3, in German F3 it was the Lotus team which reigned over the two races at Nurburgring, as the reverse-grid outing did not happen due to limited time and fog. Series leader Marvin Kirchhofer continued to be the man to beat and found himself rather thoroughly beaten in qualifying. He made a superb comeback in the races, though, going from fourth to second in race one before taking the win in the other race to emerge as the rounds’ best scorer, proving his abilities in wheel-to-wheel racing.

Emil Bernstorff took over from Kirchhofer as the poleman for the feature races of the round and looked very mighty in race one, keeping the feisty German at bay to take his second win. In race two, he only managed third due to technical mishaps, but, after a rocky start to the year, he shouldn’t be too disappointed with a nice, consistent round.

Artem Markelov is still chasing that win, but was on the podium yet again in both races, adding yet another second place to his record. He’s still ahead of Bernstorff in the standings, but Kirchhofer is noticeably getting away, and the Russian might want to stop settling for second if he wants to be a part of the fight.

For Performance Racing, it was a weekend of damage limitations. Since Lotus locked out both podiums, the best they could do was fourth and in both races that honour belonged to their team leader, John Bryant-Meisner, who continues to do his best to keep up with the Lotus men in the standings. Thomas Jager and Yannick Mettler were, as usual, right behind him in both races, while Gustavo Menezes of the Van Amersfoort squad couldn’t challenge either of the big teams this time and finished behind their contingents.

In the Trophy class, GU-Racing’s Freddy Killensberger and Sebastian Balthasar were at it again, and Killensberger emerged better off with one win. The other win went to Hubertus-Carlos Vier, who’s doing a stellar job of keeping up with the two leaders in the standings.

Next round: Sachsenring, 8-9 June

Brits set the pace, but the tricky street circuit denies them the win 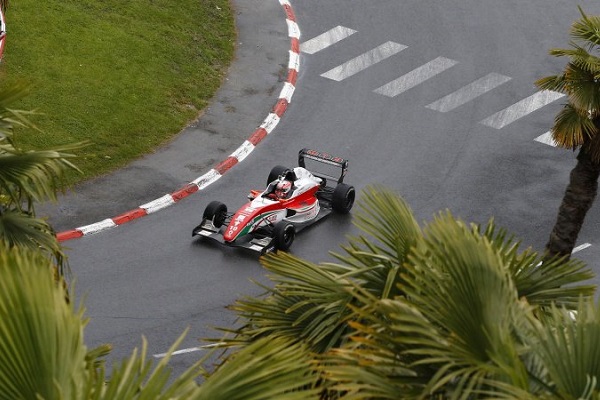 Ghiotto was there to pick up the spoils of war between Fortec teammates (Photo: Renault Sport)

The Formula Renault 2.0 non-championship round at Pau came up a little short of the stars that it appeared to attract, but even with a few people non-present, the grid that did turn up was stellar in every single way.

Fortec Motorsport brought in a killer lineup, with junior rising stars in Matt Parry and Alfonso Celis and a proven winner in Jake Dennis. It was Parry who’d take the reigns over the weekend, putting himself on pole for the qualifying race and then winning that with ease. Dennis lined up alongside him for the main event and things looked very smooth for Fortec.

Alas, it was not to be. Celis was the catalyst for a safety car in the man race and, on restart, the two Fortec Brits came together, clogging up the track to bring out a red flag and losing track position. In the end, Dennis was third and Parry fifth, which was hardly the result the two young champions were hoping for.

Tech 1 brought in a very strong lineup, with experienced drivers in Matthieu Vaxiviere and Pierre Gasly and a rookie in Egor Orudzhev. The Frenchmen had a weekend to forget – Vaxiviere crashed out in the main event, while Gasly’s drive through nearly ended up in a disqualification and demoted him to seventh overall. Orudzhev, meanwhile, not having been a frontrunner for the majority of the weekend, found himself on the podium of the Grand Prix, as he finished second.

Manor brought in one driver, Oliver Rowland, who, unsurprisingly, was always there or thereabout in the fight for the lead. He was third in the qualifier race, but ended up outside the podium in the main race, again ending up behind fellow RSF man Dennis.

Where the other teams stumbled, it was Prema’s drivers who picked up the spoils. Bruno Bonifacio appeared to be the team’s leader for the event, taking fifth for the main race yet generally managing to run in the vicinity in the top three. He failed to take advantage of the Fortec incident as he was penalised for passing under yellows – a mistake that potentially cost him the win.?Luca Ghiotto was the quieter man over the weekend, but with the hectic main event, that proved to be one worthwhile skill to have and, after the penalties have been served and the order of the race clarified, it was the Italian who was in the lead. He kept that lead for three more laps to become the winner of this year’s Pau Grand Prix.

Hubert continues to leave the rest in the dust

French prodigy Anthoine Hubert maintained his monopoly over the feature races in the series, taking double pole and encountering little resistance on his way to victories in race one and race three. In race two, he didn’t produce one of his better results, finishing only fourth, but that proved more than enough to maintain a supreme lead in the standings.

The fight for second in the standings, meanwhile, raged on 80 points adrift. Jules Gounon was quiet in the feature races, but his reverse-grid win allowed him to stand as Hubert’s primary challenger after Pau. Simo Muhonen added several strong results to his win in round one and sits in third, while Felix Hirsiger added another podium to his resume, but isn’t any higher in the points’ table due to a mishap in race three.

Next round: Spa-Francorchamps, 8-9 June

Three different winners again, yet the contenders start to emerge

The second round of BRDC F4, taking place at Brands Hatch, again produced three different winners and Seb Morris, yet again, wasnt’t one of them. However, whilst the pre-season favorite enjoyed an excellent first round that saw him lead the series, his round two was marred by a bad qualifying and he barely secured any points.

A win and another podium for Jake Dalton allowed him to take the lead of the series, but him and Charlie Robertson were practically toe-in-toe for the entire weekend, with the HHC man also securing a win and appearing on the podium for the other two races.

The round also saw another win for Matt Bell, as well as one-off podiums for Falco Wauer, Raoul Hyman and debutant James Fletcher. The lack of consistency from most series participants sees the trio of Robertson, Bell and Dalton embroiled in an almost exclusive fight for the series lead.

The new series kicked off at Zandvoort and saw Martin Rump make an expected great start with a double pole success. Yet, in race one, Rump allowed the victory to slip away from him, losing out to Roy Geerts by less than a second due to a mistake under braking. He was the clear victor in the wet race two however, beating Tommy van Erp by four seconds. Paul Blomqvist was third in both races.

PaddockScout Driver of the Weekend:

It was a close one between the Italian and German F3’s Marvin Kirchhofer, but in the end, there was simply nothing to criticize about the performance of Prema’s top man. Marciello was brilliant over the three races, driving like a champion and showing great skills in managing the gap to his teammates. His race three disqualification was the result of the team’s mistake, came due to an infringement that gave him no substantial advantage and took away what was otherwise a perfectly legitimate, fine win.

Yelloly returns to FR3.5 in Monaco with Zeta Corse