Roundup: Marciello closes in on title with two Vallelunga wins 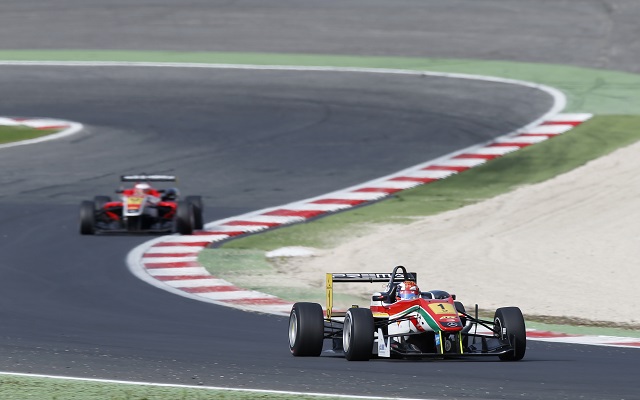 Marciello did all he could to build up a points advantage ahead of the Hockenheim decider (Photo: FIA F3)

With the European F3 title fight distilled to one leader in Raffaele Marciello and one chaser in Felix Rosenqvist rather early on, the duo have been taking turns to outscore each other for most of the second half of the calendar.

At Vallelunga, the ball was in Marciello’s court, as, on a track that both he and his team knew rather well, there was no matching the Ferrari junior. Unsurprisingly, Marciello topped both qualifying sessions despite the tricky weather conditions (narrowly missing out on race two pole on second-best times) and proceeded to cruise to victory in both races one and three. His weekend was dented in the second race, as Marciello’s Prema machine ended up breaking down on the grid, which denied him the chance to put the title beyond doubt before the season finale at Hockenheim.

Marciello’s title ambitions were helped out by Rosenqvist’s continued woes throughout the weekend. With the Mucke car struggling for pace on the Italian track, Rosenqvist’s shunt in qualifying one didn’t help matters, as changeable conditions would leave him last on the grid for the first two races. To the Swede’s credit, he valiantly made his way into the top ten on both occasions, and then proceeded to go from 13th on the grid to sixth in race three. Ahead of the finale at Hockenheim, that now leaves him a whopping 45.5 points off of Marciello with 75 up for grabs. 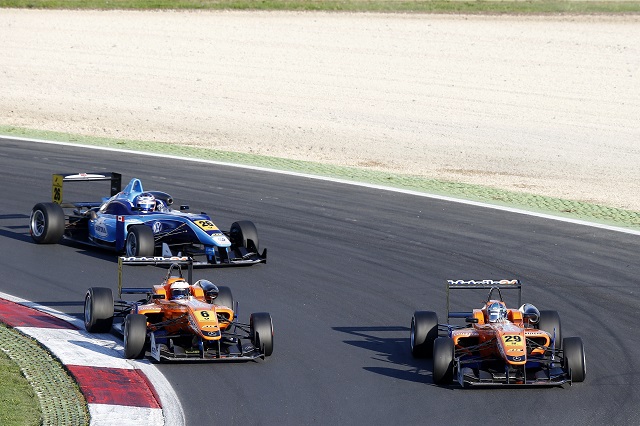 Rosenqvist pulled off an impressive amount of overtakes from the back of the grid (Photo: FIA F3)

The continued fight for third in the championship between Prema teammates Alex Lynn and Lucas Auer saw the former practically secure the spot. The Briton had a very strong weekend, punctuated with a stellar victory in race two, while the Austrian ended up bogged down in the top ten on all three occasions, with the third race providing his second retirement of the year. Meanwhile, their final teammate, Eddie Cheever, made an outright stellar case for being retained by the team in 2014. Undoubtedly bolstered by track knowledge, the local driver scored two of his best finishes in the championship in fourth and fifth and, despite an unlucky early retirement in race three, will have a lot to take from this weekend.

With Prema running the show at home turf, it was yet again a fight between Carlin and Fortec for the occasional podium finish. For Carlin, Daniil Kvyat continued his strong streak of recent performances, with three top-ten finishes and, among them, a podium. Fortec regulars Pipo Derani and Felix Serralles were also in contention for top three spots and, while the Brazilian managed to repeat his career best FIA F3 finish of second in race three, Serralles had a very erratic weekend, crashing out of the top ten on all three occasions.

Finally, while victory continues to elude T-Sport’s guest veteran Alexander Sims in FIA F3 this year, he had another fantastic weekend, finishing it as the only driver in the field to make it to the podium all three times.

Report: Marciello bounces back in race three at Vallelunga

Next round: Hockenheim, October 19-20 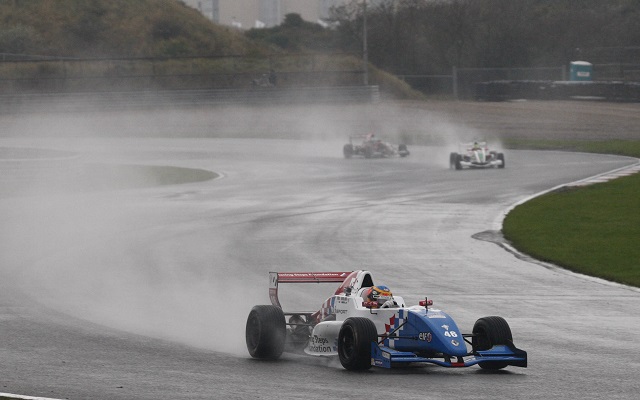 With a 75-point advantage over the nearest rival in the standings and 90 available in the season finale at Zandvoort, Matt Parry was expected to have little trouble in securing the championship. Indeed, that prediction came to light, as a fourth-place finish in race one saw the young Welshman crowned the Formula Renault 2.0 2013 champion.

While Parry and title rival Jack Aitken placed comfortably in the top ten in qualifying, it was Eurocup title contender Oliver Rowland who stole the show, taking double pole with breakthrough performer Alfonso Celis lining up alongside.

Rowland would prove completely untouchable in race one, calmly running off with the victory as other Eurocup guests and NEC regulars fought it ouf for the final podium slots. Eventually, Raoul Owens pipped Steijn Schothorst for second just before the closing stages safety car, only to lose the car in the final corners of the race, putting a dent on an otherwise excellent performance. Schothorst, therefore, inherited second, with another Eurocup man Andrea Pizzitola rounding out the podium. The trio of frontrunning NEC regulars – Parry, Aitken and Dennis Olsen – followed through, which marked the official end of the 2013 title fight.

It was for the best for Parry to put the championship beyond doubt in race one, because he would wind up retiring early on in race two, which set the tone for a hectic event in very wet conditions. Safety cars and incidents aside, Rowland was once again imperious, while RC Formula’s Roman Mavlanov made the most of a good qualifying to take second away from Celis – with both of them securing first podiums of the season. Among the other NEC regulars, Aitken shined, overtaking both Olsen and Schothorst for P4 in the end of the race.

The weather conditions turned so tough ahead of race three that it ended up called off, putting an early end to a very entertaining round.

Anthoine Hubert crowned champion despite missing out on race wins 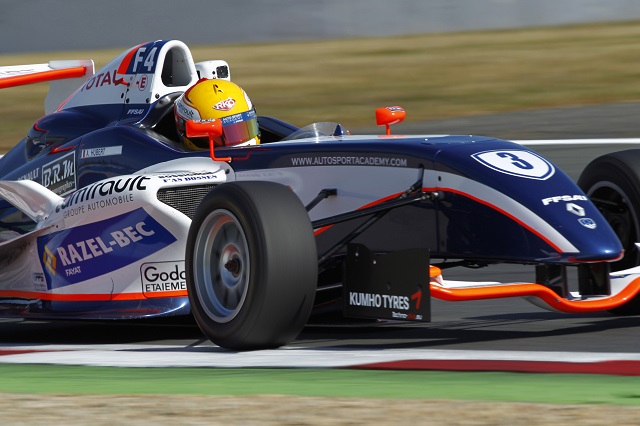 Despite a few bumps down the road, Hubert emerged from Ledenon as the deserved French F4 champion (Photo: DPPI)

Following a somewhat difficult outing at previous Magny-Cours, Anthoine Hubert has at last secured the French F4 championship title, having been largely dominant in the series throughout the whole year.

Things didn’t go quite as smoothly as hoped for the championship leader, though, as he had to be crowned champion twice over throughout the Ledenon outing. He won race one from pole, which would mathematically give him the trophy – however, he was denied early celebrations post-race, when the stewards deemed his corner one defending against Jules Gounon illegal. Gounon, his chief title rival, ended up inheriting the victory as Hubert was demoted to the outskirts of the top ten. The usual suspects at the front – Felix Hirsiger, Tristan Viidas and Matevos Isaakyan – completed the top ten.

The reverse-grid race two wound up being the highlight of the weekend, punctuated with an excellent fight for first between front row starters Tom Le Coq and Remy Deguffroy. At the checkered flag, Le Coq, who was defending almost non-stop for 14 laps, held on to his first win.

Gounon looked set to outscore Hubert, possibly harboring the chance of keeping the title fight alive, but a messy move on French F4 newcomer Paul Hokfelt landed him a penalty. As such, Hubert, who finished narrowly behind third-placed Neal van Vaerenbergh, was finally confirmed as the champion.

Race three ended up being the most straightforward, as Gounon converted a front row start into a victory, followed by poleman Viidas, Hubert and Hirsiger.

Report: Hubert made to wait as Gounon is given Ledenon win

Report: Hubert made to wait as Gounon is given Ledenon win

Rosso closes out season with three victories at Brands

The tenth round of the Formula Ford 2013 season has given us the ninth triple victory, yet, for the first time, it was not courtesy of the series champion Dan Cammish.

Again, just like in the penultimate round, it seemed that the fight for victories would be blown wide open. Qualifying seemed to confirm that, with James Abbott, series debutant Simon Rudd and regular frontrunner Juan Angel Rosso shared the poles for the three races.

In race one, Rosso got ahead of both Abbott and Rudd on lap one, subsequently cruising to victory. The poleman managed to keep up with Rosso for most of the race, but eventually lost ground and ended up surrendering second to Harrison Scott on the final lap.

Starting from the front row in race two, Rosso was, again, into the lead on lap one. He enjoyed another controlled race, eventually crossing the line around two seconds ahead of nearest rival Jayde Kruger, as Scott took another podium in third.

Finally, in a rather messy final race in difficult conditions, Rosso was one of the few drivers to enjoy a rather trouble-free run, as he converted pole into win number three. The podium was rounded out by privateer drivers Andy Richardson and Abbott.

Geerts decreases gap to Rump ahead of season finale 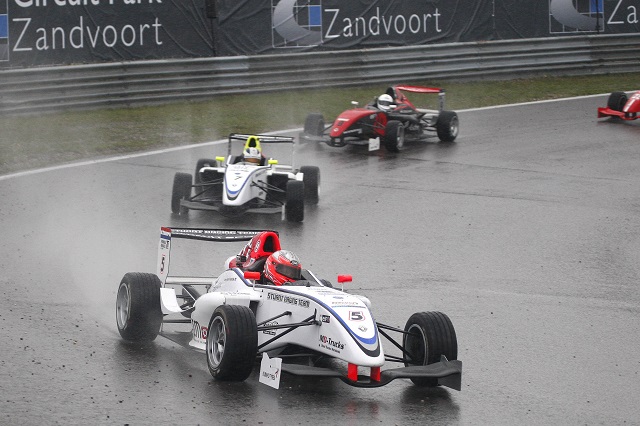 Dutchman Roy Geerts kept the FR1.6 NEC title fight alive and well in the penultimate round of the series at Zandvoort, as he took sixteen points out of Martin Rump‘s lead in the championship.

While Larry ten Voorde starred in qualifying, taking double pole, it was Geerts who stole the spotlight in race one, stealing the lead from his compatriot on the opening lap and keeping him at bay until the checkered flag. With ten Voorde taking second, Rump finished third, with another championship frontrunner Janneau Esmeijer taking fourth.

Race two took place in rather extreme weather conditions and, as such, barely saw any laps of green flag running. The first racing stint in-between safety car periods saw Esmeijer exit the race early, while the second resulted in a red flag. Therefore, the podium ended up the same – with ten Voorde winning and Geerts taking second on lap countback, ahead of Rump and championship rookie Jan Schwitter.

Ahead of the series finale at Assen, Rump leads Geerts by 6 points. Esmeijer is barely hanging on to title hopes in third, 58 points off of Rump with 60 available.

His dominance at Vallelunga might’ve been rather expected, but surely was no small feat, given the pressure mounted on the Ferrari junior after Zandvoort. Two wins in two races and a retirement that was out of his hands wound up giving him a nice points gap ahead of Hockenheim and, really, there isn’t much more Prema could ask for.