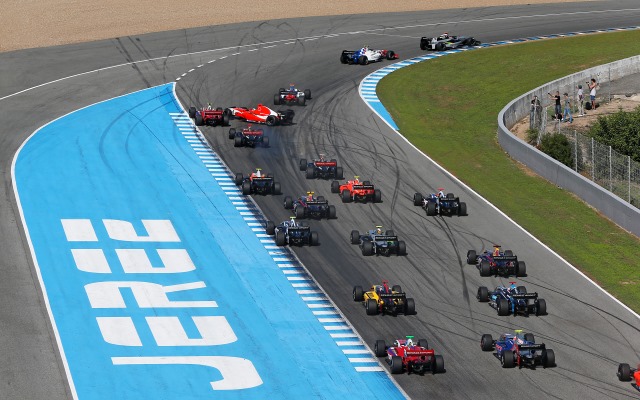 Carlos Sainz wrapped up the Formula Renault 3.5 title despite not scoring at the Jerez finale. The crown was sealed when Roberto Merhi was involved in a first-corner collision having needed to win to deny Sainz. Sainz struggled for pace all weekend, finishing ninth in race one before a penalty for contact dropped him to 15th, followed by 11th in race two. Merhi had an even worse weekend, ending up with a double retirement after a technical problem in his pitstop. That had come after he was denied pole by a penalty for impeding.

Will Stevens marked his first race since joining Marussia by getting on top of his qualifying woes to take his maiden pole and convert that into his second win of the year. The lack of pace returned on Sunday though, restricting him to 13th and leaving him sixth in the final points.

Stevens held off a late charge in race one from Oliver Rowland, denying the Racing Steps Foundation ace by less than a tenth of a second. Rowland inherited pole for race two after Merhi’s penalty, and went on to score a dominant second win of the year. He finished fourth in the standings, just two points behind Merhi.

Pierre Gasly took the runner-up spot away from Merhi despite his run of four straight podiums coming to an end. He would have to settle for sixth in race one after a superb defensive effort by Beitske Visser, while in race two he finished fourth as Arden team-mate Will Buller held him off for his first podium. A surprise second was Nicholas Latifi, whose decision to choose FR3.5 over F3 this weekend paid off. Sergey Sirotkin finished within half a second of the win in third place on Saturday, and fifth on Sunday, as he took P5 in the championship. 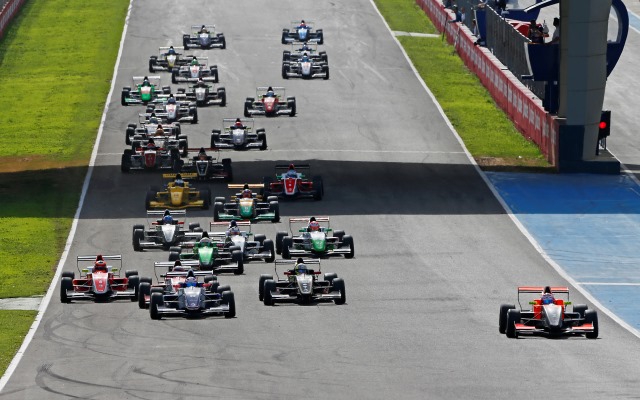 Nyck de Vries completed his time in Formula Renault 2.0 with maximum points at the Eurocup finale at Jerez. The champion pulled off a move on his rival Dennis Olsen to win the first race and finished second in race two to end up with more than double the points of runner-up Olsen, who was excluded from second in race one for a technical infringement and was seventh in race two.

It was George Russell who beat de Vries to the win in race two after claiming a shock pole position. The 16-year-old was making his second wildcard appearance in the Eurocup, and his first race weekend with the Tech 1 team. He had earlier shown promise with fifth place in race one, and has marked himself out as one to watch next year should he join the series on a full-time basis.

Fellow Briton Jack Aitken ended the year with a flourish, inheriting second in race one after Olsen’s penalty and then taking third in race two, promoting him up to seventh in the final standings. Getting up to third was Lotus junior Alex Albon thanks to a fourth and fifth from the two races, while Andrea Pizzitola failed to score and fell to fourth. Hans Villemi scored a maiden podium after Prema team-mate Olsen’s exclusion. 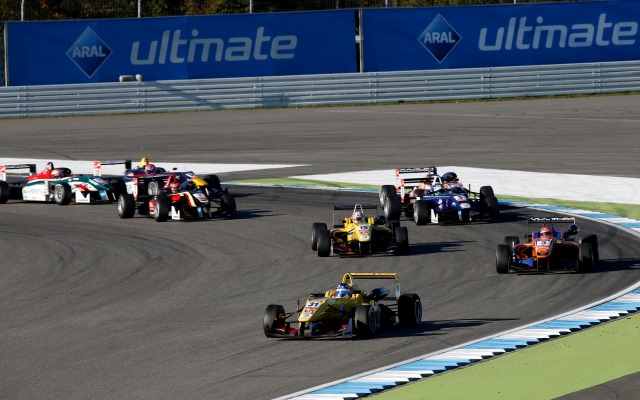 Tom Blomqvist overhauled Max Verstappen for the runner-up spot in the FIA F3 European Championship at the final round at Hockenheim. Toro Rosso recruit Verstappen had extended his advantage in race one with his tenth win of the season – more than anyone else. However, a poor second qualifying session left him with work to do, salvaging a fifth and a sixth.

Blomqvist had finished third in race one, and then won race two from pole position. He was on pole again for race three, and third place was enough to secure him the P2 spot.

Lucas Auer was on the pace all weekend at a circuit he won at earlier in the year. He was second in race one, third in race two and then claimed his third win of the year in race three as he ended the year fourth in the standings. Antonio Fuoco held on to fifth despite a point-less weekend, including a race two crash that broke a finger and saw him skip race three. Antonio Giovinazzi took sixth after a fourth, a second and a fifth, ahead of Jordan King, who was sixth, 14th and second.

Champion Esteban Ocon had a quiet weekend as his Prema team seemingly struggled for pace, making do with a seventh, a fourth and a seventh, succumbing to Verstappen in the last race in a close side-by-side duel. The last chapter of their 2014 rivalry will come at Macau next month. 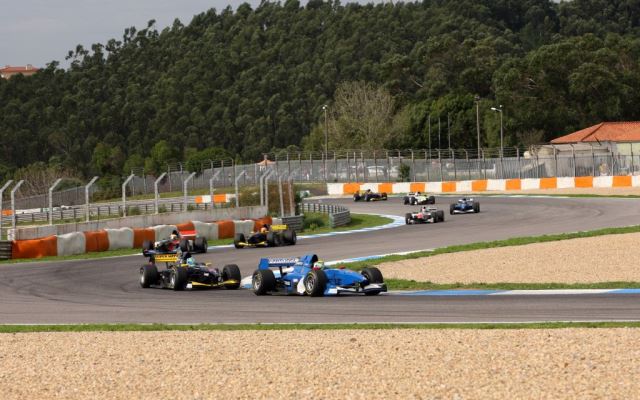 In the absence of champion Kimiya Sato, Tamas Pal Kiss took victory in the first race of the Auto GP final round at Estoril, securing him second place in the final standings. Kiss was fourth in race two, which wasn’t enough for his Virtuosi squad to overhaul Super Nova for the teams’ title.

2013 champion Vittorio Ghirelli returned for the third time this season for Super Nova, this time in place of the injured Michela Cerruti, and finished second in race one ahead of team-mate Markus Pommer. Ghirelli retired from race two, while Pommer was fifth – but the German F3 champion still did enough for P3 in the standings ahead of Andrea Roda (was was a quiet fifth and eighth in Portugal) and Kevin Giovesi, who withdrew from the event.

Sato’s compatriot and Euronova team-mate Shinya Michimi won race two ahead of debutant Luis Sa Silva and ex-Formula 1 driver Antonio Pizzonia, who returned to the series after previously appearing at the end of 2012. 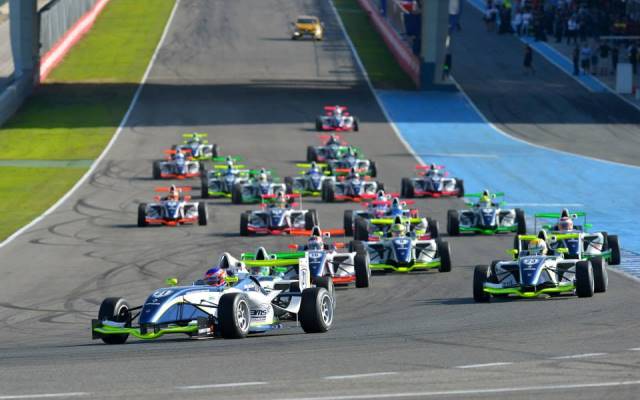 Lasse Sorensen claimed the French F4 title with a round to spare after his seventh win of the season in the third race at Jerez. The Dane, younger brother of Marco, had earlier finished second in race one and seventh in race two. His closest rival Felix Hirsiger had a best result of just ninth from the weekend, and so he was leapfrogged by Dorian Boccolacci, who was fourth and sixth in the opening races but back in 20th in race three.

After topping qualifying, Joseph Mawson returned to the first step in race one for the first time since the season opener at Le Mans. He suffered contact in race two and was then passed by Sorensen for the win in race three. The race one podium was completed by Patricio O’Ward, while Valentin Moineault took his turn on the rostrum in race three. 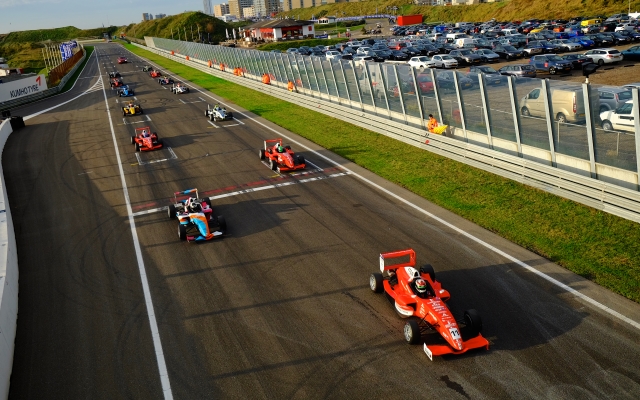 Dominant Formula Renault 1.6 NEC ace Anton De Pasquale wrapped up the title with victory in the first race of the Zandvoort finale triple header. The Australian took his ninth and final win of the campaign in race two and finished back in seventh in a chaotic last race.

Florian Janits came through to win that final race, having finished fourth in race one and then third in race two as part of a 1-2-3-4 finish for the Lechner squad. Ferdinand Habsburg was second in races one and two to climb to fourth in the standings before ending his weekend with a ninth.

2013 champion Roy Geerts returned and finished third in race one before a non-finish and a tenth. Runner-up Ralf Aron and Boris Kolff completed the race three podium behind Janits. Early title contender Janneau Esmeijer was absent from the final round, dropping him from third to sixth behind Janits, Habsburg and Max Defourny. 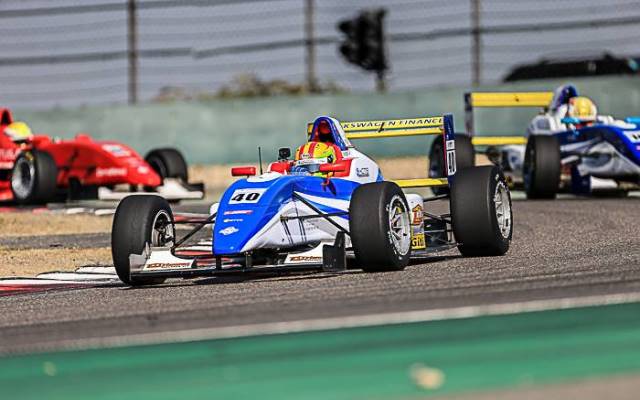 James Munro sealed the Formula Masters China title at the final round in Shanghai. The New Zealander won the first race, as rival Matthew Solomon failed to score due to gearbox issues.

Munro then finished fifth in race two – one spot behind Solomon – to put the title beyond doubt. He ended the season with a fourth place.

Fellow Antipodean Jake Parsons claimed the win in race two, preceded and followed by second-place finishes. Dan Wells was the victor in race three having finished in P3 in the earlier two races.

Toby Sowery claimed two of the four wins on offer at the opening round of the 2015-16 MRF Challenge in Qatar. The 18-year-old – who won the MSV F3 Cup in his first season of car racing in 2014 – was dominant in qualifying and won the first race by 18 seconds in just over 30 minutes. Third in the reverse grid second race, a poor start in race three consigned him to third again before winning the fourth and final encounter.

Indian driver Tarun Reddy was sixth in race one, and won race two from reverse grid pole. He was seventh and fifth in the two Saturday races races. Compatriot Raj Bharath was only ninth and seventh in the two Friday races, but claimed a victory and a second place on the Saturday.

The FA1 series concluded after a four month break with two races at Assen, both won by former GP2 and Formula Renault 3.5 racer Nigel Melker, who became champion. His season-long rival Mirko Bortolotti was absent, but Melker did have competition for the weekend from Dani Clos, who had been involved since its inception but not yet raced.

After Melker won the first race, Clos started the second from pole but was passed by Melker early on and the Dutchman went on to win by a staggering 38 seconds.

Sergio Campana and Richard Gonda joined Melker on the race one podium, while Clos finished back in fifth after a slow stop, behind Nathanael Berthon. Campana completed the race two podium ahead of former Superleague Formula star Craig Dolby and Berthon. 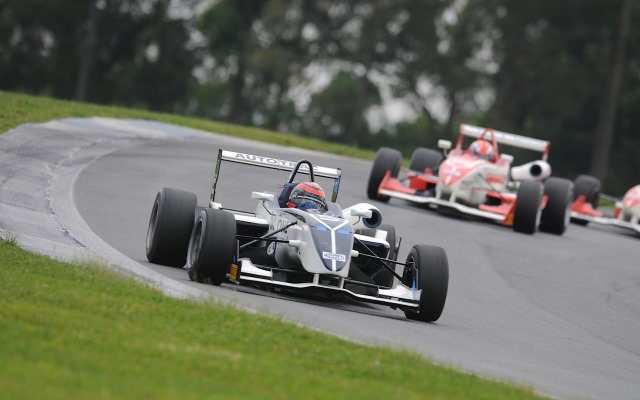 F3 Brazil champions Pedro Piquet and Vitor Baptista continued their winning ways by taking a victory each at the penultimate meeting at Curitiba. Piquet won the opening race by 14 seconds over B-class champion Baptista, who scored his third outright win of the campaign in race two. Piquet retired on lap five.

Arthur Fortunato was third in race one and then second in race two, taking the main class victory in Piquet’s absence from the podium. Victor Miranda – another B-class driver – was third.

Sainz may have won the title and rival Gasly claimed second place and top rookie honours, but Rowland showed what he could do in the final round of the season at Jerez. He couldn’t have come much closer to the win in race one, and may well have got it on a track where overtaking was not so difficult. In race two, he was dominant. If he returns next year, he will be a serious title contender if he can replicate his Jerez form on a consistent basis. 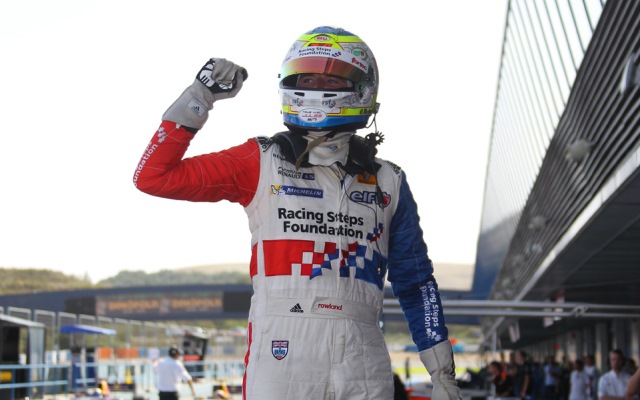