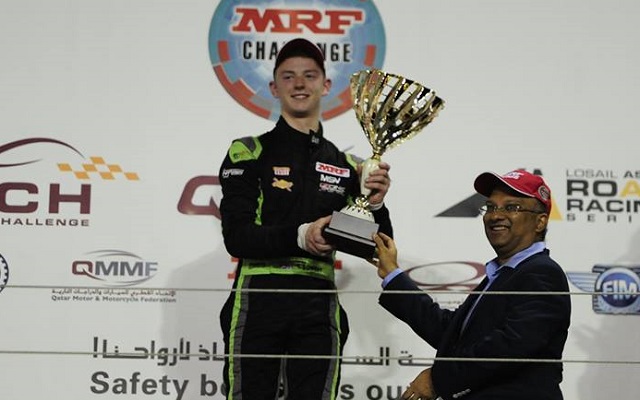 Indian driver Raj Bharath and British driver Toby Sowery won the third and fourth races of the opening round of the 2014-15 MRF Challenge season, held at Losail on Saturday.

In race three, Sowery started from pole, but lost the lead to Bharath off the line, and was then passed by Cullen at turn one. A mistake from Bharath then promoted Cullen to the lead, with South African driver Kyle Mitchell finding a way back past the Indian driver as well.

Bharath and Mitchell exchanged places over the course of the next few laps, and the former finally regained the upper hand on lap eight with a switch-back at turn one.

Bharath pushed Cullen for the lead and found a way past at turn two on lap eleven. Mitchell dived past Cullen on the same lap, and Sowery took advantage as well, moving up to third. Mitchell then closed the gap to Bharath, but the Indian driver held on to take the win.

In the reverse-grid race four, Lauda got a good start from reverse-grid pole, while Reddy made a strong start and moved up to fourth from seventh.

A few laps into the race, Cullen darted past Cardoso by selling him a dummy. The Brazilian ran wide and subsequently lost out to Reddy as well. In an almost carbon copy of that move, Cardoso lost out to Sowery and Bharath a lap later.

Sowery then made a late dive up the inside of Reddy, with Bharath taking advantage once again. On the same lap, Hunt retired after a rather hefty shunt into the wall.

Cullen, who had been shadowing Lauda throughout the race, made his move ?for the lead with three laps left. Sowery followed through, and soon passed Cullen as well.

Lauda quickly began falling back after encountering a mechanical problem. Bharath overtook Cullen for second and then quickly cut down Sowery’s lead, but the Briton held on to take his second win of the weekend. Bharath and Cullen completed the podium.

Cardoso got past Reddy and was forced to defend, successfully holding off a train of cars including Reddy, Nikita Mazepin, Mitchell and Papareli.

Lauda slipped back to ninth, with Young rounding off the top ten.