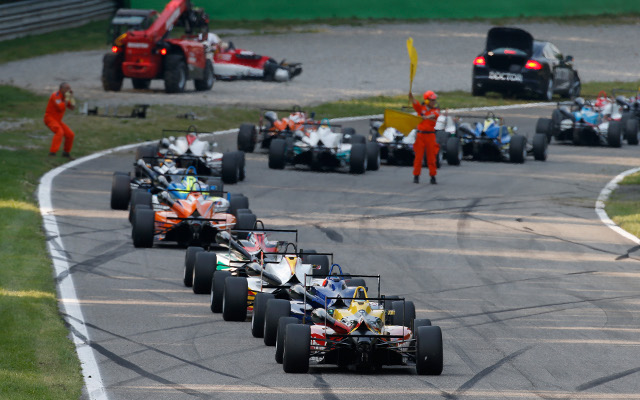 After the FIA F3 European Championship weekend at Monza was eventful for all the wrong reasons, Peter Allen takes a look back at what happened and how a repeat can be avoided.

There was every expectation that the FIA F3 European Championship’s visit to Monza last weekend would be action-packed, but this wasn’t quite what we had in mind.

Underpowered cars on the classic Italian venue are a recipe for plenty of slipstreaming and overtaking, but the F3 weekend had too much contact and incident, and it wasn’t a surprise that officials cut two races short as a result.

Despite the widespread derision of the driving standards on show, most of the incidents weren’t really dangerous (with Lance Stroll’s somersault towards the barriers a notable exception). Mostly, the contact was just clumsy, unnecessary and avoidable.

The European F3 field has been well over 30-cars this year, and that is bound to lead to more opportunities for cars to get too close to each other. But what was strange about Monza is that we hadn’t seen anything like it in the three earlier rounds at Silverstone, Hockenheim and Pau – arguably they had been surprisingly clean.

There’s little room for error in Pau, but races can often be fairly processional with few opportunities to overtake. There were incidents and several safety cars during that weekend, but nothing that would be considered unusual.

There was contact at Silverstone and Hockenheim, but again, nothing had seemed untoward. This may have been because there is more room for error there than at Monza, where incidents are more likely to require a safety car and the frequency of crashes may therefore be more noticeable.

But the incidents were usually of a different nature, too. Before, it was mostly just botched overtaking manoeuvres. At Monza, there was a lot of crowding and moving around when defending, and also a lot of instances of people just tripping over others under braking.

To me, contact stemming from failed overtakes – e.g. ambitious lunges down the inside of a competitor – is understandable and forgiveable, certainly in the junior ranks. That’s not to say that punishments shouldn’t be handed out, but rather that they are inevitable in hard racing among inexperienced drivers.

Mistakes should be penalised and lessons learnt, but it’s not something that needs to be stamped out. We want to see racing, and drivers need to get practice in actually racing rather than just following another car. 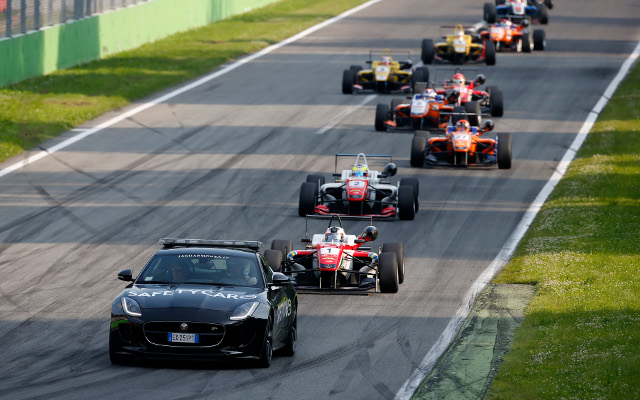 If less than a third of the field scores points in any given race and a large proportion of drivers are used to winning in lesser categories, you’re going to get some do-or-die moves as most have very little to lose. I’ve got no problem with that. But to my eyes, most of the Monza incidents didn’t come into that category.

Dangerous moves when defending are never good to see and always heavily criticised. Monza appears to be particularly susceptible to it because of the long straights – defending in a corner is one thing but you have to get inventive to keep behind a driver who’s picked up a tow.

The problem here perhaps is that a driver can get away with a certain amount of it without consequence. But when things go wrong, you can get the kind of aeroplane crash that befell Stroll.

There were also smaller incidents where drivers retook the racing line too quickly when completing an overtake and ended up shutting the door on the driver behind. This comes down to the use of mirrors and judging distances, but when even Lewis Hamilton has got it wrong, it’s perhaps not a surprise to see youngsters messing up here.

A lot of what happened at Monza – particularly at the first chicane, for instance – was one driver just going into the back of another under braking when they weren’t even trying to overtake. To my untrained eye this is particularly hard to fathom – I can only imagine that it’s down to the low downforce aerodynamics used at Monza making it harder to slow a car down, particularly with the extreme high speeds.

The nature of Monza makes close racing, but other championships have managed in the past to have exciting and clean races. That said, the Italian F4 round at the weekend was also scrappy.

Most on-track incidents boil down to drivers not giving each other enough room, whether they’re overtaking or defending. Monza is certainly tight in places, but the European F3 drivers aren’t exactly used to the wide open ‘Tilkedromes’ either – those whose racing education has come in Europe will be used to narrower circuits.

That said, they don’t seem to have real respect for the track limits. Running over them to gain an advantage is a minor issue, compared to not being afraid to push other drivers over them. In the past when safety was more of a concern, drivers would naturally want to give each other more room. 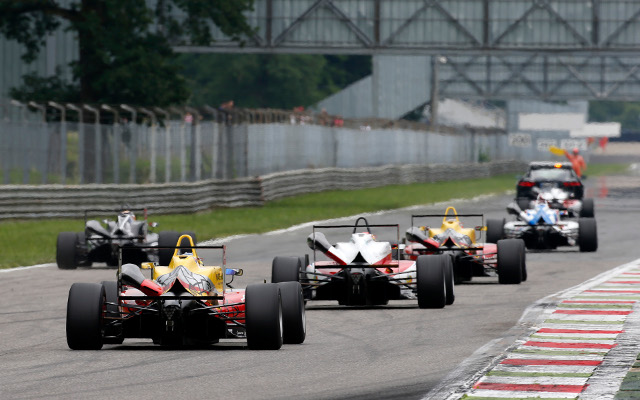 There’s certainly a wide spread of abilities in the European F3 field, and although it’s not uncommon for backmarkers to get into contact, at Monza some of the most talented were among the guilty. And while those fresh out of karting – Callum Ilott and Alessio Lorandi – did get into scrapes (mostly in race one before, encouragingly, learning to keep it clean thereafter), there were more experienced drivers at fault too.

There’s always a hope that poor driving standards are stamped out as racers climb the ranks, but it’s not really fair to blame the categories below F3 for errors from their graduates. If these sorts of incidents didn’t happen under their jurisdiction, they can’t be at fault for misbehaviour at higher levels.

However, with the FIA now having more influence in entry-level championships through its Formula 4 initiative, there’s a great opportunity to educate drivers in order to avoid problems with driving standards emerging further up the ladder. There’s no need to wait for accidents to happen. If drivers don’t have a natural fear of contact, it can surely be taught.

On that note, it’s good to see reports of FIA single-seater president Stefano Domenicali being strict with what happened at the weekend. This is the first real challenge of his tenure, and it’s encouraging to see him taking such a proactive approach.

His F1-trained eyes won’t see junior racing crashes as something that’s just ‘routine’, and he shouldn’t be afraid of being public about the problem because it’s an opportunity to be seen to sort it out.

This situation has reflected badly on a grid full of talented drivers, getting the championship into the mainstream racing conscience for all the wrong reasons.

Hopefully it’s just a one-off and the rest of the season will be – just like the first three rounds – nothing but positive.

Oliver Rowland reclaims points lead with victory in race two, after a fifth in race one. Matthieu Vaxiviere also gets his second win of the year in race one, followed by third in race two. Erstwhile leader Jazeman Jaafar is second in race one and then sixth in race two from the back after being excluded from qualifying. 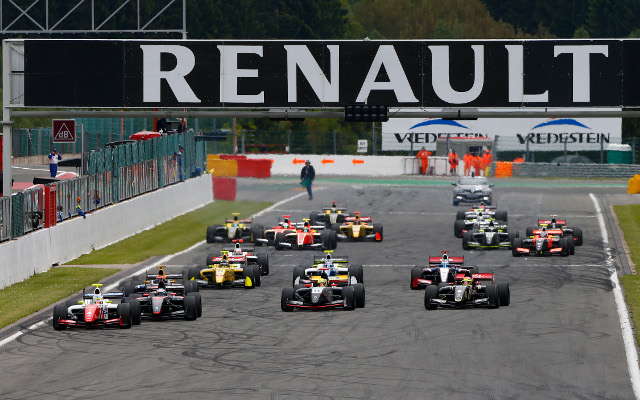 Ukyo Sasahara and Jake Hughes take first Eurocup victories. Hughes is on pole for race one but finishes second to Sasahara, then turns the tables in race two. Anthoine Hubert continues consistency with third and sixth to close gap to Louis Deletraz, who retires from race two after contact with rival Dennis Olsen.

Felix Rosenqvist stays clear of carnage to dominate, but misses out on 25 points as later two races are stopped short after incidents. Mikkel Jensen pushes him close in race one and is third in race two, while Jake Dennis follows Pau wins with three podiums. Antonio Giovinazzi and Charles Leclerc‘s podium streaks end and both fail to finish race two after separate contact.

Chinese Ferrari protege Guan Yu Zhou celebrates 16th birthday with first three single-seater wins, taking championship lead from Prema team-mate Ralf Aron who has to make do with third, sixth and second. Mucke drivers Robert Shwartzman, David Beckmann and Lando Norris take a podium each, as does Joao Vieira after a race one clash with Norris. 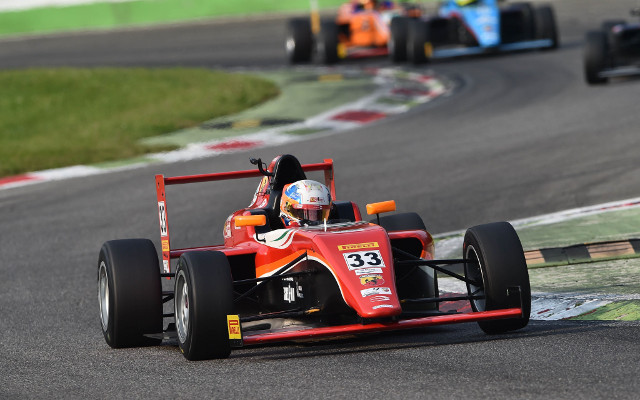 Will Palmer reclaims points lead with two commanding victories. Rodrigo Fonseca is his nearest rival despite finishing 15th in race one after damage. He then charged through to win a wet second race, and was third in race three. Erstwhile championship leader Chris Mealin has a bad weekend with a best finish of seventh.

Championship leader Oliver Soderstrom notches up his third win of 2015 in the second of three races, and finishes second in the other two. Ilmari Korpivaara wins race one, while?Laurents Horr takes the third.