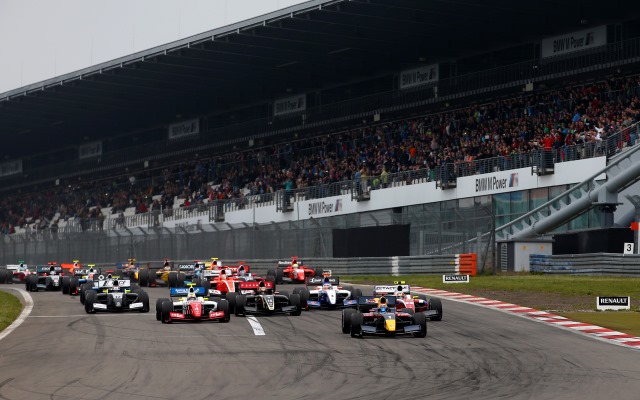 A fifth win of the year was enough for Carlos Sainz to extend his lead in the Formula Renault 3.5 standings despite a first corner crash in race two. The Spaniard snatched Saturday’s pole from the grasp of his Fortec rivals and led the race from start to finish. He was second off the line in race two but?contact was made at turn one with Oliver Rowland on his inside, forcing both into retirement. Rowland had chased Sainz in race one but lost second when his car became stuck in fourth gear with a lap to go, dropping him to fourth place.

Roberto Merhi was the star of the weekend. Fresh from his maiden win in Moscow a fortnight earlier, Merhi inherited second in race one when Rowland slowed, and then led race two from pole position, leaving the chaos behind him. His form has lifted him to second in the standings, 39 points behind Sainz.

His cause was helped by a poor weekend for Pierre Gasly, who started 17th for race one and finished 20th after contact necessitated a front wing change. His Sunday qualifying was even worse – 21st of the 22 drivers – but he steered his way through the chaotic first few corners to take eighth and salvage four points from the weekend.

Sergey Sirotkin has put his run of non-finishes firmly behind him now, following his Moscow win with a third and a fourth in Germany to move up to fifth, within 14 points of third-placed Gasly. Matthieu Vaxiviere had an impressive return from the back injury that kept him out of Spa and Moscow, finishing a close second to Merhi in race two, with Lotus team-mate Marlon Stockinger in third. 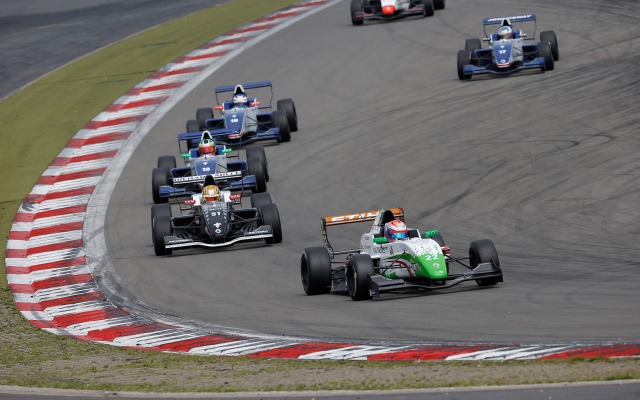 Nyck de Vries extended his points lead in the Eurocup Formula Renault 2.0 with his second win of the season in race one at the Nurburgring. He then finished fourth in race two – third of those eligible for points – to end the weekend with a 30-point lead.

His nearest rival is now Dennis Olsen, who also grabbed his second win of the season in race two after a fourth in race one. Prema team-mate Bruno Bonifacio had his second straight non-scoring weekend but is still third in the standings, 28 points behind Olsen.

Alex Albon started race one from pole position but had to settle for second after being beaten off the line by his old karting rival de Vries. Jack Aitken finally got off the mark with a fine drive to third in wet conditions in race one before adding sixth in race two.

Charles Leclerc followed up his two Alps series wins at Monza with a fine wildcard appearance, finishing fifth and second in the two races. de Vries’ Koiranen team-mates had strong weekends, with Ignazio D’Agosto sixth and third and Nick Cassidy eighth and fifth – although the Kiwi failed to make the most of qualifying third and second. 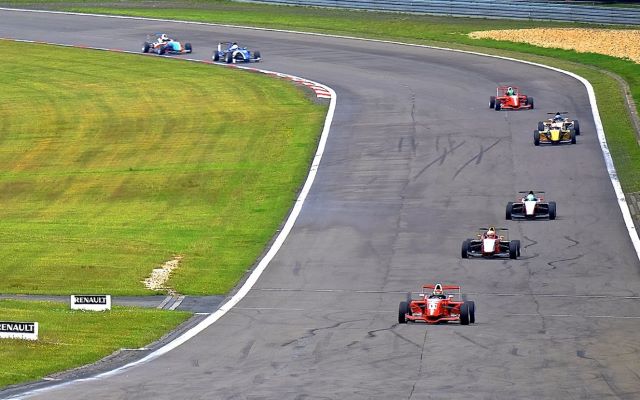 Anton De Pasquale reclaimed the initiative in the Formula Renault 1.6 NEC with two wins at the Nurburgring to extend his points lead.

He and rival Janneau Esmeijer had each claimed a double win at Zandvoort and Spa respectively, and it was Esmeijer who led the opening race at first before being penalised for a jump start.

He was able to recover to fourth, before finishing second to the Australian in race two, dropping to 30 points behind the championship leader. Larry ten Voorde finished second and third in the two races, with Max Defourny third and fourth.

FIA F3 European Championship: Ocon halts Verstappen with a treble of his own 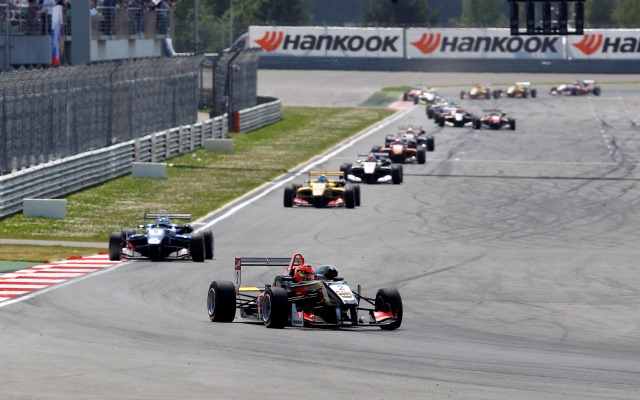 Esteban Ocon ended Max Verstappen‘s run of six wins from six races with his first weekend lockout in Moscow. The Frenchman claimed his sixth, seventh and eighth wins of the season – all from pole position – to extend his championship lead to over 100 points.

Verstappen was third in race one and second in race three, but retired from race two with an alternator problem. Jordan King scored his third consecutive podium in race one to claim second, but after a fifth in race two, his weekend ended with a clash with Lucas Auer (fifth and fourth in the earlier two races).

Antonio Fuoco enjoyed his best weekend since his debut at Silverstone, with sixth in race one followed by second and then third. Tom Blomqvist took a fourth, a third and a seventh. 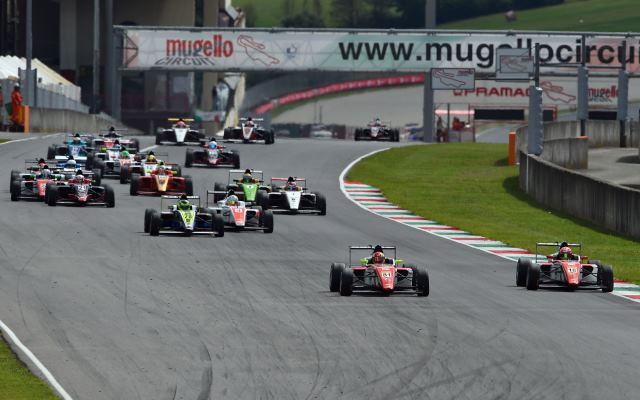 Prema Powerteam dominated the third round of the new Italian F4 series at Mugello, with Brandon Maisano claiming two wins and Lance Stroll extending his championship lead. Former Ferrari junior Maisano scored his first win in the series from pole position in race one, was third in race two and then won the final race despite starting from the back after triggering an aborted start.

Karting graduate Stroll was second to Maisano in race one before winning race two from tenth on the reverse grid. Maisano’s problems saw Stroll lead race three, but he was penalised for forcing Andrea Russo off track and ended up sixth. With Maisano not eligible to fight Stroll in the main championship, the Canadian leads by 61 points over Russo.

Formula Renault 1.6 Nordic: Two wins for Sundahl, one for Fredricsson

Lukas Sundahl and Pontus Fredricsson heaped the pressure on Formula Renault 1.6 Nordic leader Joonas Lappalainen by sharing the wins at round three at Falkenberg. Sundahl won the opening two races from pole before finishing sixth in a safety-car dominated race three.

Fredricsson claimed victory in torrential rain conditions in race three (the weather led to the cancellation of race four), after a fifth and a second in Saturday’s races. Lappalainen failed to finish race one after a first-lap off, before fighting his way up to sixth from the back of the grid in race two and finishing second in race three.

Kevin Aabol finished second and third in the opening two races before retiring from race three. Robert Svensson and Paul Blomqvist were also podium finishers, coming third in races one and three respectively. 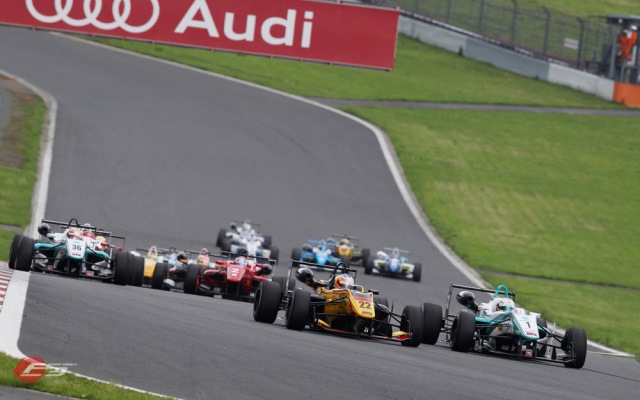 Kenta Yamashita did enough to keep the lead of the Japanese F3 title race despite his two nearest rivals Mitsunori Takaboshi and Nobuharu Matsushita winning at Fuji.

Nissan-backed Takaboshi began race one from pole, and although he lost the lead at the start to Tom’s driver Takamoto Katsuta, he regained the place on lap three and went on to record his second win of the season. Takaboshi would finish fourth in race two, reversing the weekend results of Honda man Matsushita, who led race two from start to finish.

18-year-old Yamashita finished second in both races, keeping him one point ahead of Matsushita in the standings, and ten ahead of Takaboshi. Katsuta ended up sixth and fifth in the two races, leaving last year’s runner-up 26 points off the lead but four ahead of?Daiki Sasaki, who finished both races in third.

The former Euro F3 champion has now firmly put his DTM struggles behind him and reminded the world of what he can do in a single-seater. What’s particularly impressive is the way he’s pushed the Zeta Corse team forward from last year when they didn’t look as strong as this despite having Sainz on board. 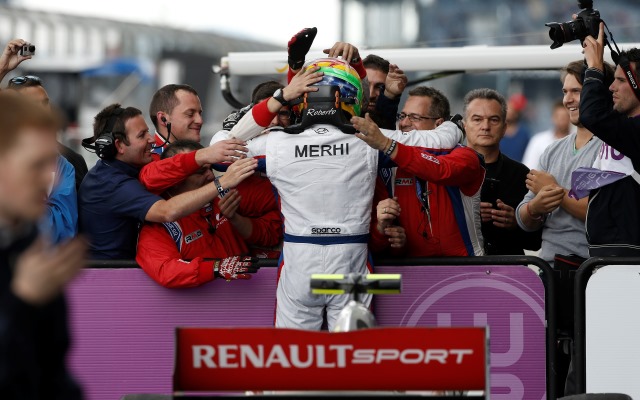