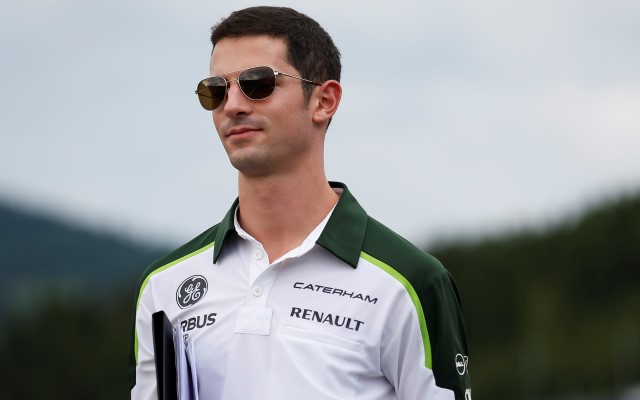 Alexander Rossi has announced that he has parted company with the Caterham Formula 1 and GP2 teams.

American driver Rossi was first picked up by F1 team founder Tony Fernandes in 2011, and has since competed in Formula Renault 3.5 and GP2 with Caterham-branded squads.

He finished ninth in GP2 last year, claiming his maiden victory in Abu Dhabi, but endured a torrid start to the 2014 campaign and sits just 16th in the points.

Rossi has also had a number of testing and free practice outings with the Caterham F1 team, which was sold by Fernandes at the start of this month. Fernandes’ Caterham Group continues to own the GP2 operation, which has yet to announce a replacement for Rossi for this weekend’s races at Hockenheim.

The 22-year-old said he hopes to build upon his existing F1 experience and land a race drive, becoming the first American to compete in F1 since 2007.

“I’m very thankful to everyone at Caterham throughout the time I have worked with the team,” said Rossi. “We had meetings over the past couple months with the previous and new management.

“The decision we took to leave Caterham is the right decision for my career. I have proven my abilities in F1 equipment, in both testing and free practice sessions, and I’m ready for the next step.

“My goal is to be in F1 and add value to the sport. We have a great opportunity to grow the sport in the States and I believe the timing is perfect. I’m also very pleased to see an American F1 entry, Haas Formula with plans to join the F1 grid in 2016.”

The news of Rossi’s split with Caterham doesn’t come as an awful surprise. His relationship with the F1 team came through Fernandes, who first sponsored him in 2011, and the new ownership was unlikely to offer any future for Rossi and more likely to only support well-funded drivers and those with connections to Colin Kolles, like Nathanael Berthon.

Despite his career gaining momentum with strong GP2 form at the end of last year, hopes a race seat at Caterham was becoming less realistic even before the change of ownership, with Fernandes continually needing to bring in drivers with a budget. If there ever was going to be a space for a rookie with no money, Rossi was also going to have to wait behind Robin Frijns, who Fernandes appeared to have taken a liking to.

A more realistic option had been emerging in Haas Formula. As part of their branding as an American F1 team, they will be keen to take on an American driver if there is one who is good enough – and Rossi ticks that box.

Haas has already forged a relationship with Ferrari, and it’s easy to imagine that the Californian with Italian heritage would be a dream fit for an American-entered Ferrari junior team. The potential stumbling block would be if Ferrari wanted to place Raffaele Marciello there – with two rookies potentially seen as a foolish move for a new team.

His struggles in GP2 this year appear to be partly down to the team – which failed to deliver on its pre-season promise – and partly down to Rossi himself, but with the F1 links severed by the change in ownership, continuing with the Caterham GP2 team doesn’t provide much benefit. If he’s eyeing a collaboration with Haas, it doesn’t make sense to continue to further damage his reputation by persevering with a challenging season.

With Haas not arriving on the F1 grid until 2016, it remains to be seen what Rossi will do in the meantime. Will Haas sponsor him to test – or even race – with another team, or does he have something else up his sleeve?