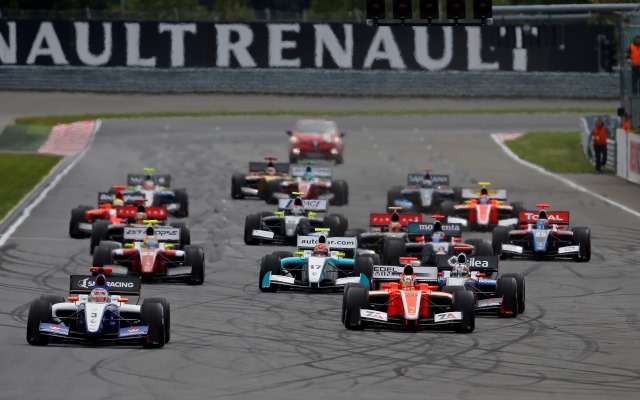 Sergey Sirotkin and Roberto Merhi scored their maiden Formula Renault 3.5 victories in Moscow on a difficult weekend for the leading title contenders. Their wins were far from flukes though, both having qualified on pole position. Local ace Sirotkin’s victory put an end to a run of four straight non-finishes. He ended a strong weekend in race two with a fourth – the same result that Merhi had managed in race one as both drivers made up ground in the championship.

The start of race one saw bizarre circumstances as the top three in the standings – Carlos Sainz, Pierre Gasly and Oliver Rowland – were all left on the grid at the start, triggering a second formation lap. None scored points, with Sainz and Rowland clashing on track and Gasly joining the race a lap down. Gasly would salvage second place in race two, with Rowland fifth and Sainz recovering to sixth after struggling for pace all weekend. The Spaniard still has a 33-point advantage over Gasly in the standings.

The problems for the usual frontrunners allowed three drivers to score their first podiums. Zoel Amberg delivered on his upturn in form this year by following Sirotkin home in race one, with Pietro Fantin in third. Richie Stanaway took third in race two, which was the fourth and last of his planned stand-in appearances with Lotus. 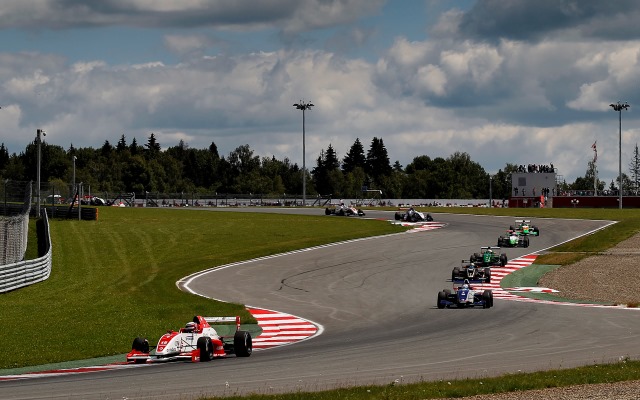 Just as in the senior series, the Eurocup Formula Renault 2.0 saw two first-time winners in Moscow. Aurelien Panis claimed the honours in race one from pole position, leading fellow Frenchman Andrea Pizzitola. In race two it was Kevin Jorg who won, the Swiss driver beating pole-sitter Nyck de Vries off the line.

De Vries came into the weekend tied on points for the championship lead, so retiring from race one due to a first-lap puncture was far from ideal. However, his second place in race two combined with no points at all for nearest rival Bruno Bonifacio means an 18-point lead for the Dutch driver. It also meant he outscored third-placed Dennis Olsen, who took a ninth and fifth from the weekend.

Matt Parry was one of the weekend’s top scorers – the NEC champion putting his poor start to the season behind him to claim third in race one and fourth in race two. 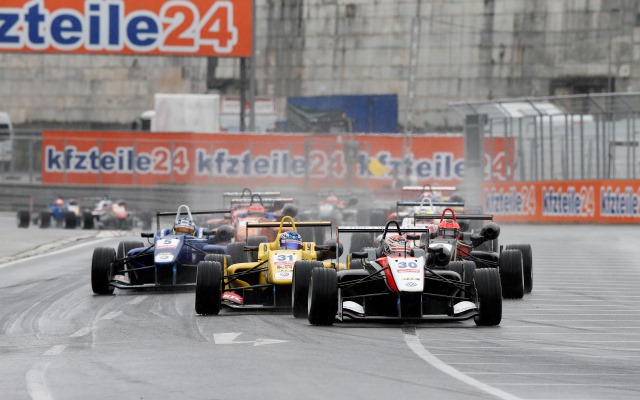 One week on from dominating at Spa-Francorchamps, the incredible Max Verstappen took his second consecutive hat-trick of wins at the FIA F3 European Championship’s visit to the Norisring. The 16-year-old single-seater newcomer passed Felix Rosenqvist and Esteban Ocon to win race one before securing pole for Sunday’s two races, claiming comfortable wins in both.

Verstappen’s rich vein of form has moved him up into second in the championship standings, 74 points behind Ocon. The Frenchman was second to his fellow rookie in the first and third races of the weekend, but failed to score in race two after a move for second on Tom Blomqvist led to race-ending contact for the Briton and a drive-through penalty for Ocon.

Blomqvist had a torrid weekend – a pit stop for a broken front wing restricting him to tenth in race one before two retirements – the second after team-mate Jake Dennis harpooned him out of second at the start. That incident also caught up Mucke drivers Lucas Auer and Rosenqvist. Auer had earlier taken two thirds, and recovered from 18th to eighth in the final race. Rosenqvist had claimed his first pole of the season for race one, but a lack of speed and some incidents restricted him to two sixths and and 11th.

Jordan King recovered from a miserable run of form with second in race two and third in race three, while Santino Ferrucci was one of the stars of the weekend – the American claiming a fifth and a fourth in just his second weekend in the series. 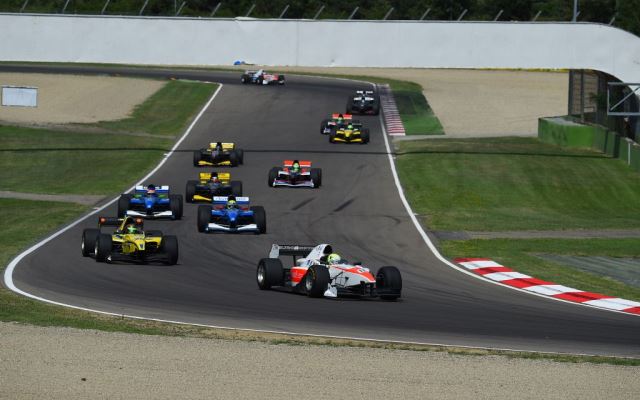 Kimiya Sato returned to Auto GP action at Imola with his points lead still intact after missing the previous round at Monza, and a win in the first race helped the Japanese driver to end the weekend with a significant margin once again. For the first time this season, he would be kept off the podium and made to settle for fourth in race two.

For the third consecutive weekend, Markus Pommer claimed pole position, but the hard work came undone when his car stopped on the first lap. He came back to fifth in race two, but has gone from nine to 36 points in arrears of Sato. Tied with the German now is Kevin Giovesi, who was second to Sato in race one and came through to finish in the same place in race two.

He was unable though to find a way past Michela Cerruti, who claimed her first single-seater win after a fifth in race one. In race one, it was Andrea Roda who completed the podium with his third rostrum from as many weekends, while his new Virtuosi team-mate and outfit returnee Pal Varhaug was third in race two after a fourth in race one. 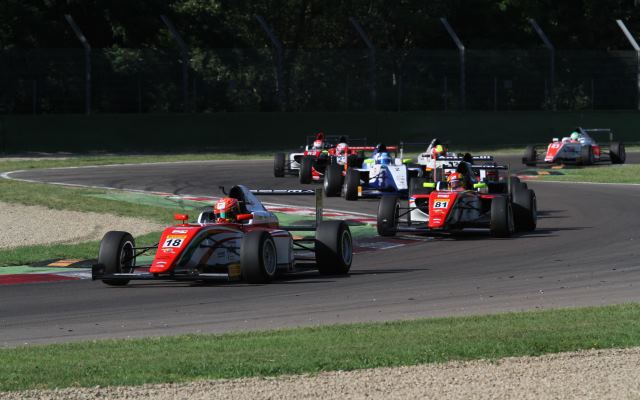 Lance Stroll enjoyed a near-perfect weekend in the second round of the new Italian F4 season to move into a comfortable championship lead. The Ferrari protege led his vastly more experienced Prema team-mate Brandon Maisano home to victory in races one and three.

Andrea Russo had led the way after the opening round at Adria, but he had a tough time at Imola. He was third on the road in race one behind the Prema pair, but was dropped to fourth for not respecting yellow flags. He then held second in race two until a last lap clash with Maisano dropped him to tenth.The incident promoted Stroll to second, the Canadian having worked his way up from tenth on the reverse grid. Maisano, whose age makes him ineligible for the main championship, got to keep third and was instead handed a grid penalty for race three. A retirement in race three leaves Russo 51 points adrift of Stroll, albeit still second in the ranking.

Leonardo Pulcini had a solid weekend with a third and two fifths, while Mattia Drudi took victory in race two after an eighth in race one. A stall put him a lap down in race three. 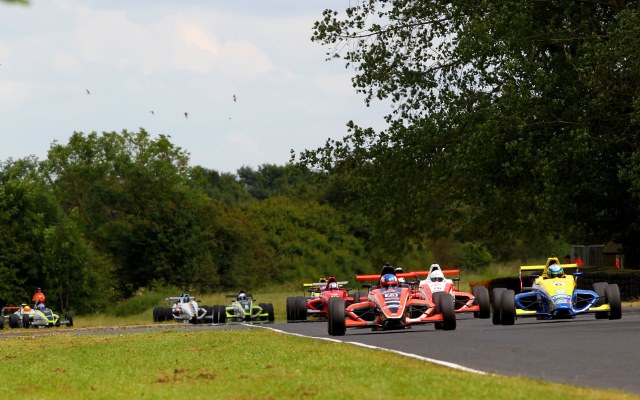 A win and two other podiums at Croft were enough for Harrison Scott to turn a nine-point deficit in the Formula Ford GB standings into a nine-point lead. Scott won the first encounter from pole position, and followed that up with a third place in each of the remaining races.

His cause was aided by a difficult weekend for erstwhile leader Jayde Kruger, whose struggles in the damp qualifying set the tone for his races, with the experienced South African racer only managing a sixth and two fifths.

Ashley Sutton was perhaps the star of the weekend. He had set the pace in Friday testing, but only qualified sixth. Nonetheless, he was able to use his pace to power to the front in each race. He got up to second in race one before a late safety car denied him the chance to attack Scott. He claimed his maiden win in race two from third on the grid, and in race three he again went from sixth to second, finishing right on the tail of winner James Abbott.

Toby Sowery extended his lead in the F3 Cup standings with two wins at Spa, despite added competition for the championship’s trip to Belgium. British F3 regular Peter Li made use of his newer Carlin-run machinery to pip Sowery to pole, but the Lanan Racing ace (who turned 18 on Monday) got past the Chinese driver on the last lap of a soaking wet first race. He once again out-raced Li in a damp race two.

Sowery was joined for the weekend by Struan Moore, who usually drives for Lanan’s BRDC F4 squad. Making his F3 debut, the Jersey racer was a distant third in the first encounter and failed to finish race two.

To avoid picking Verstappen for the second week in a row, we’ll give this honour to his fellow former karting ace Stroll, who had a near-perfect weekend of his own in Italian F4, leading the two feature races from pole position and making superb progress in the reverse grid race. It has moved him into a rather sizeable lead after just two rounds. 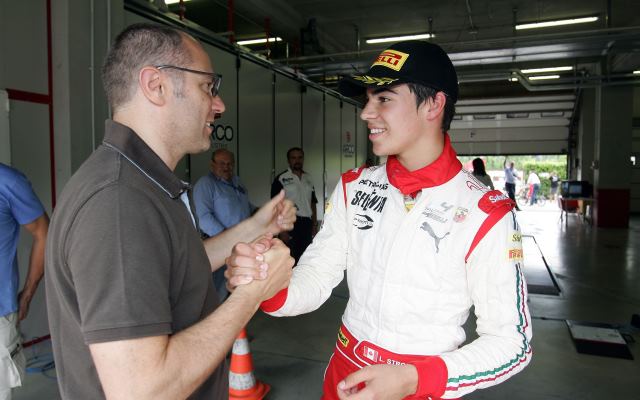