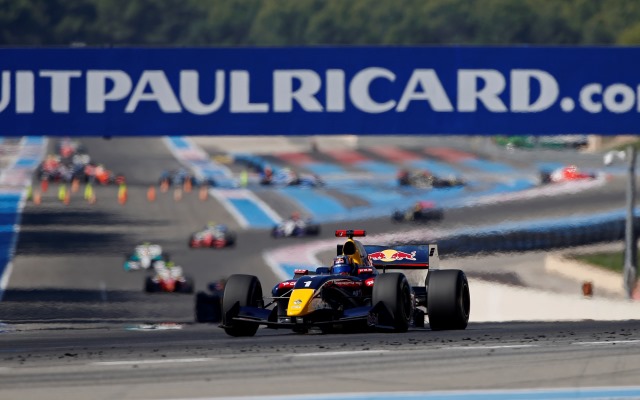 Carlos Sainz is just six points away from sealing the Formula Renault 3.5 title after an impressive return to form with a double victory in the penultimate round at Paul Ricard. Having seen his points lead slashed to just 16 a fortnight earlier in Hungary, Sainz returned to the front in France, winning the first race from pole to flag and dominating the second after getting the best start from second on the grid.

Red Bull stable-mate Pierre Gasly was the closest man to Sainz, putting in another impressive weekend on home soil. On Saturday he started and finished second, and on Sunday he qualified on pole. But losing out to Sainz at the start and struggling to keep up after that meant Gasly would have to settle for his sixth second-place of the year instead of his maiden win.

Sainz’s title rival Roberto Merhi lacked the speed from his Zeta Corse car that took him to wins in the previous three rounds and would instead have to make do with a fifth and fourth, and a slim chance of the title going to Jerez.

Oliver Rowland qualified down in eighth in both races, but strong pace delivered him third place in race two. A super start got him up to the same position in race one, only to be tagged at the first corner and given a puncture, restricting him to 13th. Matthieu Vaxiviere collected his second podium of the year after that contact with Rowland, and was sixth in race two. 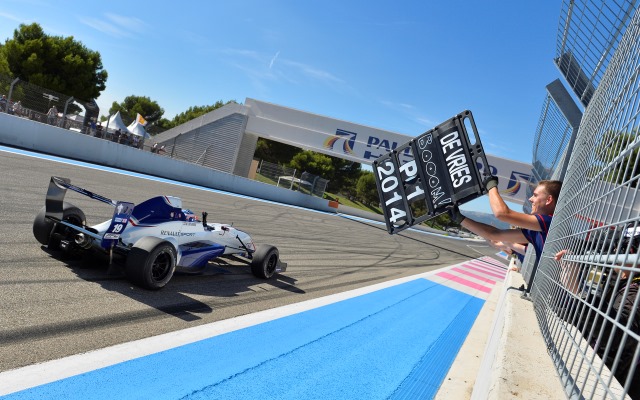 Nyck de Vries proved himself to be a worthy winner of this year’s Eurocup Formula Renault 2.0 title with a dominant double win at Paul Ricard – enough to secure the crown with a round to go. The Dutch driver was untouchable all weekend, winning both races from pole position by comfortable margins, taking the fastest lap each time.

Chief rival Dennis Olsen kept his hopes alive with sixth in race one, but was eliminated from race two in first lap chaos triggered by reckless use of the circuit’s vast run-offs by others. Andrea Pizzitola‘s slim title chances also ended after a fifth and an eighth, but he is just eight points behind Olsen in the fight for the runner-up spot.

Egor Orudzhev enjoyed his best weekend of the season, returning to the podium for the first time since the season opener with second in race one, before adding third in race two. Alex Albon got his third podium of the year with third in race one before finishing back in 13th in race two, while Aurelien Panis was fourth and then second in his two home races.

Sandy Stuvik clinched the Euroformula Open title with his third straight double victory in the category at the penultimate round at Monza. As at Spa three weeks earlier, the Thai driver was dominant from pole position in the two races.

His RP Motorsport team-mate Artur Janosz was a distant second in both races, taking second place in the standings away from karting gradaute Alex Palou, who had a tough non-scoring weekend. Contact caused the Spaniard to roll out of race one at the first chicane, and be classified a lap down in race two due to a puncture.

Yu Kanamaru and Christopher Hoher took third place in the respective races, while Kevin Giovesi was twice fourth on a guest return to the series on home soil. 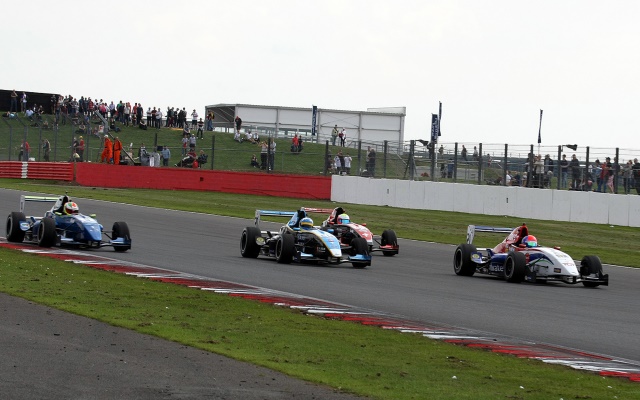 Colin Noble and?Piers Hickin took a win each from the final round of Protyre Formula Renault at Silverstone. Noble claimed pole for the opening race and just held off an attack at the finish line from Hickin to score his first single-seater victory. He then finished a close second to Hickin in race two, as the Scorpio driver clinched his second win of the campaign and secured P2 in the championship.

After wrapping up the title a week beforehand at Croft, Pietro Fittipaldi failed to take a win away from a meeting for the first time this year. He was third on the road in race one, but was demoted to fourth for contact with his MGR team-mate Matteo Ferrer. Fittipaldi led race two from pole, but a sudden loss of momentum saw him shuffled down to fifth within two corners. He would fight back to third, albeit after yet more contact with Ferrer.

A third and a fifth was enough to Ferrer to take third in the final standings ahead of Fortec rookie Alex Gill, who could only manage sixth and ninth from a difficult final weekend.

Formula Ford GB: Kruger draws level with Scott with a round to go 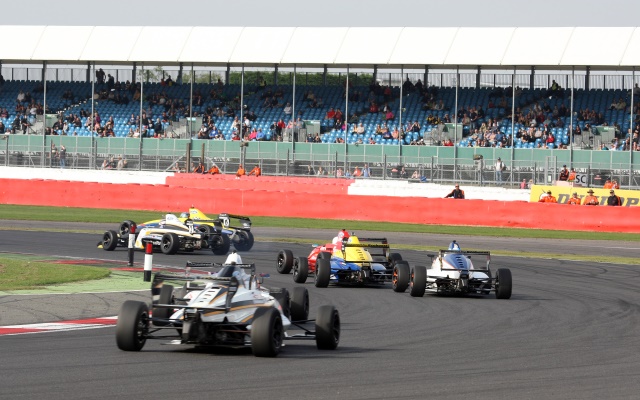 Jayde Kruger and Harrison Scott will go into the final Formula Ford GB round tied for the points lead after the former claimed two more victories at Silverstone and the latter lost points when he spun following contact between the pair.

Kruger scored his 11th and 12th wins of the season from pole position in the weekend’s two main races. Scott was second in those two races to limit the damage, but it was the middle reverse grid race that made the difference. Kruger finished third from sixth on the grid, while Scott would end up down in eighth after the first-lap incident with his rival dropped him to the back of the pack. That cut that gap from 13 to two points, and Scott had to claim fastest lap honours in the final race in order to retain a share of the points lead at the end of the weekend.

Ashley Sutton completed the podium behind the two title rivals in the two main races, and claimed victory in race two, which was also enough for him to wrap up the Scholarship title for rookies. He has now pulled level with Max Marshall for third place in the standings. Marshall failed to finish either of the first two races due to incidents, and finished just behind Sutton in race three to stop himself falling behind.

French F4: Sorensen pulls further away with his second hat-trick 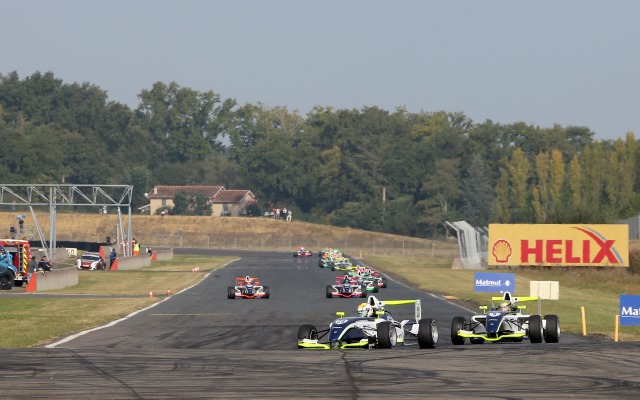 Lasse Sorensen scored his second French F4 treble in round five at Nogaro, extending his points lead from 38 to 69 with two rounds left. Claiming a double pole in qualifying, the Dane then comfortably led the first race from start to finish. In the reverse grid race two, he inherited the win when Max Defourny and Vladimir Atoev collided, putting the former out of the race and earning the latter a penalty. In race three, Sorensen kept Dorian Boccolacci at bay to take the win.

Fourth in the championship, Joseph Mawson dropped back after a poor weekend with a best result of just eighth. Valentin Hasse-Clot was a podium finisher in third in race two, following a fifth in race one and preceding a seventh in race three. 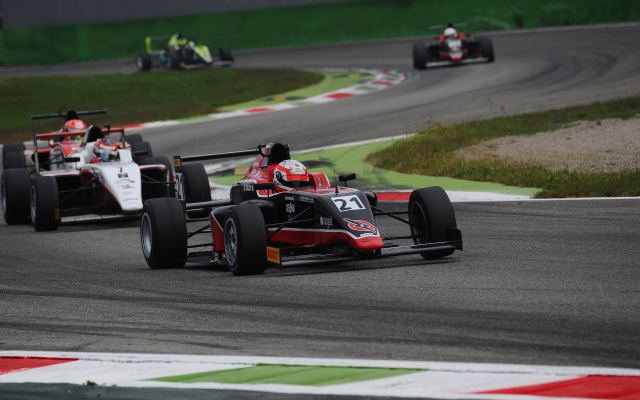 Mattia Drudi immediately responded to doubts about the quality of in Italian F4 in the wake of Lance Stroll‘s cruise to the title by winning all three races at Monza, becoming the category’s first treble winner. He started on pole for race one but was shuffled back to fifth early on before recovering, while in race two he stormed through from tenth on the grid. Race three saw him take the lead at a safety car restart and keep it until the end. He has jumped up from fifth to second in the standings with one round to go.

Stroll led race one but ended up fourth after contact, and was then third in race two. His third race would end at the start when he collected impressive debutant Sennan Fielding. Racing for Euronova, the BRDC F4 regular finished second to Drudi in the first two races before the contact with Stroll ended his weekend early.

Brandon Maisano was another to lead race one before ending up third. He was a first lap retirement in race two after contact, and in race three he started from pole but was made to settle for second by Drudi.

Ortiz took a second, fourth and third from the first three races but was then disqualified from the final race after not serving a drive-through penalty.

Prior to his first two wins, Camarotta was fourth in race one and finished a close second to Baptista in race two before being demoted to third for causing contact. Debutant Agustin Lima made the podium in third and second in the opening two races, while it was Adrian Chiribao who was third in race four.

F&M-entered Drudi put an impressive end to Prema’s dominance in Italian F4 at the marquee round at Monza, coming from behind to win all three races and proving there are drivers to watch out for in the series other than just Lance Stroll. 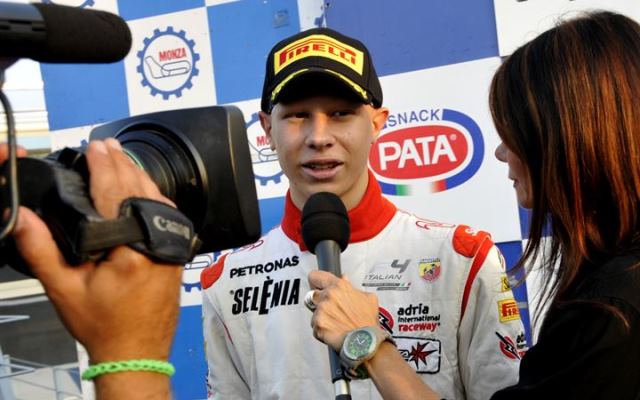