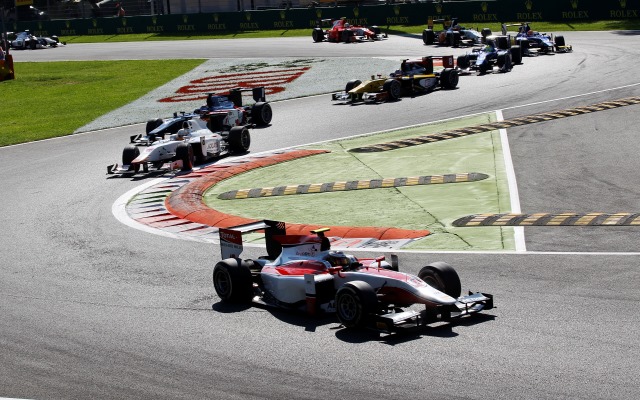 Stoffel Vandoorne claimed his third win in GP2 and his second in a feature race – at Monza. The McLaren junior scored his second straight pole position, and this time held on to take victory. In the sprint race, a stall at the start restricted him to 13th place. Nonetheless, his pole and win were enough to move him closer to the top two in the standings.

Jolyon Palmer recovered from being excluded from qualifying to win the sprint race and extend his lead in the championship. Fourth fastest in qualifying, he didn’t have the required amount of fuel remaining in his car after the session, forcing him to start the feature race from the back. He came through to finish eighth, putting him on reverse grid pole for the sprint and setting up his third win of the campaign, and his first since Monaco.

Rival Felipe Nasr failed to capitalise on Palmer’s problem, gaining just one place from where he started in the feature race and finishing sixth. He would then repeat that result in the sprint race after a poor start from third on the grid. That leaves him 41 points behind Palmer, almost entirely undoing the work he did at Spa to cut the gap from 43 to 32.

Arthur Pic was on the pace all weekend, chasing Vandoorne home in second place in the feature race and following that with seventh in the sprint. Mitch Evans completed the podium on Saturday, but retired on Sunday after contact. Stefano Coletti came from ninth to second in the sprint race, ahead of fellow Monaco man Stephane Richelmi, who had been fourth on Saturday. Andre Negrao has now scored points in the last four races after a pair of fifths at Monza. After his Spa win, Raffaele Marciello had another tough weekend at home, with races affected by incidents.

GP3: Eriksson and Stoneman win, Lynn pulls away from Stanaway 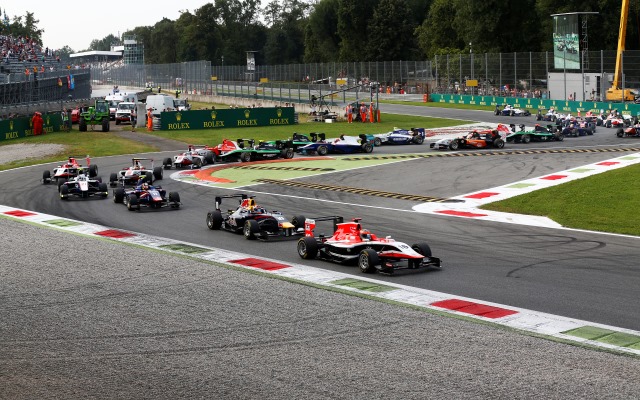 Jimmy Eriksson scored his second GP3 victory in the opening race at Monza from pole position, just as he did at Silverstone. Finsihing eighth in race two, the Swede has moved back up to third in the standings after three low-scoring weekends, but is 58 points off the lead. Dean Stoneman got his third win of the campaign in race two after a great start from fourth on the grid, having finished fifth in race one.

Alex Lynn finished back in sixth in race one after a trip across the inside of the first chicane at the start dropped him back to eighth. In race two he battled with Stoneman for the win before settling for second. He is now 50 points ahead of rival Richie Stanaway, who suffered an off of his own on the first lap of race one, leaving him ninth, and then suffered a an engine failure while on for points in race two.

Dino Zamparelli suffered his fourth second-place finish in the space of six races after failing to beat Eriksson to the win in race one, and finished back in ninth in race two. Marvin Kirchhofer completed the podium after a strong race, and impressively managed to repeat that feat on Sunday. Emil Bernstorff continued his consistent run with two fourths.

Euroformula Open: Stuvik nears title with another double at Spa

Sandy Stuvik pulled away from the opposition in Euroformula Open with his third and fourth wins on the bounce at Spa. The Thai driver was dominant at the classic Belgian venue, winning both races from pole with margins of around 13 seconds. The second year driver is now 45 points clear with two weekends remaining.

His nearest rival Alex Palou was second in race one after fighting for the lead early on, while in race two he finished back in fifth. Artur Janosz finished race one in 14th, a lap down, after an incorrect gamble on wet tyres in mixed conditions, but bounced back to take second in race two.

Dzhon Simonyan scored his first podium with third in race one, while Yu Kanamaru claimed his third top-three finish in race two. European F3 driver Alex Toril took a fourth and a seventh on his return to the series. 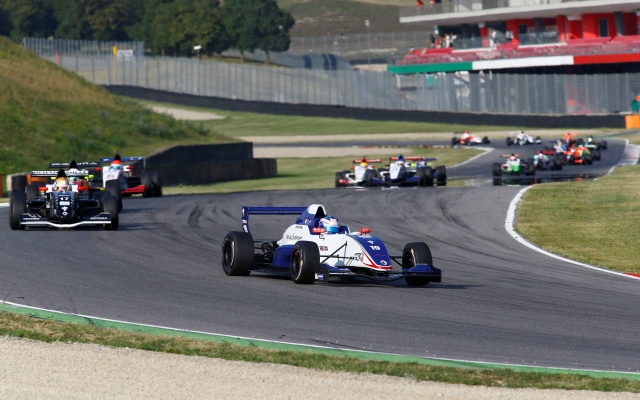 Nyck de Vries wrapped up the Formula Renault 2.0 Alps crown with a double victory at Mugello – his fourth such feat from six rounds. The McLaren protege was never headed during the two races after taking a pair of pole positions, and his victory in the first race was enough to put him out of reach.

After a double of his own at the last round at Monza two months ago, rookie Charles Leclerc was forced to settle for second in both races as he now looks to cement P2 in the standings. His rival for that position Matevos Isaakyan was only seventh in race one, before taking third in race two. There are 19 points between them with one round remaining.

Eurocup regular Bruno Bonifacio took a third and a fourth, while fellow Brazilian Pietro Fittipaldi was fourth in race one, ahead of?George Russell, and then eighth behind the Briton in race two. 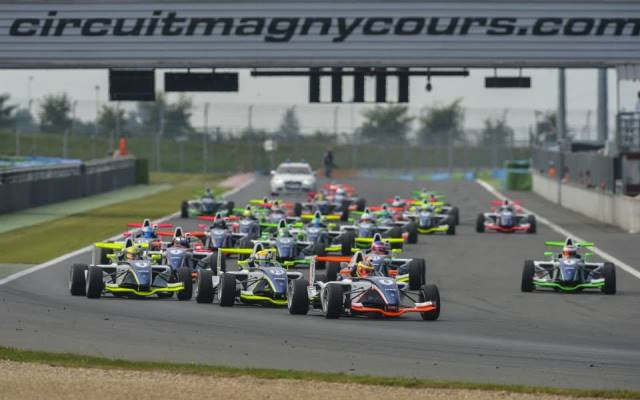 Felix Hirsiger became the fourth driver in as many rounds to win both main races in a French F4 weekend at Magny-Cours. The Anglo-Swiss driver took his maiden single-seater win in the first race from pole keeping Lasse Sorensen at bay, was sixth in the reverse grid second race, and then won race three after a last lap challenge from Joseph Mawson. Hirsiger is up to second in the points, 38 behind Sorensen with three rounds remaining.

After his second place in race one, Sorensen went on to finish eighth in race two and then third in race three. Dorian Boccolacci completed the race one podium, but then retired from race two and finished back in 12th in race two. The Lotus F1 junior is therefore now 52 points off Sorensen and nine ahead of Australian driver Mawson, who progressed from fourth, to third and then second during the weekend. 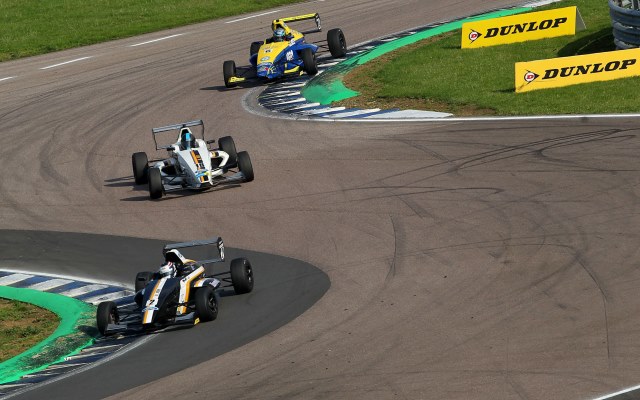 Jayde Kruger scored another two Formula Ford GB wins at Rockingham but actually saw the gap to rival Harrison Scott increase after retiring from race two. A third straight victory in the opening race drew him level on points with Scott, but a fuel pump then took him out of race two and dropped him to 24 points adrift. The race three win cut that gap back down to 17.

Scott continued his recent run of consistency, taking his third, fourth and fifth consecutive third place finishes. Ashley Sutton was second in the opening two races, but then missed the third after overheating his engine. Max Marshall was fourth in race one, took his second win in race two, and then beat Scott to second place in race three.

Ricky Collard continued his recent form with fifth and fourth in the opening two races, but was then forced out of race three with a cockpit fire. Louise Richardson had already passed him early on to take a fine fourth, after a sixth and fifth from the earlier races. 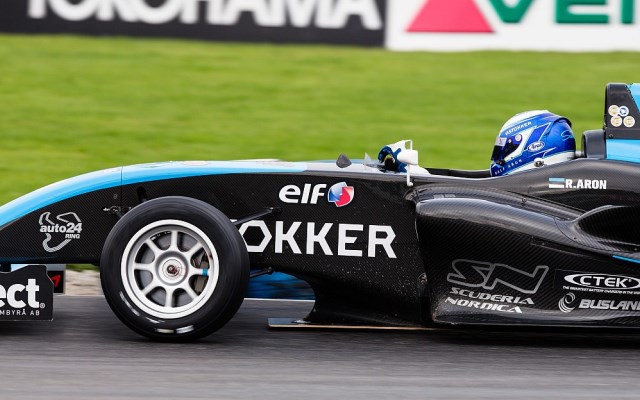 Ralf Aron claimed victory in the two Formula Renault 1.6 Nordic races at Solvalla. The Estonian led race one comfortably after jumping from third to first at the start, while he dominated race two from pole position.

Kevin Aabol took a second and a third from the two races, climbing to second in the standings and closing the gap to leader Joonas Lappalainen to 24 points with one round remaining. Lappalainen was finished back in eighth in race one after serving a drive-through for a jump start, and finished in the same position in race two.

F3 Brazil: Piquet and Baptista secure respective titles with a win each 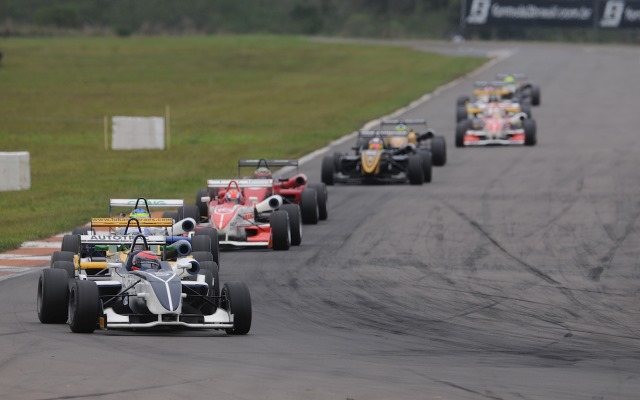 Pedro Piquet wrapped up the F3 Brazil title with two rounds to spare at Velopark. The 16-year-old took his eighth win from 11 races in the opener, and fifth in race two (third in the main class) after a drive-through for not respecting yellow flags was enough for him to secure the crown, as he is 79 points ahead with only 60 available.

His Cesario team-mate Vitor Baptista wrapped up the Light class for older cars with an outright victory in race two, after Renan Guerra slowed with a differential problem late on. For the first time, Baptista failed to win his class in race one, retiring with a battery problem.

In race one, Lukas Moraes and Matheus Leist made the podium behind Piquet – the latter taking the Light class win in Baptista’s absence. Leonardo Souza took third in race two behind Baptista and Guerra.

This wasn’t the first time that Stuvik has won both races in a Euroformula Open round this year, and it’s arguably not a surprise as a driver who finished second in the 2013 standings, but the Thai driver was absolutely dominant at Spa, winning both races by over ten seconds and giving himself a decent margin at the head of the championship with two rounds to go. 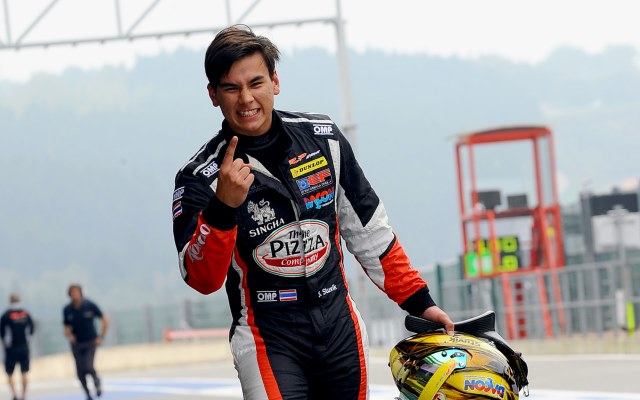