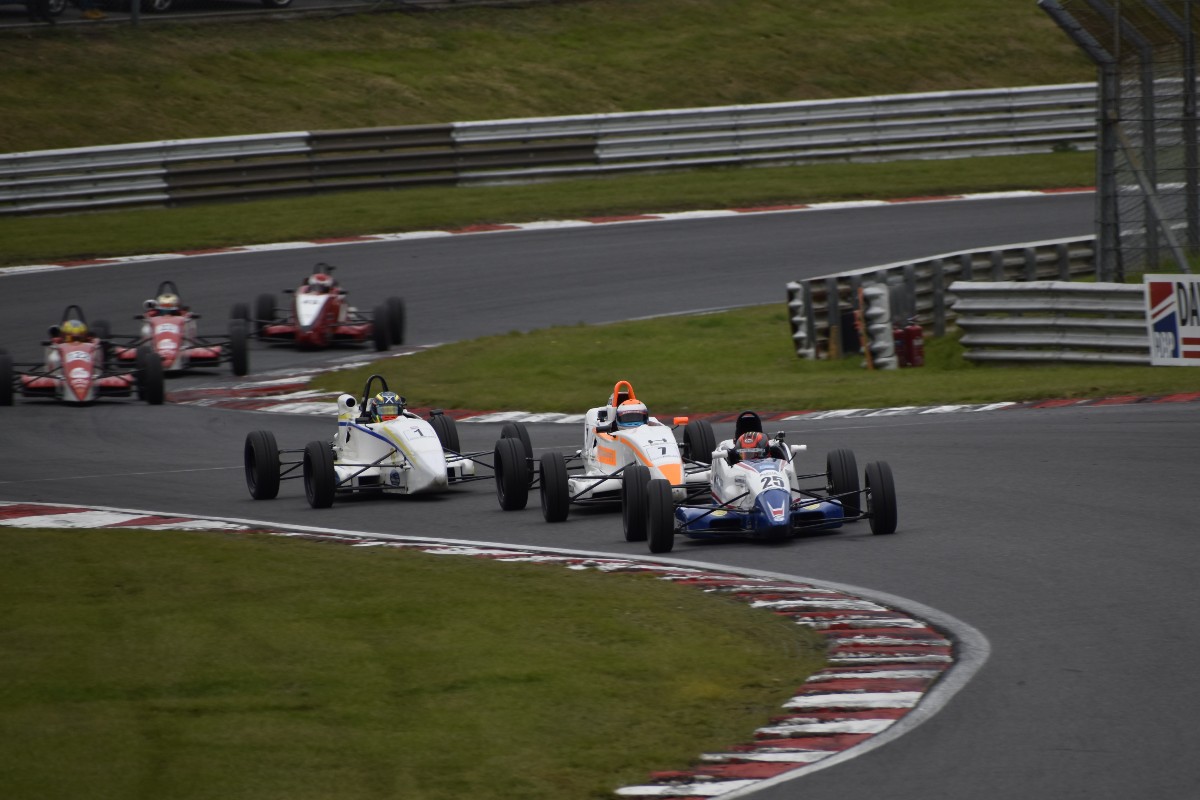 One of the benefits of a late date on the racing calendar in 2020 has been avoiding cancellation. Following a shortened BRSCC National Formula Ford 1600 season, this year’s FFord Festival is more significant than ever

Six weekends, 12 races. That’s all of the competitive action the BRSCC National and Northern Formula Ford 1600 championships and the Scottish FF1600 runners have had this year, and most trophy cabinets are still empty after the two biggest series in Britain were largely dominated by one driver each.

This has added emphasis on having successful runs in the back-to-back end-of-year classics, which begins this weekend with the 49th running of the FFord Festival. And with Formula 2’s street circuit visits gone from 2020 and most of the Formula 3 classics also cancelled, it means the Festival genuinely stands as one of the biggest junior single-seater events of the year.

That begins with the entry list, which currently sits at 53 cars. A near-capacity group of 29 at Brands Hatch are entered in the ‘Pro’ class, occupied by machines that were built in 1993 and onwards. This is where the young drivers are, where the fastest of the Ford ‘Kent’-powered wingless cars are, and where all but certain the overall winner is set to come from.

The 53 will be drawn into three separate groups for qualifying, which sets the grid for the heat races. The best drivers from those progress into two semi-final races, of which the top 24 qualify for the trophy-awarding final race. Drivers who struggled along the way get a Last Chance Race, from which the top six finishers fill the last three rows of the final’s grid.

While a shorter season has meant smaller budgets this year, the prospect of bigger names joining the fray has been stymied by the pandemic in another way – many can’t afford to miss paid work (such as driver coaching) for the pleasure of racing at the Festival.

The big teams have filled their line-ups with less experienced names, but ones that are sure to ring a bell with junior single-seater fans. They will have to get used to the multi-class element of the Festival, a feature that was rolled out into the regular FF1600 season in the UK this year. 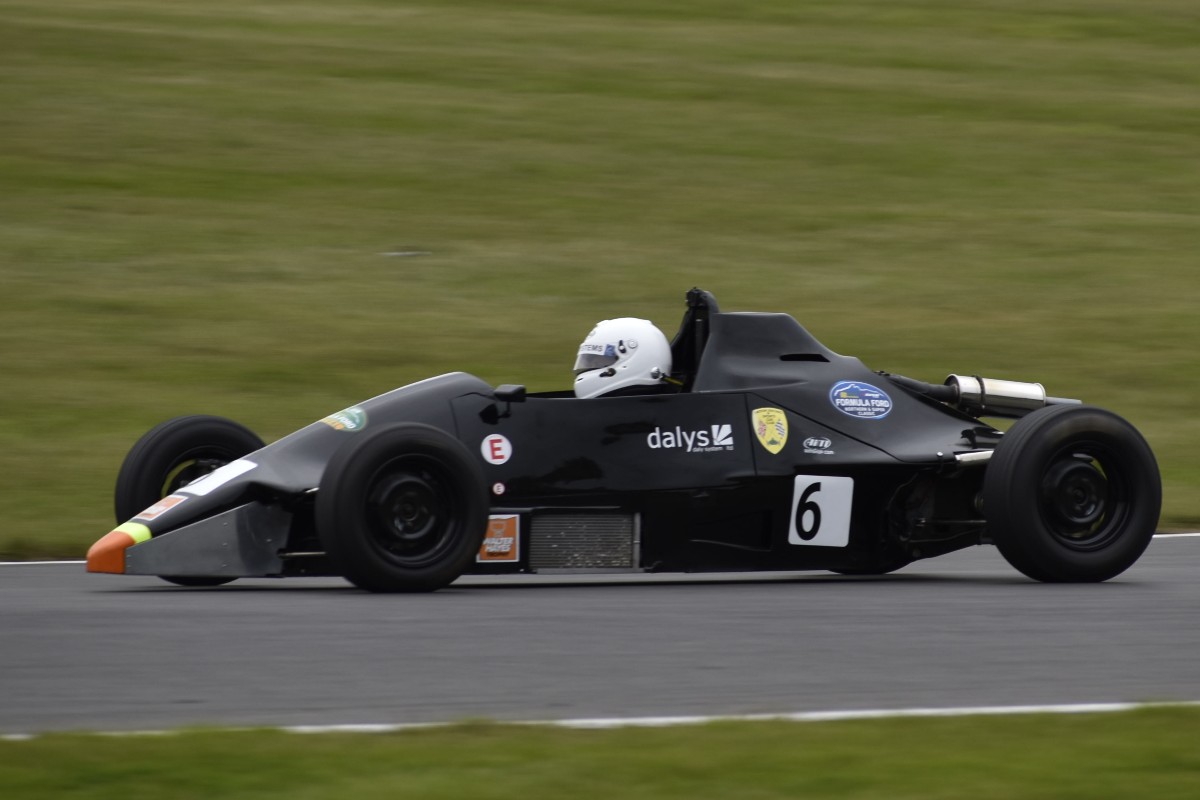 Usually the National and Northern series have run in different races and different calendars, with the ‘Pro’ cars tending to compete in the more prestigious National series and the older cars (and drivers) aiming for easier success in Northern. This year they ended up with one shared three-round calendar, and sharing a grid for all of their races.

“One of the reasons for combining the grid has been the amount of track time available,” BRSCC chairman Peter Daly, who also happened to win the BRSCC Northern FF1600 title this year in his Van Diemen RF88, explained to Formula Scout.

“Because race circuits are at a premium at the moment; TOCA [British Formula 4’s paddock] has got nine rounds, British GT [BRDC British F3’s paddock] have got six pounds, there’s lots and lots of racing going on. So when we looked at last year’s totals for the National and for Northern, we really only had one option [for 2020], and that was to combine them.

“It’s not unusual, because if you look at the big events at the end of the year like the Festival and the Walter Hayes Trophy, it’s great racing and everybody has a class to race in.”

Daly made his comments during the National FF1600 season opener at Oulton Park in July, where 34 drivers turned up to race. If that kind of number is ready to commit to 2021 already, then grids may be split again.

“We have got quite a few entries already [for round two at Anglesey], because I think there were a few disappointed people who couldn’t enter here. So they are now putting their money down to get their grid spot,” he added.

A lack of communication from the Welsh government resulted in the visit to Anglesey being cancelled and replaced by a one-day round on Silverstone’s International layout, which wasn’t the best return for the series as its coastal trip was set to include two days of racing, one of official testing and a second test day focused at non-license holders and karters. 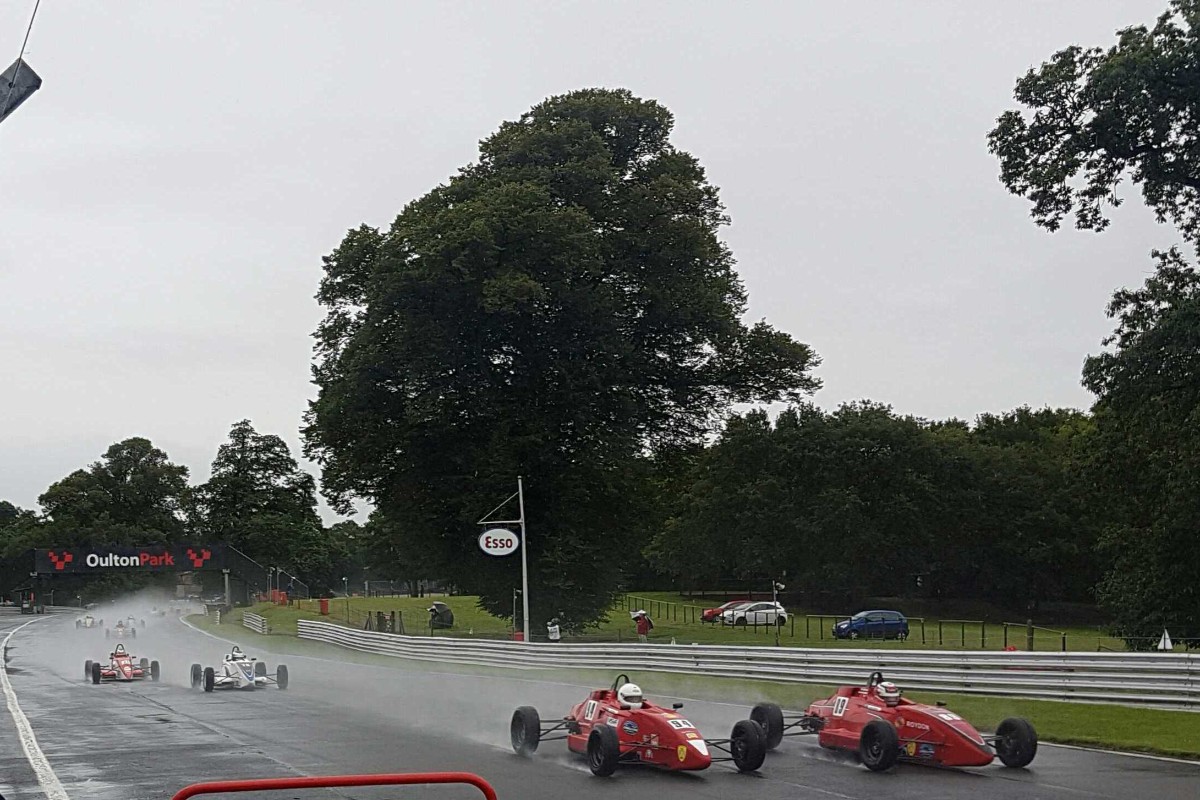 As in British F4, it’s fairly easy for a young driver looking for experience to find a test or race berth in the National FF1600 paddock, with plenty of well-established teams that are used to developing cars as well as drivers. Oldfield Motorsport ran Josh Smith to the 2017 BRSCC Northern title and 2018 Festival victory, after which McLaren signed him as a GT junior.

Those success stories, as well as the packed grids, have a knock-on effect and is why the Festival’s busy entry list is usually a reliable indicator of what to expect in FF1600 the year after.

“It’s contagious,” Daly explained. “You get a full grid, you get a lot of people wanting to be there. If you have a half-empty grid, people won’t come. It’s really, really strange. Even though there’s more space.”

This year Oldfield is running two drivers in Van Diemen JL13s at the Festival. One is French FF1600 sensation and Ford Fiesta racer Milan De Laet, and the other is Goofy Pirro. Name sounds familiar? He’s the son of five-time Le Mans 24 Hours winner Emanuele Pirro and is also Gabriel Bortoleto’s engineer at Prema in Italian F4.

Prema colleague and ex-Oldfield driver Pedro Matos, who engineered Frederik Vesti in the FIA F3 Championship this year, helped land Pirro the seat and the experience of 1988 Festival winner and 1995 International Formula 3000 champion Vincenzo Sospiri has been called upon to help the rookie – who has several years of historic sportscars experience but has had most of his single-seater mileage come in private F4 tests in Italy during 2020.

The Van Diemen marque was one of junior single-seaters’ largest in the second half of the 20th century and into the 2000s, but there’s been no new cars bearing its name in some years and it’s the short-wheelbase Medinas that are mechnically a spiritual successor in FF1600. They have a more aerodynamic shape than the older cars, and they accelerate better out of corners as well as going faster down the straights, but the slipstream effect is weaker due to the smaller frontal area and resultant disturbance of air. If it rains though, it’s these cars that will likely be the best to have. 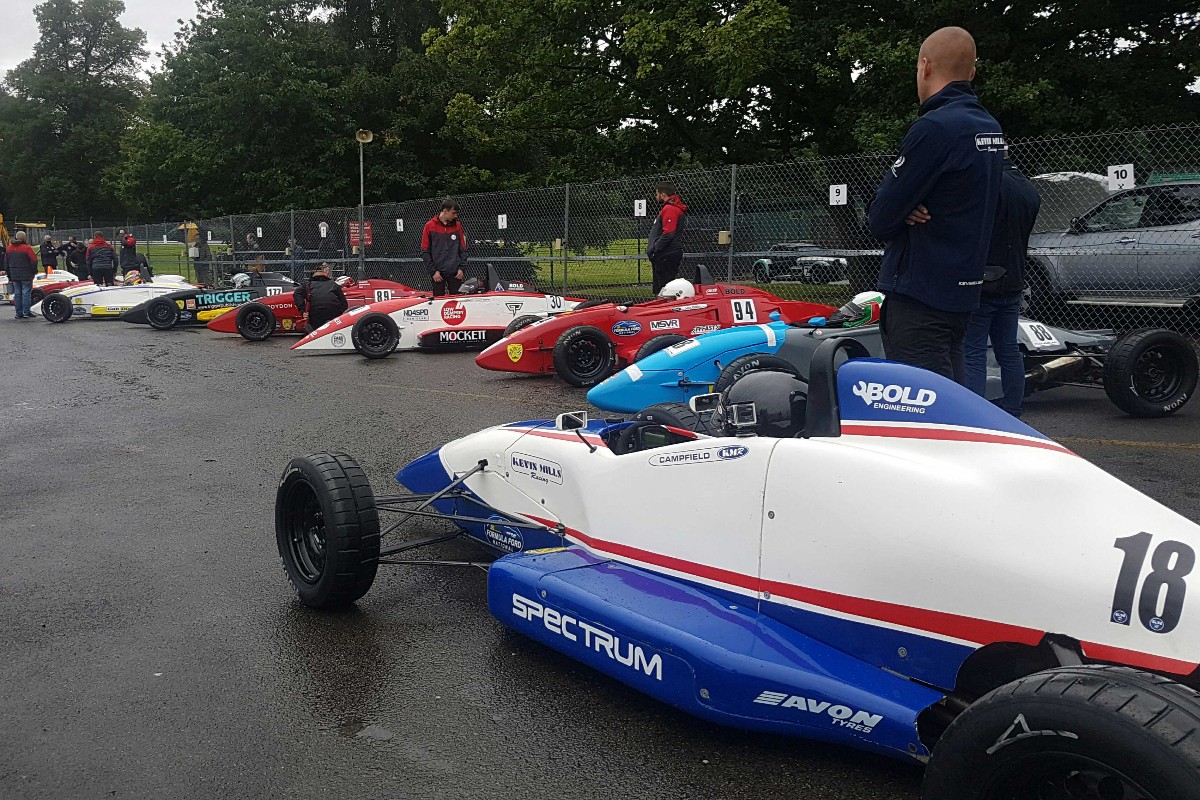 Last year’s winning team Cliff Dempsey Racing has changed ownership and become Low Dempsey Racing, but it still uses the continuously developed Ray chassis. It’s fielding this year’s Team USA Scholarship winners Bryce Aron and Jackson Lee, who have both already starred in this level of machinery, defending Festival winner Jonathan Browne – who has been Champion of Brands in FF1600 five times in a row in 2020 – and Lee’s American racing rival Maxwell Esterson.

Also using Rays is Springbridge Motorsport, one half of Souley Motorsport’s line-up and Scotland’s top team Graham Brunton Racing, which is without 2019 signing and Williams Formula 1 junior Jamie Chadwick but does have female representation in its line-up in Logan Hannah. The bulging Oulton entry list, Anglesey’s cancellation, and capped paddock sizes at other club meetings as a COVID-19 preucation meant Scottish FF1600 racer Hannah didn’t make her planned move into UK-wide competition this year, but last week she claimed her first domestic success by winning the David Leslie Trophy.

Souley is also running a Medina for Ollie White, who came very close to winning the Festival in 2018.

It was Kevin Mills Racing and its fleet of Spectrums that won the National championship this year though, and the dominant Neil Maclennan will be sure to better his best Festival finish of third. He’s joined by regular team-mate Reece Lycett, as well as rising historic racing star Horatio Fitz-Simon and Megan Gilkes – the winner of the famous finish to W Series’ non-championship Assen race last year and a successful driver at the FF1600 level. 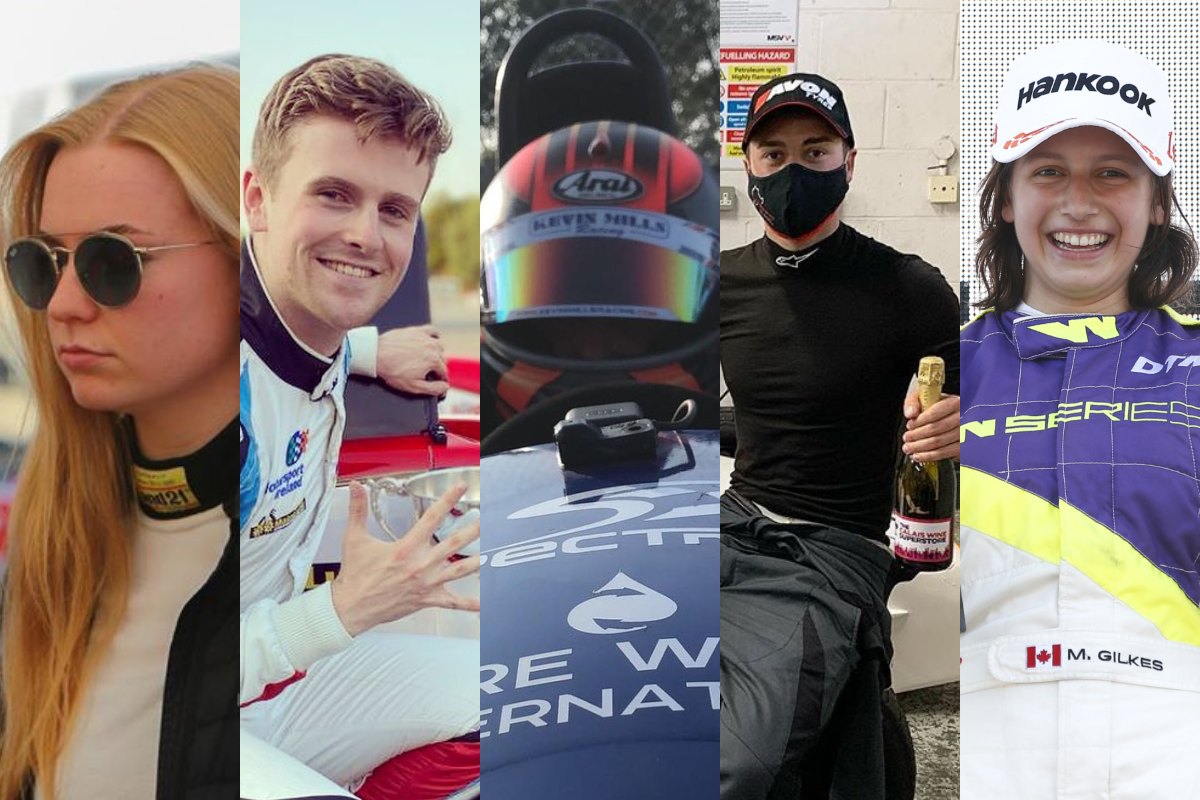 A late addition to the KMR fold is the team’s 2019 Walter Hayes Trophy winner Jordan Dempsey, who (like many of the Festival entants) will also race in the Silverstone event next week. Dempsey won the 2018 Chinese F4 title and raced in Asian F3 last year, but its switch to a winter format denied him a return to the series.

He was then aiming for a move to Formula Regional Americas, but the pandemic put pay to that and besides one British F3 test he has not been in a racing car since his dominant WHT win.

Highlights of the older cars being entered include Daly’s RF88 and Ayrton Senna’s old rival Rick Morris in a Royale RP29.

All of the Festival action will be livestreamed on Facebook and YouTube by the BRSCC, and you can read about every race of the weekend too on FormulaScout.com

You can find out more about FFord racing and this weekend’s Festival on the latest episode of our podcast, which can be found on Breaker, Google Podcasts, Overcast, Pocket Casts, RadioPublic, Castbox, Apple Podcasts and Spotify.