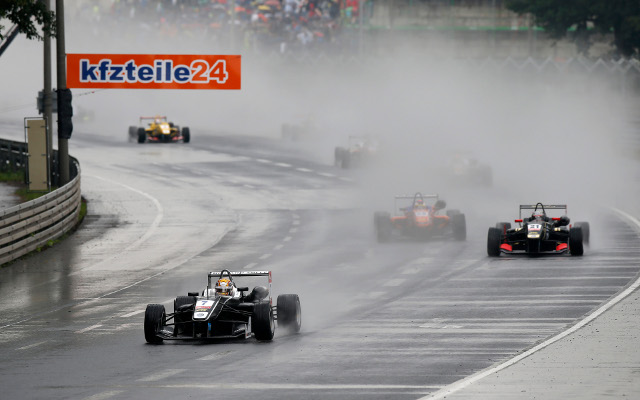 Peter Allen argues that despite more incidents, the European F3 weekend at Norisring showed off the positives of the series including a quality crop of rookies, led by Charles Leclerc.

The FIA F3 European Championship has generated only negative headlines in recent weeks, with good reason after some shambolic driving at Spa and Monza.

The unfortunate thing is that in situations like that, anything related to the series gets tainted with that same brush of negativity. In particular, all of the drivers suffer in terms of their reputations – exactly the thing they are trying to build in a positive way with their performances in each race.

But to me, there were plenty of positive things happening at the Norisring last weekend to remind us what is so great about the European F3 series in 2015.

Yes, there was still plenty of contact, but most of it was completely normal for the Nuremberg street circuit. Almost without exception, every incident took place at the tight first hairpin at the end of the long pit straight – an F3 accident blackspot if ever there was one.

At Spa and Monza, there were instances of reckless, dangerous and brainless driving. Most of what happened at the Norisring was either a bit overambitious or a tad clumsy, and all to be perfectly expected.

And most of it came in the dry conditions of races two and three, and not in the absolutely treacherous rain of race one.

Aside from the incident that triggered the race-ending safety car involving a lapped car that had just exited the pits, the race was almost entirely clean. That was ever so impressive given there had been no wet running prior to that.

More impressive than anybody was the man at the front of that race, Charles Leclerc.

It almost got missed in the Spa fracas that the 17-year-old rookie took the championship lead there. And after the hype surrounding Esteban Ocon and Max Verstappen last year, it would be easy to now dismiss what he’s doing nothing in 2015 as nothing out of the ordinary.

But when you stop and think about it, Leclerc is every bit as impressive as last year’s stars, if not more. 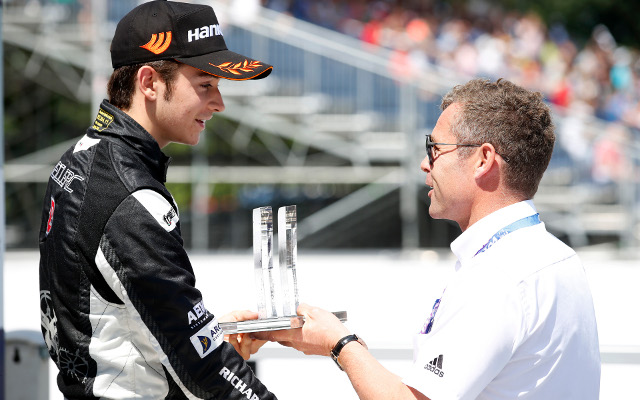 Like Ocon, he’s leading the championship, but he’s doing so with quite a bit less Formula Renault 2.0 experience than his fellow Francophone and with the Van Amersfoort squad (in Verstappen’s very car with the same engineer, Rik Vernooij) rather than with the Prema Powerteam that has delivered the last four drivers’ titles.

At the Norisring he was the pace-setter from the get-go, and was opening up a dominant lead in that wet first race when it was nullified by the safety car.

OK, so he didn’t win the other two races, but he was still impressive and in the mix at the front end. He brilliantly balanced bold and risky overtaking attempts with staying out of trouble, and in race two that was particularly notable in the context of his three more experienced title rivals all failing to score.

Admittedly, there was definitely luck involved in that – Antonio Giovinazzi and Jake Dennis were both blameless when taken out of race two, and?Felix Rosenqvist had more than his fair share of points stolen away through no fault of his own at Monza and Spa.

But ultimately, Leclerc has managed to pair front-running pace with consistency and reliability, and that’s nothing but impressive for a driver of such little experience. From 18 races, he’s had just two races wrecked by incident, and luck or no luck, it’s commendable and given him a 42.5-point buffer over the best of his three experienced and fast rivals.

Norisring really highlighted the class in the rookie crop of 2015.

Leclerc’s fellow Formula Renault 2.0 graduate Alex Albon was quick all weekend, and will be disappointed that his first two poles yielded only second and third place finishes.

After struggling to initially build upon his debut win at Silverstone, George Russell found his qualifying speed again and led race two and finished a fine second to Giovinazzi in race three.

Maximilian Gunther qualified on the front row for the first time for race one, but it was from 12th in race two when the German picked up his maiden win after brilliantly staying out of trouble and taking opportunities when they came. 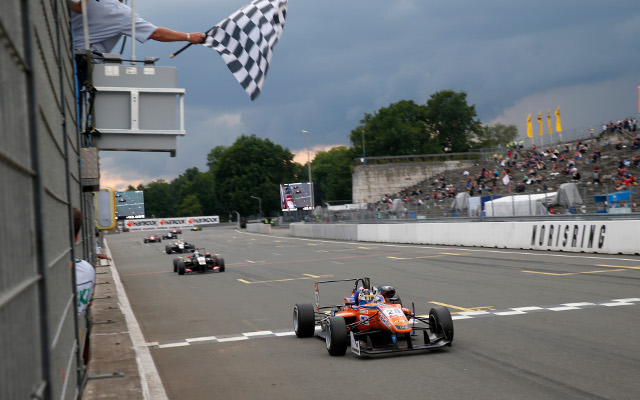 His Mucke team-mate and old ADAC Formel Masters rival Mikkel Jensen bounced back from the disappointment of Spa when two potential wins went begging to take another pair of top six finishes.

And Lance Stroll also moved on from the events of Spa a week earlier to match his best-yet finish of fourth.

That quintet drivers may be trailing Leclerc and his title rivals, but occupy the next five places in the standings and are all proving their abilities in their rookie campaigns.

With Leclerc, they locked out the top six in race two as the experienced drivers hit trouble. To achieve that at the Norisring is quite something – not only is it a challenging and unique track, but no other junior series races there, so every series rookie was also a Norisring debutant.

For Dorian Boccolacci, Callum Ilott and Alessio Lorandi, the sheer size of the jump up to F3 (from the centrally-run French F4 for Boccolacci, the other two straight from karts) has made their seasons difficult, but they all went well in Nuremberg, showing a glimpse of the form that made them such hot property in karting.

Capitalising on the improved Signature pace demonstrated by Albon, Bococlacci followed up his first points finish at Spa by taking three top-eight finishes. Ilott and Lorandi stayed out of trouble better than many and both took points – Ilott a seventh in race three and Lorandi was twice ninth.

For others, it was a more difficult weekend. But in a series of over 30 drivers where the vast majority have shown some form of promise in the past but only 10 can score points, that’s always going to be the case.

That situation also promotes a higher number of racing incidents, as do the vast majority of the circuits on the calendar – they’re not wide open Tilkedromes, but classic and challenging venues. There’s no excuse for dangerous driving, but close racing can sometimes get just a bit too close.

It takes something remarkable for junior series to make mainstream headlines. But after the negative events of Monza and Spa, the Norisring reminded us of the positives of the remarkable European F3 field of 2015. And of one remarkable talent in particular.

Charles Leclerc extends his points lead, leading a soaking wet first race from start to finish and then taking safe third and fourth place finishes from the other races. After a second in the first race, Antonio Giovinazzi is taken out of race two but bounces back to win the finale. Felix Rosenqvist only scores once, Jake Dennis doesn’t score at all. Maximilian Gunther takes a maiden win in a manic race two while Alex Albon and George Russell impress with podiums.

Ralf Aron takes the Italian F4 lead back off Prema team-mate Guan Yu Zhou with two wins at Imola, with Zhou settling for second in both races. Both fail to score in race two though, Zhou after a crash and Aron due to a penalty for overtaking under yellow flags. David Beckmann fights back from qualifying exclusion to win reverse grid race. 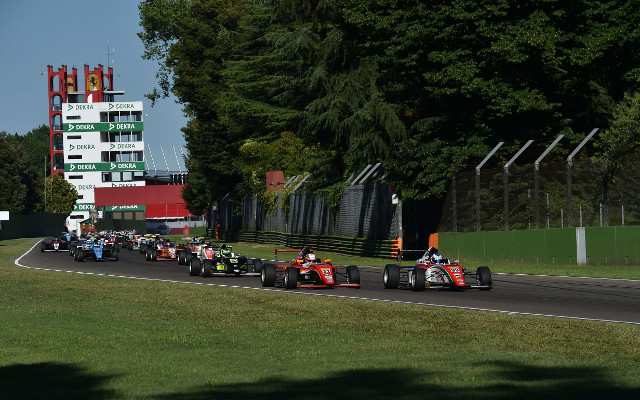 Mitsunori Takaboshi ends TOM’s victory streak by winning both races. With second place on both occasions, Kenta Yamashita takes the championship lead away from team-mate Nick Cassidy, who is twice denied a podium finish by Nissan ace Lucas Ordonez.

On the weekend his brother Nelson wins the inaugural Formula E title, 16-year-old Pedro Piquet (fresh from an appearance in the Porsche Supercup in Austria) dominates both races. That moves the defending champion into the points lead after a mixed start, as erstwhile leaders?Matheus Iorio and Rodrigo Baptista have poor weekends.

Martin Moggia extends his points advantage with his fifth win from as many rounds in race two, after beaten to the win in race one by Emiliano Marino who takes second in standings from Marcelo Ciarrocchi, who fails to finish race one and is disqualified from race two