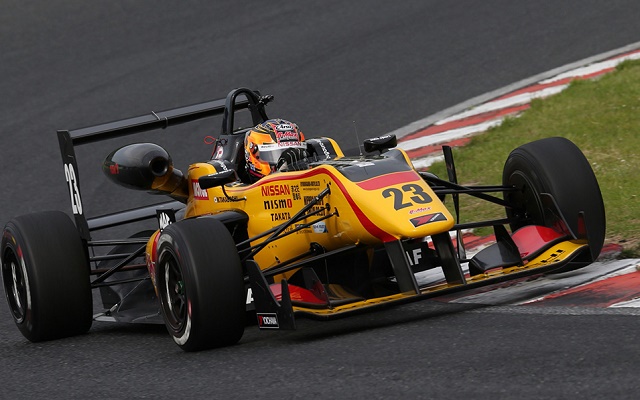 TOM’S protege Kenta Yamashita held pole for both races, but lost out to Takaboshi off the line on Saturday and Sunday.

In race one, the B-Max driver simply got a better launch from the front row, easily taking the inside line into T1 and emerging as the leader.

It proved to be the deciding moment for the 18-lap event, as Yamashita remained around a second behind Takaboshi for the remainder of the race but could not retake the spot.

Elsewhere, then-points leader Nick Cassidy started third, only to be forced on the outside of the first corner by Lucas Ordonez, the Spaniard making his return after skipping Fuji.

The second race saw the same front row of Yamashita and Takaboshi and, this time around, the former tried to aggressively chop across his rival off the line.

It did not help, as Takaboshi managed to squeeze alongside and edge ahead, while Cassidy maintained a close third.

The safety car for Alex Yang – the round’s only retirement – was out shortly thereafter, but the restart did not bring a lead change as Takaboshi stayed out front, going on to win the race, with Yamashita taking another runner-up finish.

Cassidy, however, allowed Ordonez alongside through T1, and the Spaniard robbed him of the final podium spot again by holding the inside line through the subsequent corner.

Fukuzumi was fifth this time around, while Keishi Ishikawa picked up the final point, finishing sixth for the fourth consecutive time.

Despite failing to convert either pole into a win, Yamashita has taken the lead in the standings, leading Cassidy by four points and a charging Takaboshi by five with six races to go.

In the National Class, Ai Miura ended Ryo Ogawa‘s six-race winning streak on Saturday, only for him to respond with a win on Sunday.