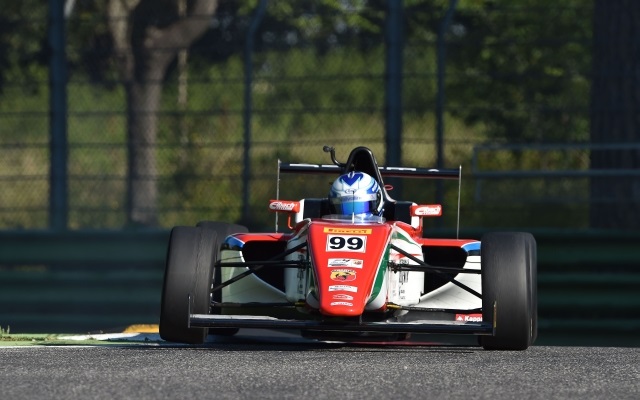 Ralf Aron converted his second pole position into his second Italian F4?win of the weekend in the final race at Imola.

Similarly to race one, Aron kept the lead off the line and confidently maintained that position despite two safety car stints.

The first interruption came when fellow Prema driver Giuliano Raucci was turned around by Arlind Hoti at turn one, both of their cars stranded in the gravel.

Then, during the final minutes, Wiktoria Pankiewicz suffered a violent crash after going side-by-side and making contact with an opponent of hers.

While Pankiewicz’s car was being cleared, the clock ticked down and the race was called to see Aron collecting his fourth victory of the season.

Joao Vieira rounded out the podium, inheriting third after Mauricio Baiz received a drive-through penalty for a jump start for the second time this weekend.

Marcos Siebert ended up fourth, followed by Mike Ortmann, who recorded his best finish in fifth and became the top Mucke driver as his teammates hit trouble.

Lucas Mauron secured sixth just ahead of Robert Shwartzman, who had a slow start to the race, dropping as low as ninth during the first couple of laps.

His teammate?David Beckmann had an even worse beginning to the race, as the race two winner stalled from third on the grid. However, he managed to fight his way up to ninth and was putting some serious pressure on Bar Baruch when the safety car visited the track for the second time.

Diego Bertonelli completed the top ten, the Italian finishing all three races of the weekend within the top ten.