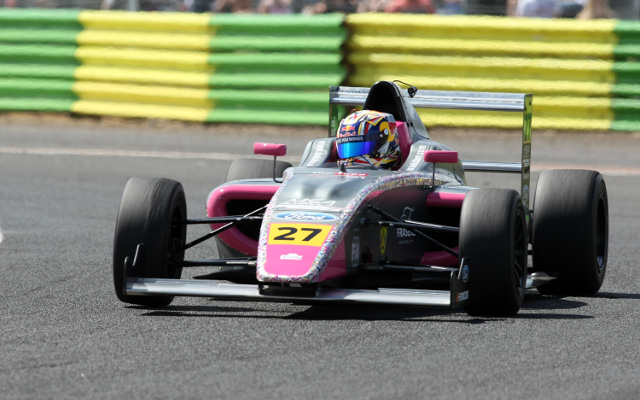 Dan Ticktum claimed the spoils in the final MSA Formula race at Croft after race-long pressure from Lando Norris and Ricky Collard.

Ticktum had taken the chequered flag first in the opening race of the weekend but was later excluded for final-corner contact with Norris.

Norris started from pole again in the final race but Ticktum alongside him got the better launch to pull fully ahead before they got to the first corner.

Fortec’s Ticktum was pursed by Carlin racer Norris and Arden’s championship leader Collard from there onwards, with the trio running absolutely nose-to-tail for the most part.

Norris was unable to find a way past Ticktum however, and would lose out to his title rival Collard with three minutes remaining after a slow exit from the hairpin.

Ticktum had a half-second lead over Collard going onto the final lap and held on to score his third win of the season and his first since round two at Donington in April.

Norris finished a second behind the winner in third, and is now 21 points behind Collard with Ticktum a further 10 back.

Sennan Fielding passed the other Carlin cars of Colton Herta and Petru Florescu to take fourth.

The move on Herta was completed when the American ran wide onto the grass and dropped down to eighth, behind Louise Richardson and Matheus Leist. Later contact with Leist at the first corner sent Herta into a spin and down to 15th.

After taking his maiden victory in race two, Josh Smith retired to the pits at the end of the first lap.