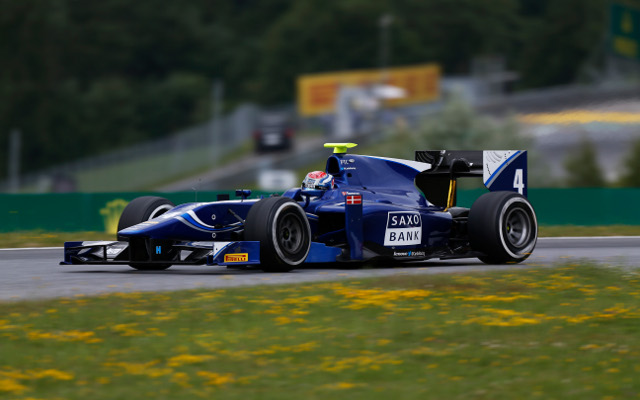 Marco Sorensen has left the Carlin GP2 team ahead of this weekend’s round at Silverstone, and has been replaced by Johnny Cecotto.

The Dane had failed to score a point in the first eight races of the season, with his best finish being just 16th place in the last race at Spielberg.

A three-time race-winner in Formula Renault 3.5 in 2012-13, Sorensen made his GP2 debut a year ago at Silverstone for the MP Motorsport team.

He scored points in nine of the 14 races he did for the team, scored its maiden victory in the Sochi sprint race and finished 11th in the final standings despite missing the first four rounds.

However, a move to Carlin to replace Formula 1-bound Felipe Nasr has not worked out, and Sorensen will now focus on his programme in the World Endurance Championship with Aston Martin.

“I am dropping GP2 for now,” Sorensen told Danish publication?BT. “For me it is the best bet right now to get some good results in GT racing. But this does not mean that I have abandoned my dream of driving Formula 1, it’s just a little pause.

“It’s all gone a bit fast, but I’m fine with my decision. It is the best for everyone, and I am interested in creating some results at Aston Martin and move on from there.

“It is no secret that the results have not been anything to brag about. Therefore, it will help my career more to do well in the WEC series.”

Team boss Trevor Carlin said: ?We?re very sad to see Marco leave us at such an early stage before he had the chance to fulfil his potential with us, but we fully understand the decision to now focus on his GT racing activities.

“He?s a very likeable guy and we wish him lots of the luck for the future.”

Sorensen is replaced alongside Julian Leal by another South American series veteran Cecotto, who did two rounds for Hilmer earlier this season.

?At such short notice we wanted a driver who could jump in and be confident in the current GP2 car and was capable of delivering a good result,” said Carlin.