Home Featured Weekend Review: Dennis shows what he can do in Pau
FeaturesRoundups 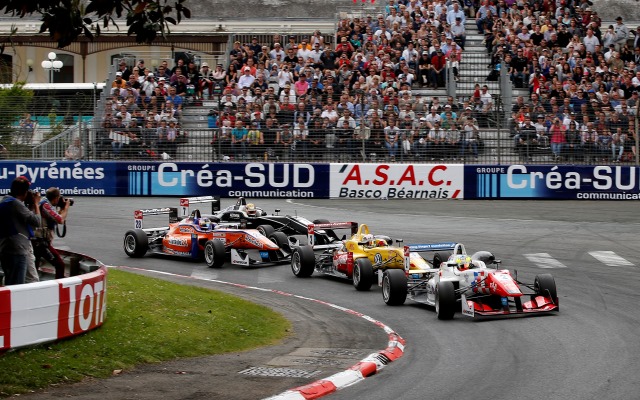 Peter Allen looks back at the Pau Grand Prix weekend, where Jake Dennis found winning ways to prove he could yet be a factor in the European F3 title race.

Prior to last weekend’s Pau Grand Prix meeting, one could have been forgiven for seeing the FIA F3 European Championship title fight as a three-horse race already.

Antonio Giovinazzi, Charles Leclerc and Felix Rosenqvist had completely dominated the podium at Hockenheim, and in the standings, third-placed Rosenqvist had exactly twice as many points (92) as the driver in fourth.

That driver was Jake Dennis. Ninth in his rookie season last year, a move from Carlin to Prema for his second campaign put Dennis among the pre-season favourites for 2015. He struggled to live up to this status in the opening two rounds, however.

He was twice on the podium at Silverstone but was taken out of race two at the penultimate corner as he scrapped for minor points after stalling at the start. At Hockenheim, he was fourth in race one but was forced to start from the pitlane in race two after more problems with a new starting system, and a lowly eighth in race three after a poor qualifying.

Pau was always going to be a big weekend for Dennis to get his season kick-started. After all, at the beginning of last year he had low-key weekends at Silverstone and Hockenheim but then enjoyed his best event of the season in Pau – helped by experience from the prior year’s Formula Renault 2.0 race there – and triggered an improved run of form during the summer. If he was going to perform anywhere this season, it would be here.

This year, qualifying had held him back in the opening rounds versus his rivals, but Pau presented a great chance to put that right thanks to the grouping system (based on car numbers) which had put the championship top three in the first group and Dennis in the second. He fully maximised that opportunity to claim a hat-trick of poles.

In the races, there was no repeat of problems with the start system as Dennis got good enough launches on every occasion to retain the lead off the line. In race one he absorbed race-long pressure from Giovinazzi and Leclerc to take his maiden F3 victory, while in race two he survived a total of four safety car restarts – one after a red flag – to double up.

He looked comfortable in race three and seemed to be heading to Pau Grand Prix glory, but damaged suspension caused him to drop back as Giovinazzi stole victory.

Had he completed the treble, Dennis would have climbed to third in the standings ahead of Prema team-mate Rosenqvist (who could only manage a best finish of fifth during the weekend). As it is, he’s 14 points behind and further off the lead than he was before the weekend, but he’s proven he can be a factor in the title race.

More importantly than the points haul at this early stage of the season, Dennis has shown he has what it takes to lead the pack. This might have been just one weekend, but if he can repeat it elsewhere, he can be a championship contender. 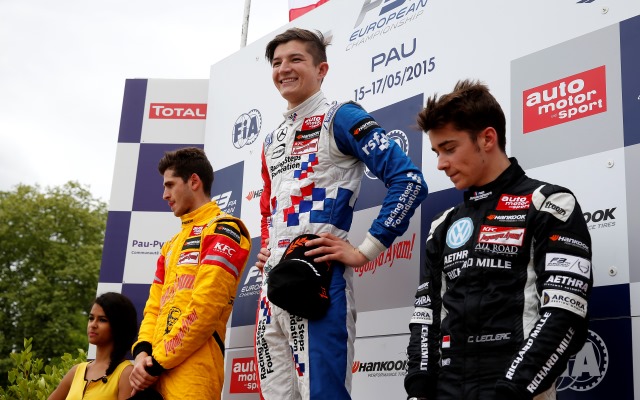 Despite leading all but the last few laps of the entire Pau weekend, that non-score in the final race means that Dennis was out-scored by Giovinazzi over the course of the weekend, 50 points to 58. The Italian has continued his remarkable early-season consistency, and extended his 100 per cent podium record to nine races.

We knew from the second half of last season that Giovinazzi could be quick on his day, but he came into the season having not yet proven his consistency. If anything, any doubts around him now can only be about outright pace, as he’s yet to start on pole position yet this season.

Still, even though his Pau Grand Prix triumph was only the second win from his run of nine podiums, he’s proven adept at getting the most out of races. Indeed, at the weekend he moved forward from his grid position in each race.

It’s says something about Leclerc’s form as a rookie that three more podiums in Pau could be considered to be a “quite disappointing” return from his weekend’s efforts.

Having won in his first race weekends at both Silverstone and Hockenheim, expectation was that he could do the same in Pau, where he finished second in FR2.0 last year.

The pace was good in practice and qualifying but the grouping was weighted against him and prevented him from taking pole. But at the same time, he spurned his front row starts with poor getaways, and struggled to overtake in the races.

He needed some good fortune to make the podium in the final race but in doing so extended his rostrum streak to eight and keeps him well in touch with Giovinazzi. And his pace is such that he’s made the front row six times, more than anyone else.

Rosenqvist had been unbeaten in qualifying heading to Pau and won the main race there last year, but the F3 veteran made a mess of both of Friday’s sessions and after failing to progress into the points in race one, did a decent recovery job to take fifth and sixth in the remaining two. With Giovinazzi and Leclerc looking so strong, there won’t be room for the Swede to have many more weekends like this if he wants to live up to his title favourite status.

Back to the rookies, and Maximilian Gunther proved his Hockenheim pace was about more than just local knowledge as the ADAC Formel Masters produced a repeat hat-trick of P3 grid positions on his first visit to Pau. The grouping was favourable, but he was the nearest challenger to Dennis each time.

In the races, he couldn’t keep pace with the cars ahead of him and broke his string of top-five finishes in race when the late defence of a move from Giovinazzi sent him into the barriers, but he finally turned his starting position into a podium finish in race three when he was rewarded for keeping Leclerc behind with a P2 in the Grand Prix. 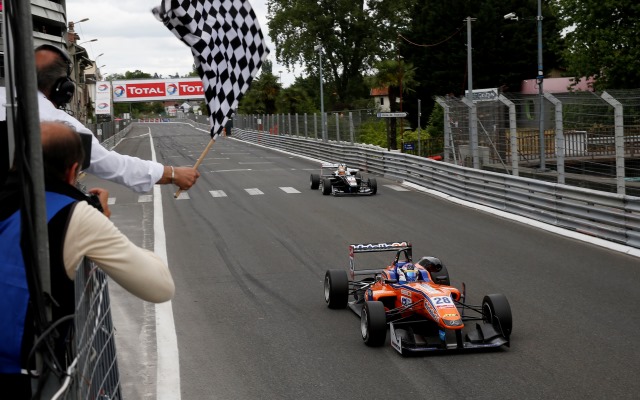 Leclerc’s Van Amersfoort team-mates and fellow youngsters Arjun Maini and Alessio Lorandi hadn’t troubled the scoreboard in the opening two weekends but came on strong in Pau, first topping practice sessions and then qualifying well. Maini turned that into a fourth and a fifth after some clean races while Lorandi belied his inexperience to take a sixth and a seventh.

Jake Dennis takes his first two F3 wins after locking out all pole position for all three races. He’s on course for a treble and victory in the Pau Grand Prix until a damaged wishbone slows him, handing the win to Antonio Giovinazzi. The championship leader and rival Charles Leclerc continue their podium streaks and?Maximilian Gunther finally gets his first, but Felix Rosenqvist struggles.

Anthoine Hubert dominates in Pau, winning both races from pole. His status as a guest driver means Matevos Isaakyan and Jake Hughes take top points for P2 finishes, and eighth and sixth still equals good points for leader Jack Aitken, keeping him ahead of Koiranen team-mates Stefan Riener and Hughes. FR3.5 racer and Pau expert Matthieu Vaxiviere gets a podium. 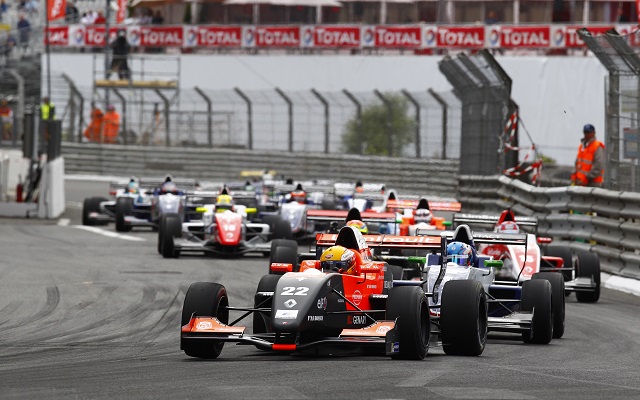 The first ever SMP F4 event sees Formula Ford graduate Aleksanteri Huovinen win the opening two races on home soil. Fellow Finn Niko Kari wins the third race on the road but is penalised for an infringement at the start, handing victory to Nikita Troitskiy. Double pole-sitter Vladimir Atoev is second in the standings after a third, second and fourth.

Martin Moggia takes the standings lead with another win and second place, while erstwhile leader Emiliano Marino is third in race one but then only seventh in race two. Marcelo Ciarrochi matches Moggia’s results to remain in contention.