Nick Yelloly and Robin Frijns win the first races of the eagerly awaited Formula Renault 3.5 season, the latter leading the championship after his first weekend in the series…

Nick Yelloly had impressed with his pace upon arriving in FR3.5 at the back end of 2011, after a tough time in GP3. Few had expected him to be amongst the title contenders this year though with a number of well-known and highly-rated names on the grid. He qualified on the front row on Saturday morning and got the jump at the start on Arthur Pic, who had also surprised with his speed as he topped both Friday practice sessions and then took pole position.

Behind them it was a chaotic start to the season. Richie Stanaway stalled and was collected by Giovanni Venturini, while at Turn 1 Alexander Rossi ran into Walter Grubmuller and Kevin Korjus. All that necessesitated a safety car, with Yelloly leading Carlos Huertas, Jules Bianchi and Pic.

After the restart, Pic was taken out of fourth place by Jake Rosenzweig, promoting Kevin Magnussen who had qualified way down in 19th place.

Bianchi eventually got by Huertas and set off after Yelloly in the closing stages, but had to settle for second. Huertas dropped to fifth by the finish, meaning Magnussen and Robin Frijns took third and fourth. After the race, Bianchi was disqualified for a technical infringement, but his Tech 1 team appealed the decision so his second place stands for now.

Nicolai Martsenko pulled out an amazing result to finish sixth on his debut – his best result in two seasons of German F3 having been a fourth place. Will Stevens was seventh, Marco Sorensen eighth, Andre Negrao ninth and Sam Bird tenth.

Pic did it again on Sunday morning, claiming pole once again. But once again, he failed to lead into the first corner as Sorensen took up first place with Bird following him into second place. Pic soon fell to fifth when Frijns and Korjus got by. There was another first corner collision, which involved Yelloly and Magnussen amongst others.

Frijns took second from Bird six laps in, and inherited the lead when Sorensen suddenly slowed and retired with mechanical issues. He opened up a lead of nearly ten seconds over Bird through the pitstops and onto the checkered flag. His result repeated the debut victory that his predecessor as Eurocup Formula Renault champion Korjus had managed at the track one year ago.

Bird was second, with Pic recovering to third past Korjus and Alexander Rossi. Stanaway finished sixth, ahead of Daniil Move, Stevens, Venturini and Negrao.

Frijns leads the standings by a healthy 12 points over fellow race winner Yelloly, with Bird, Bianchi, Magnussen and Pic behind after their podium finishes. The next round is a single race on the morning of the Monaco Grand Prix on 27 May.

Also getting their season underway in Aragon were the Eurocup Formula Renault 2.0 grid. Red Bull Junior Daniil Kvyat came into the season as the clear favourite and proved his worth with pole and victory in the first race.McLaren protege Nyck De Vries held second place throughout the race – an impressive performance in just his second weekend in cars. Stoffel Vandoorne took third.

A serious accident involving Daniel Cammish and Hans Villemi brought the safety car out, with the duo reportedly sustaining a broken pelvis and leg respectively. Rain began to fall during the safety car, leading to a red flag and an early end to the race.

Race two saw Oscar Tunjo claim pole, but he was passed by Kvyat on the first lap. The Russian recorded a double victory to get his Eurocup campaign off to a perfect start, and repeating the result he claimed in the ALPS season opener at Monza. It was Red Bull, Lotus, McLaren in the top three places, with Tunjo and De Vries completing the podium. De Vries was later handed a 25 second penalty after spinning on the formation lap and then retaking his original position on the grid.

That dropped him to 16th in the final classifcation, with Nato scooping the final podium place ahead of Vandoorne, Esteban Ocon and Toyota Racing Series champion Nick Cassidy. Pierre Gasly, Rowland, Silva and Chatin completed the top ten.

Kvyat has nearly twice as many points as anyone else at the head of the standings, with Nato and Vandoorne tied for second and De Vries and Tunjo sharing fourth place. Round two takes place at Spa on 2/3 June.

Auto GP World Series points leader Adrian Quaife-Hobbs was again the man to beat at the Hungaroring. After setting the pace in both practice sessions and claiming pole position, the British driver then won the opening race by a dominant 30 second margin. He had actually been third during the opening lap, but benefited when his two main rivals Sergey Sirotkin and Pal Varhaug made contact when they were running side-by-side through the final corner.Quaife-Hobbs rapidly built up a large advantage over the opposition, helped when Sirotkin and then Daniel De Jong both stopped out of second place. Victor Guerin took second ahead of Facundo Regalia.

46-year-old restauranteur Giuseppe Cipriani did an impressive job to lead the second race early on, but was passed by Varhaug and Quaife-Hobbs, who had started eighth on the reverse grid. Varhaug kept Quaife-Hobbs at bay through the pitstops and on to the finish to score his second win of the season. Sirotkin was close behind in third, after coming through from 14th. Not for the first time this season, that trio showed their class against the rest of the field.

Race two took the season into its second half, with rounds still to come at Portiamo in early June, Curitiba in Brazil in July and Sonoma in the US on 23 September. Quaife-Hobbs has 148 points, Varhaug 105 and Sirotkin 88.

The Italian F3 European Series was also in action in Hungary for its second round of the season. Race one was won by Eddie Cheever ahead of Riccardo Agostini and Robert Visoiu. Romanian Visoiu benefited when Brandon Maisano and Gerard Barrabeig made contact ont the opening lap, forcing both out of the race.

Race two saw Agostini claim his maiden win, aboard the only Mygale chassis on the grid up against the Dallaras. Henrique Martins was second, ahead of Prema teammates Maisano and Cheever.

In race three Sirotkin took his first win in the series, having another busy weekend. Fellow Formula Abarth graduates Patric Niederhauser and Visoiu completed the podium.

Cheever leads the points, eight ahead of Martins, with Agostini, Maisano and Sirotkin completing the top five. The next round takes place at Mugello on 9/10 June.

In Formula Abarth, all three Budapest races were won by a Brazilian. Nicolas Costa triumphed from pole position in race one ahead of Santiago Urrutia and Luca Ghiotto. Bruno Bonifacio was the winner in race two, ahead of Costa and Ghiotto, while in race three Bonifacio was again on the top step of the podium ahead of Urrutia and Kevin Jorg.

Costa now leads the points, two ahead of Ghiotto with Bonifacio a further 11 behind in third place. Round three for them also takes place at Mugello.

Rookie Lucas Auer claimed pole for the first and third races of the German F3 Cup season at Zandvoort. He led the first of those until the last lap, when he was passed by Jimmy Eriksson. Mitchell Gilbert completed the podium. Yannick Mettler won race two, ahead of Rene Binder and John Bryant-Meisner. In race three, Kimiya Sato joined ‘Lotus’ teammate Eriksson in winning upon his ‘step-down’ from the F3 Euro Series, with Gilbert and Dennis van der Laar in second and third.

Despite one second-place finish, a startline crash and a fourth place, Auer leads the standings, helped by the six points he got for his double pole. Gilbert is just one point behind, with Eriksson just another point further back. Round two takes place at the Sachsenring on 9/10 June.

Zandvoort was the second round of the season for the F3 Cup’s younger brother. In qualifying, Marvin Kirchhofer took pole for the first two races of the weekend, and duly converted both into victory. In race one he finished ahead of Luca Caspari and Gustav Malja. In race two Jason Kremer took second with Kuba Dalewski in third.

Talented female driver Beitske Visser suffered a heavy crash in qualifying and was forced to miss out on the first race. She finished the second race in eighth place, giving her pole for the final reverse grid race. She lost out to Hendrik Grapp at the start but later regained the place to record a maiden victory on home soil in her second weekend in single-seater racing. Malja and Kirchhofer completed the podium.

Kirchhofer leads the standings on 89 points, with Dalewski and Malja his nearest rivals on 57 and 55 respectively. They’re also back in action at the Sachsenring. 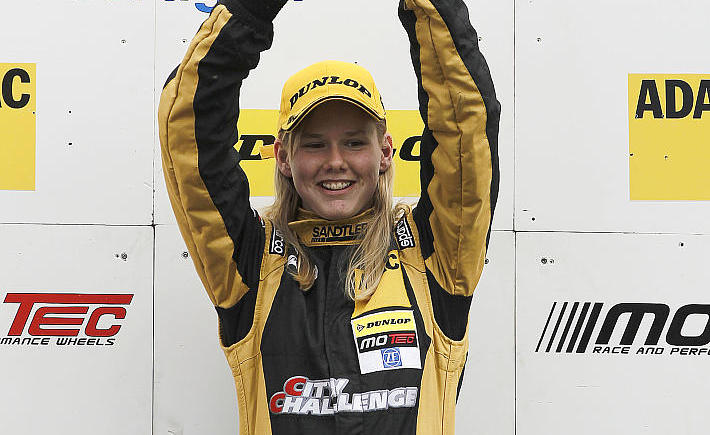 PaddockScout Driver of the Weekend: A hard one to call with a number of contenders, but Kvyat gets it for his double victory against a Eurocup grid full of talent.