Spaniard adds dominant victory in Zandvoort race to his Macau crown, while elsewhere the World Series by Renault takes to the brand new Moscow Raceway…

Daniel Juncadella dominated the annual race at Zandvoort in the Netherlands. Having been eliminated by teammate Roberto Merhi at the start of the 2011 edition, he was able to drive away from pole position this time to an unchalleged victory. His 2012 Prema teammate and chief rival Raffaele Marciello got ahead of Carlos Sainz Jr at the start to take second.

Sainz was passed one lap later by local favourite Hannes van Asseldonk, and although the Red Bull driver tried hard to get the place back late in the race he had to settle for fourth behind the Dutchman.

Last year Felix Rosenqvist benefited from the Merhi-Juncadella clash to win the race, but this year suffered misfortune of his own at the start when he fell from fifth to ninth. Teammate Pascal Wehrlein inherited fifth, ahead of Brits William Buller and Alex Lynn, American Michael Lewis, Rosenqvist and Sven Muller.

Josh Webster, a frontrunner in Formula Renault BARC, was the top driver in the older F308 car on his very first F3 appearance.

Robin Frijns scored his second win of the season from pole position at Moscow, shortly after driving an F1 car for the first time. Marco Sorensen pushed him hard, but too hard. He spun at the final corner and dropped to fifth. Jules Bianchi took second, ahead of Sam Bird – who lost the points lead to Frijns. Arthur Pic was fourth, ahead of Kevin Korjus who got by Sorensen. Antonio Felix da Costa was seventh, while Alexander Rossi and Kevin Magnussen were fighting over eighth at the very last turn when they were taken out by an out-of-control Lucas Foresti. Nico Muller picked up the pieces to take eighth, with Daniil Move and Will Stevens completing the top ten – the latter having pulled off numerous overtaking moves on a circuit that was otherwise proving a little too narrow and twisty to produce good racing.

The Sunday race saw Bianchi on pole with Sorensen again second, but the pair would collide as they fought over the lead at turn two. Pic escaped with the lead, while Sorensen then had a collision with Bird as well as Lotus teammate Cesar Ramos that put all three off the track and out of the race. Nick Yelloly was up to second after a safety car period, but lost out with a stall after his pitstop. Korjus also lost out in the stops, promoting Walter Grubmuller to second behind first-time race-winner Pic. Korjus got back ahead of Andre Negrao to finally take his first podium of the season. Rossi was fifth, ahead of Carlos Huertas and Bianchi, who’s chaotic first lap got worse when he was spun around by Felix da Costa. Stevens, Mikhail Aleshin and Magnussen completed the points. Frijns also lost ground on the opening lap, and later had a slow stop and a spin on his way to 17th.

Frijns leads Bird by ten points, with Bianchi a further 16 behind in third place. Silverstone is next on 25/26 August. 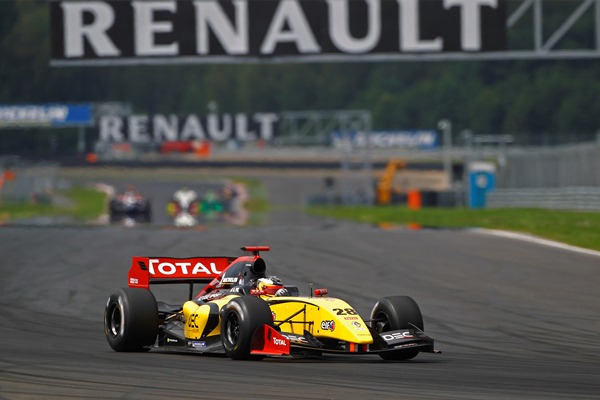 Pic's win was a comfortable one after steering through chaos (Photo: Renault Sport/DPPI)

The Moscow round provided Daniil Kvyat with the chance to race on home soil for the very first time, and he didn’t waste it. Having lost the points lead to Stoffel Vandoorne when the Belgian won both races at the Nurburgring, Red Bull Junior Kvyat won both races in Russia to retake the lead. Vandoorne claimed pole for Saturday’s first race but was beaten off the line by Kvyat, who took the win after a race-long battle. McLaren Autosport BRDC Award winner Oliver Rowland claimed his first Eurocup podium finish in third, while Red Bull-backed Formula BMW Talent Cup champion Stefan Wackerbauer scored his best Eurocup result in fourth. Mikko Pakari was fifth ahead of Melville McKee, Alex Riberas, Esteban Ocon, Guilherme Silva and William Vermont.

Sunday’s race saw a repeat performance, with Vandoorne again on pole but once again beaten off the line by Kvyat, who went on to win despite rain late on. Rowland was again third, just ahead of McLaren protege Nyck de Vries and Patrick Kujala. Wackerbauer was sixth ahead of McKee and Pierre Gasly, while Norman Nato was ninth after contact with Kujala. Paul-Loup Chatin completed the top ten.

Kvyat’s win moved him on to 147 points, just one ahead of Vandoorne, after four of seven rounds. Nato is back on 72 after a difficult weekend. The Hungaroring on 15/16 September is next up.

Championship leader Luciano Bacheta started the first race at Brands Hatch on pole but a dreadful start in very wet conditions opened the door for Kevin Mirocha to score a commanding first win. 15-year-old Matheo Tuscher was second, ahead of Bacheta. Mihai Marinescu took fourth ahead of Markus Pommer and Christopher Zanella and Hector Hurst, who was running fourth until an off.

Bacheta continues to have a comfortable points lead on 161.5, with Zanella on 124, Marinescu on 123 and Tuscher on 114. Paul Ricard in France is next up this coming weekend. 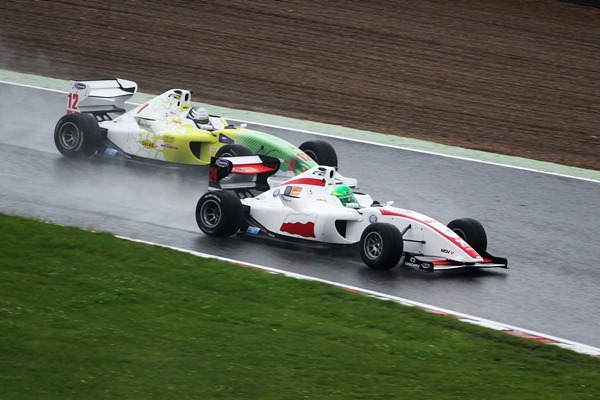 Mirocha left Tuscher and the rest in his spray (Photo: Formula Two)

Title rivals Gianmarco Raimondo and Mans Grenhagen again shared the race wins at Brands Hatch. Grenhagen won the first race, ahead of Niccolo Schiro. British F3 race winner Rupert Svendsen-Cook was third in his first appearance of the season, while Raimondo was fifth behind Sam Dejonghe. Raimondo won the second race, while Grenhagen retired. Facu Regalia was second after starting on pole, and Schiro was third.

Raimondo leads the standings on 155 points, with Grenhagen on 140 at the halfway stage of the season. Round five takes place at Paul Ricard this weekend.

Kimiya Sato led the first race at Spa-Francorchamps from pole but went off on the first lap and finished down in 13th. Teammate and championship rival Jimmy Eriksson inherited the win ahead of Tom Blomqvist and Rene Binder. Blomqvist won the second race after starting seventh on the reverse grid. Eriksson came through to second, while GP3 regular Daniel Abt was third upon his return to the series, although he led the race early on. Binder won the third race ahead of Blomqvist and pole-sitter Sato.

Eriksson was fourth, moving him on to 192 points with Sato on 151 after four of nine rounds. Assen is next up on 4/5 August.

The ADAC Formel Masters usually follows German F3 around, but this time it was just across the border at the Nurburgring. Ironic then that Belgian Alessio Picariello should claim his maiden victory in the first race ahead of polesitter Jason Kremer and points leader Marvin Kirchhofer. Race two saw Kremer win from pole, with Kirchhofer second and Picariello in third. After finishing the first two races in fifth and fourth places, Kirchhofer’s main rival Gustav Malja won the third race, with Kirchhofer again second and Kremer in third.

Kirchhofer lies 20 points ahead of Malja, with Kremer closing the gap and just nine points further back in what is almost certainly now a three-horse race at the halfway stage of the season. The Red Bull Ring lies next up on 10-12? August.

Nicholas Todt-managed Alexandre Baron continued his march towards the title by claiming his third and fourth straight wins at Magny-Cours. Enzo Guibbert and Victor Sendin completed the top three in the first race, while Darius Oskoui and Simon Gachet joined him on the podium in race two.

Baron now has 179 points, with Gachet his nearest rival on 103 points. Round five of seven takes place at Navarra in Spain on 8/9 September.

PaddockScout Driver of the Weekend: Daniil Kvyat – He may not have been the quickest in qualifying but the Russian made two great starts and produced two winning drives to take glory on home soil.

Next weekend: GP2 and GP3 are at Hockenheim, while Adrian Quaife-Hobbs can wrap up the Auto GP title at Curitiba in Brazil.

Frijns gets first taste of F1 with Red Bull in Moscow