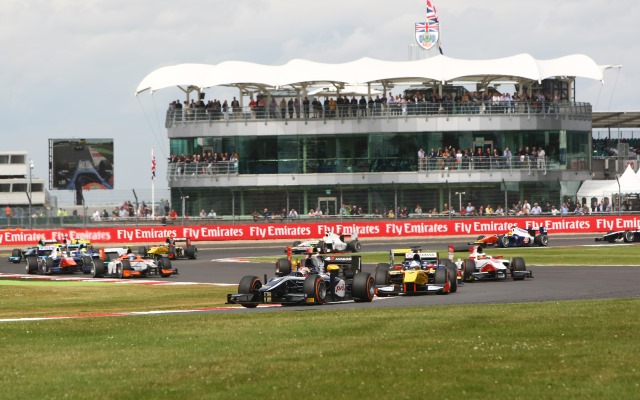 Mitch Evans scored his maiden GP2 victory in the feature race at Silverstone, defeating championship leader?Jolyon Palmer through the pitstop phase late in their race-long battle. Evans finished up seventh in the sprint race, enough to promote the Kiwi second-year driver up to fourth in the standings.

Palmer meanwhile raced his way to fourth, extending his points lead to 38. That was despite a third win from four weekends in the sprint race for Palmer’s nearest rival Felipe Nasr. The Brazilian had been poised to finish third in the feature race until being undone by a troublesome pitstop, dropping him to seventh.

Raffaele Marciello was the class of the field at the start of the weekend, topping practice, claiming pole position and leading the feature race until his pitstop. However, his car then ground to a halt with a mechanical failure and a double retirement was sealed when he was knocked into the gravel at the first corner of the sprint race.

Fellow rookie Stoffel Vandoorne inherited third to claim his second straight feature race podium, but again dropped out of the points in the sprint race. Marciello’s Racing Engineering team-mate Stefano Coletti replicated his Spielberg form, finishing fourth in the feature and then setting the fastest lap on his way to second in the sprint. Johnny Cecotto completed the sprint race podium, after finishing sixth in race one, while Julian Leal was fifth in both races. Marco Sorensen enjoyed a strong last-minute debut, finishing ninth and eighth.

GP3: Eriksson and Stanaway win to keep pressure on Lynn 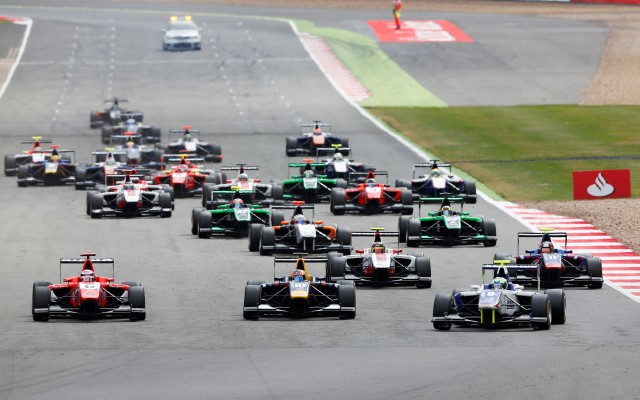 GP3 points leader Alex Lynn was denied a win at his home round at Silverstone, with his two nearest rivals Jimmy Eriksson and Richie Stanaway instead claiming the spoils. Eriksson beat Lynn to pole in qualifying and held on under pressure towards the end of the first race to secure his first victory.

He undid some of his hard work though by crashing out of race two, earning himself a five-place grid penalty for Hockenheim in the process. Lynn initially went backwards yet again at the start of the second race, but recovered to sixth, helped by the incident involving Eriksson. The Red Bull Junior now has an eight-point lead.

Stanaway was seventh – his worst result of the season so far – in race one but capitalised on his front row start for race two to claim his first single-seater win since 2011. He is third in the standings, ten behind Eriksson. Status team-mate Nick Yelloly was second, after a fifth in race two, while Emil Bernstorff finished fourth and third. Marvin Kirchhofer made the podium for the first time in race one, and was fourth in race two. Riccardo Agostini was impressive in just his second GP3 weekend, taking a sixth and a fifth. 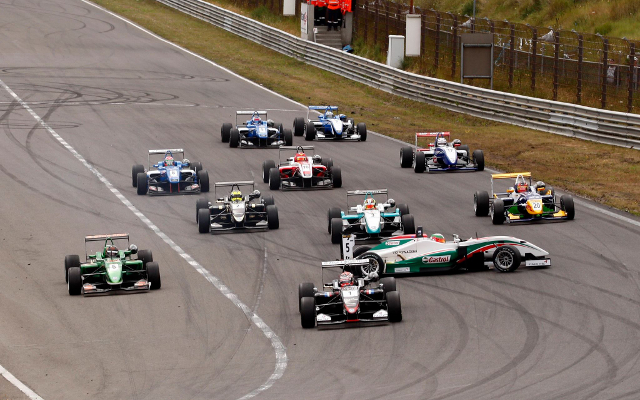 Max Verstappen‘s commanding win in the prestigious Zandvoort Masters F3 race was no less than was expected coming into the event for the 16-year-old who had dominated the European rounds at Spa and the Norisring in the previous two weekends. The scheduling of the Moscow round next weekend prevented European cars from taking part, leaving an entry of just 11 from the German and British series.

Verstappen didn’t have it all his own way though – he was matched to the thousandth in practice and trailed in a wet first qualifying. After nailing pole in the dry second session, he then had to take defensive action into the first corner, but stayed ahead and finished with a nine-second winning margin.

That was helped by a time penalty handed to his usual team-mate Jules Szymkowiak (Verstappen had switched from Van Amersfoort to Motopark for the race) for nerfing fellow VAR driver Sam MacLeod out of second place at the first corner. That gave second to Steijn Schothorst, making his F3 debut with Performance Racing, and third to Nabil Jeffri. 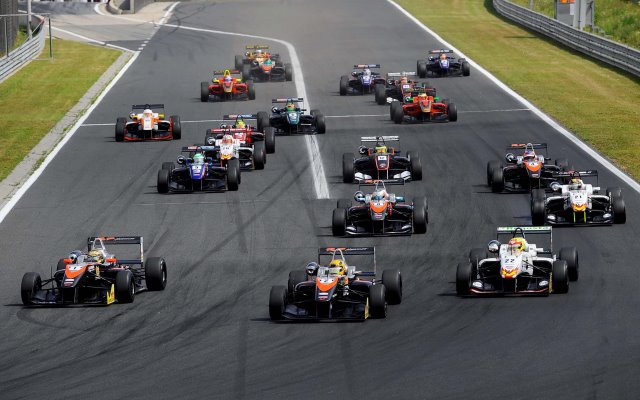 The Euroformula Open title race closed right back up again with wins for Artur Janosz and Alex Palou at the Hungaroring and a bad weekend for Sandy Stuvik. Janosz claimed victory from pole in race one with Palou second and Stuvik back in fourth after running off track at the start.

In race two, Palou got ahead of Janosz to claim his second win of the season while Stuvik retired with suspension damage. That means that. after trailing Stuvik by 29 points coming into the weekend, Janosz is now back into the standings lead. Stuvik is just five points behind, with Palou a further four back and a massive 78 ahead of anyone else.

Making the podium for the first time were Andres Saravia in race one and Konstantin Tereshchenko in race two. Most of the other drivers in the top ten had tough weekends, including double non-scores for Cameron Twynham and Tanart Sathienthirakul. 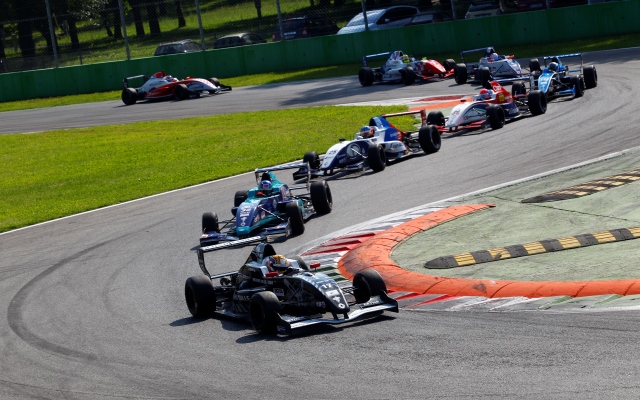 Charles Leclerc claimed the first two wins of his single-seater career in the Formula Renault 2.0 Alps round at Monza. The Nicolas Todt protege inherited the race one win when surprise pole-sitter Stefan Riener was given a time penalty for jumping the start, dropping him to third. Leclerc started race two from pole, and recovered from losing the lead at the start.

Matevos Isaakyan was the driver to get the jump on Leclerc in race two, but the young Russian had to settle for second in the end. He would have had the same result in the first race had he not been collected by a spinning backmarker. That retirement was enough for Isaakyan to be jumped in their fight for second in the standings. Alessio Rovera scored a double podium – second in race one and third in race two.

For the first time this season, Nyck de Vries finished off the podium, taking a fourth and a sixth after a poor qualifying left him starting back on the fifth row. It means the Dutchman hasn’t yet wrapped up the title, but with a 70-point lead, he can do that next time out at Mugello if he isn’t out-scored by more than 20 points by Leclerc.

French F4: Sorensen gets a hat-trick at Val de Vienne 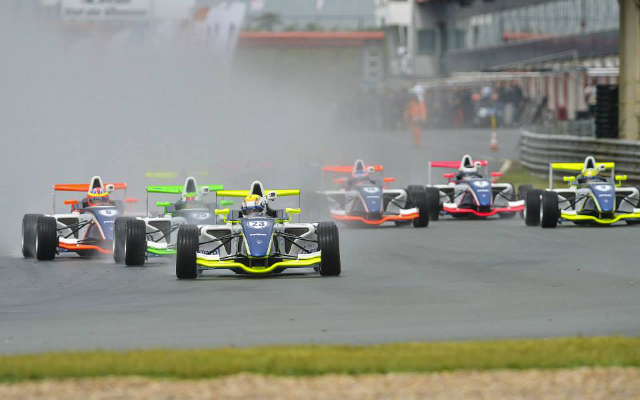 Lasse Sorensen became the first driver to win all three races in a French F4 round this season with a perfect weekend at Val de Vienne. The Dane claimed his maiden victory in the category from pole in race one, before battling his way to the front from tenth on the reverse grid in race two. On pole again for race three, he absolutely dominated this time, winning by 13 seconds. His performances have propelled him into a 26-point lead.

Felix Hirsiger threatened to get his season really firing with second in race one, but incidents prevented him from scoring in the latter two races. Dorian Boccolacci lost the points lead but was still the second top-scorer for the weekend behind Sorensen. A spin dropped him from third to seventh in race one, before taking fourth and second in the remaining races.

Paul Hokfelt scored a maiden podium in race one, Denis Bulatov and Joseph Mawson completed the podium in race two and Valentin Moineault was third in race three. Patricio O’Ward was an impressive debutant, taking a fourth and two fifths.

A superb weekend from the Dane, not only dominating from pole but also working his way through the field in the reverse grid race. A good weekend in the Sorensen household, with his older brother Marco’s fine GP2 debut. 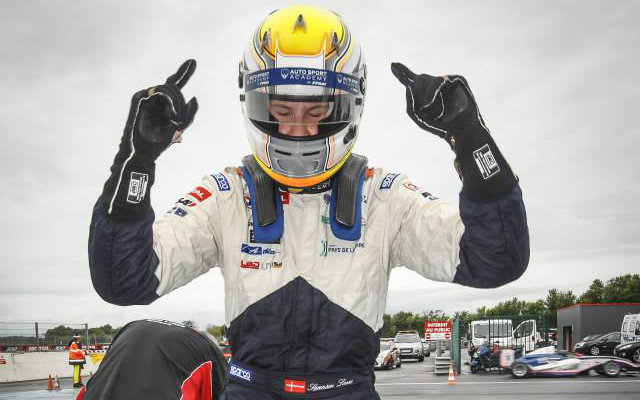