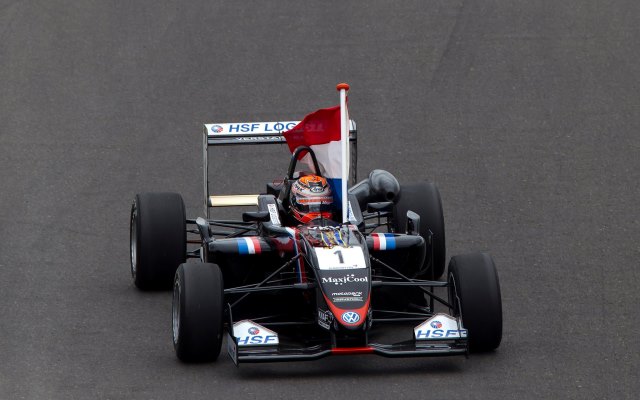 Max Verstappen continued his run of race wins over the past three weekends as he converted pole to victory in the Zandvoort Masters F3 event.

Verstappen had to defend off the line to protect his lead from Sam MacLeod, who made a faster getaway alongside him on the front row. Verstappen had managed to stay ahead into Tarzan when MacLeod was hit from behind by his own Van Amersfoort Racing team-mate Jules Szymkowiak, sending the British driver off into the gravel.

Verstappen, who switched from VAR to Motopark for this event, quickly built a comfortable gap up over Szymkowiak and later gradually extended it to 6.3 seconds by the finish.

The win follows his triple victories in the FIA F3 European Championship at both Spa-Francorchamps and the Norisring, and emulates the win that his father Jos enjoyed in the Masters race in 1993.

Szymkowiak finished second to his European team-mate Verstappen but was handed a post-race penalty of 20 seconds for the collision with MacLeod, dropping him to fifth.

That handed second place to Steijn Schothorst, driving in his first ever F3 race for Performance Racing. The Eurocup Formula Renault 2.0 regular fell behind Nabil Jeffri when he ran off track on lap two, but the Dutchman quickly regained the place from the Malaysian later that same lap.

Jeffri was classified in third ahead of his Motopark team-mate Indy Dontje, who passed Fortec’s British series leader Martin Cao at the end of lap six. Dontje soon set the fastest lap of the race, but was unable to pass Jeffri.

Cao fell back far enough to not benefit from Szymkowiak’s penalty, but held on to sixth ahead of Nikita Zlobin, with the Double R trio of Dennis van de Laar, Camren Kaminsky and Andy Chang completing the ten finishers.