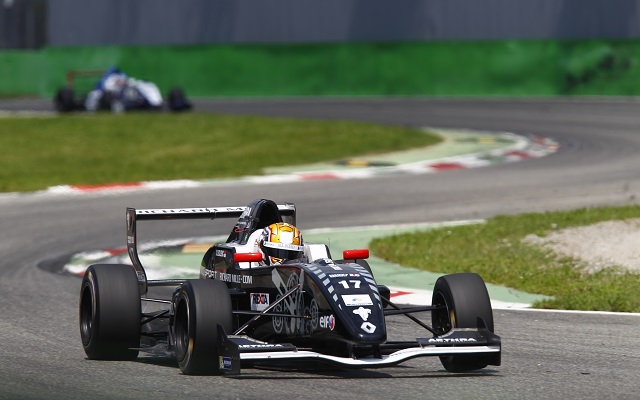 Leclerc, who inherited the win yesterday due to Stefan Riener‘s jump start, was the one to take the checkered flag first today, finishing two seconds clear of nearest rival Matevos Isaakyan.

Despite starting the race from pole, Leclerc did not manage to lead the field into turn one, having lost out to Isaakyan off the line. However, the Fortec driver managed to keep up with the Russian over the first few laps and took the spot back shortly thereafter with a late-braking move into Variante del Rettifilo.

It was a comfortable race for Leclerc from that point on as Isaakyan struggled to challenge him for the lead yet maintained good pace, preventing any other challengers from having a shot at the Monegasque race leader.

BVM’s Dario Capitanio was seemingly on course for his first podium in the category, putting pressure on Isaakyan for second for much of the race. However, Isaakyan’s solid defending left Capitanio vulnerable to attacks from Cram’s Alessio Rovera, who managed to pass his compatriot into turn one on the final lap of the race.

As such, Leclerc and Isaakyan made up the top two, finishing two seconds apart, while Rovera narrowly held on third. Capitanio managed his personal best result in fourth, while Pietro Fittipaldi picked up fifth for MGR Motorsport.

Championship Nyck de Vries moved up to sixth early on, having avoided a first-lap incident involving Riener, Denis Korneev and Ben Barnicoat in the chicane, and kept that position until the checkered flag.

Simon Gachet fought his way up to seventh place, while Patric Armand beat Hong Li Ye to ninth. Jack Aitken took tenth on the road but received a post-race penalty, which allowed Matteo Gonfiantini to inherit the place.