On Saturday at the Nurburgring, Jules Bianchi was unstoppable. The Ferrari Driver Academy member and Force India reserve driver claimed pole position and then converted that into a commanding first victory in the championship. Nico Muller took second ahead of Robin Frjins and Arthur Pic. McLaren-supported Kevin Magnussen was fifth ahead of fellow Dane Marco Sorensen. Third-year driver Walter Grubmuller was seventh, with Sam Bird – the championship leader coming into the weekend – in eighth, while new Red Bull recruit Antonio Felix Da Costa was ninth.

Now the points leader again, Frijns claimed his first pole in the category on Sunday morning, but the weather caused havoc in the race. Nick Yelloly ended the race as the first repeat winner of 2012, nearly 30 seconds ahead of the opposition. The Brit had started 14th, but stayed out on track as many pitted for wet tyres during an early rain shower. The track quickly dried again, at which point most of the frontrunners made their mandatory tyre stop for slicks. Yelloly stayed out in the lead, and was rewarded when the rain came down again. This allowed him to fit wets at his mandatory stop, while everyone else had to come in again.

Andre Negrao deployed the same strategy, but lacked pace and was passed for second before the end by Sorensen. Bird was fourth, to move back into the standings lead tied on points with Frijns, who finished the race in fifth. Russians Mikhail Aleshin and Daniil Move were next, ahead of Magnussen and Alexander Rossi.

The points leader gets a demo run in a Red Bull at the next round in Moscow, but with Bird contracted to Mercedes that opportunity will instead go to Frijns – his first experience in F1 machinery. Yelloly is third in the points, ten behind Bird and Frijns. Moscow takes place on the 14/15 July.

A week ago, Stoffel Vandoorne had taken both wins in the Northern European Cup round held at the Nurburgring. The Belgian driver returned to the circuit this past weekend for the third round of the Eurocup, and was again a double winner to take over the lead of the standings.

On Saturday morning he took pole position, and he successfully converted this to a maiden Eurocup win during the first race, although he did have Norman Nato pressuring him throughout. Paul-Loup Chatin completed the top three, locking out the podium for the trio fo graduates from the 2010 F4 Eurocup season. McLaren protege Nyck de Vries was fourth ahead of Red Bull’s Daniil Kvyat.

Vandoorne took pole again on Sunday, and completed a dominant weekend with another victory – as the conditions made tyre choice difficult. Vandoorne opted for slicks, while Kvyat alongside him went for wets. That helped the Russian to take the lead at the start while Vandoorne dropped to fourth. Kvyat made an error on lap two, with Mikko Pakari taking up the lead as the safety car came out. Slicks became the tyre to have after the restart, allowing Vandoorne to take the lead. Brit Melville McKee started the race from 32nd on the grid, but drove through to second place ahead of Pierre Gasly, Chatin and Jordan King.

Vandoorne has a 13 point lead over Kvyat, who finished down in 22nd and will look to bounce back on home soil at Moscow. 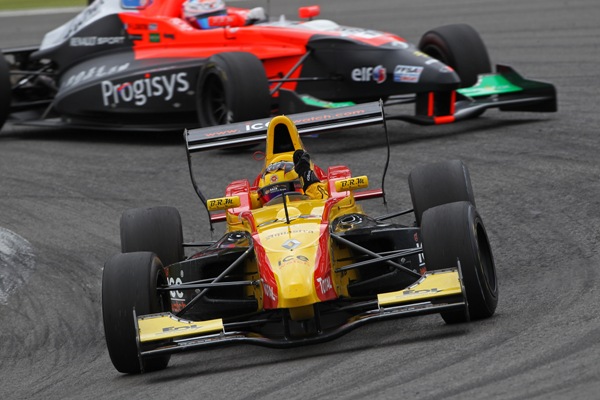 Euro Series points leader Daniel Juncadella won the first race on the road, but only after colliding with German rookie Pascal Wehrlein and then Ferrari junior Raffaele Marciello within a couple of corners towards the end of the race. Juncadella was disqualified post-race, but the drivers behind him were not promoted, producing the bizzarre scenario of a race with no winner!

William Buller was the moral victor in second place, ahead of a best result for British rookie Emil Bernstorff. Brazilian Pietro Fantin won the British F3 race in ‘fourth’ ahead of rival Felix Serralles. Jack Harvey ran into British F3 title rival and teammate Jazeman Jaafar at the start, while Carlos Sainz Jr, who entered the weekend third in all three standings, retired after sliding into a wall on the first lap.

Race two produced an overall win for British F3 racer Harry Tincknell from reverse grid pole, ahead of Serralles. Wehrlein claimed the Euro Series win for the first time after passing his more experienced teammate Felix Rosenqvist. Harvey scored vital points in seventh overall and third in class, as Jaafar only got as far as 17th. Sainz failed to finish again after a car failure. Juncadella got through the order to 11th overall and fifth in the Euro Series.

Wehrlein started race three from pole after setting the fastest time in qualifying, but was taken out at the first turn by Buller after starting behind the safety car in heavy rain. Marciello had already passed down the inside and he went on to win a shortened race ahead of Juncadella. Serralles took his second overall podium of the weekend, his third? British F3 podium of the weekend and his third win in that category this season. Bernstorff was fourth, with Hannes van Asseldonk fifth and Fantin sixth.

Harvey and Jaafar both retired after more early contact, and are separated by four points at the head of the British standings with Serralles now only six points behind them.

Four straight non-scores has dropped Sainz to fifth in British F3, sixth in the Euro Series and although he’s still third in the European Championship he’s dropped further behind the leading pair. After a week where the ruthlessness of Red Bull’s junior scheme was displayed, the young Spaniard needs to up his game.

The next race for the F3 contenders is the prestigous Masters of Zandvoort on 15 July.

The series formerly known as Formula BMW Pacific made its first trip to Europe to race at Paul Ricard in France last weekend. Nabil Jeffri won the first race ahead of South African debutant Ernie van der Walt and Weiron Tan. After starting the first race from pole but being penalised for being out of position at the start, Afiq Yazid bounced back to win the second race ahead of Jeffri and Aston Hare. Jeffri leads Hare by nine points at the top of the points, with the F3 races at Spa on 27-28 July hosting the second half of their European leg.

PaddockScout Driver of the Weekend: Another fine display from Stoffel Vandoorne to put him in the lead of the Eurocup.

Next weekend: GP2 and GP3 action from Silverstone, as well as German and Italian F3 and supports from Oschersleben and Misano respectively.