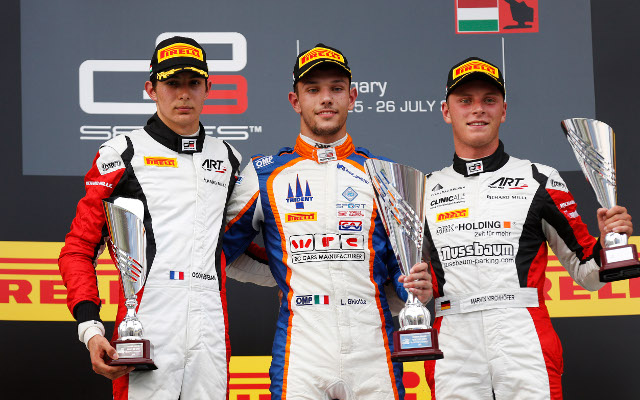 With his lead in the GP3 standings increasing after victory at the Hungaroring, Luca Ghiotto continues to shade the expected title favourites, writes Peter Allen.

Luca Ghiotto remains on course for an against-the-odds GP3 title triumph after his second win of the campaign at the Hungaroring last weekend.

The Italian heads the standings going into the summer break with 23 and 25 points respectively over the high-profile ART Grand Prix pairing of Marvin Kirchhofer and Esteban Ocon.

When European F3 champion Ocon lived up to pre-season expectations by winning the opening race at Barcelona, you could have been forgiven for thinking that was it.

Kirchhofer, third in GP3 last year, made up for a lacklustre start to that weekend by winning the second race, leaving him just a couple of points behind his team-mate.

But Trident driver Ghiotto – making the full-time switch to GP3 after a mostly anonymous season in Formula Renault 3.5 – proved his Barcelona pole was no fluke by repeating it at Spielberg. But this time he converted it into victory – and a 12-second win at that.

With Ghiotto back on the podium in race two, Kirchhofer down the order in race one and Ocon excluded from the second of his podium finishes that weekend on a technicality, he left Austria with 19 points in hand.

At Silverstone he was off the podium, enabling his rivals to gain ground with a win for Kirchhofer in race one and a P2 for Ocon in race two.

But Ghiotto returned to his best in Hungary, with his third pole from four rounds and victory number two, with Ocon and Kirchhofer forced to settle for places on the podium in race one.

Notably, Ocon scored a second P2 finish on Sunday, allowing him to make up ground from his earlier exclusion. But with four rounds done and four to go, more than that will be needed to catch Ghiotto in the second half of the year. 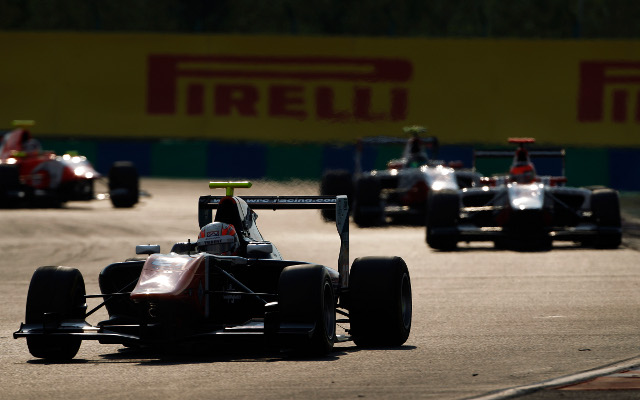 Ghiotto and Trident’s form has been quite remarkable. In qualifying, he’s able to find the pace to beat the competition to pole, while in race-trim he is able to preserve his tyres better than the rest to pull away in the closing stages.

Yes, being at the head of the field is always going to aid tyre conservation, since following another car in GP3 has proven to be hard work. But Kirchhofer was in that position at Silverstone and found himself under attack late on.

If it was the case that Ghiotto’s success was purely down to he and his car package being better at keeping life in the tyres, it might be hard to stomach. At GP3 level I’d much rather see drivers rewarded for outright pace than for tyre saving.

But it isn’t the case at all, given Ghiotto’s near-dominance of qualifying. He could have a 100 per cent record had he not gone wide on a crucial lap at Silverstone.

ART is not where it wants to be when it comes to tyre preservation in comparison to Trident, but it’s not particularly struggling either, given that its drivers are able to sustain podium positions.

At the moment though, Ocon and Kirchhofer are second to best to Ghiotto in qualifying and races, and together with their team will need to find something over the break to turn that around and claim the title they need to maintain some career momentum.

As at Silverstone, champion in waiting Stoffel Vandoorne misses pole and after a penalty leaves him fifth in race one, he takes second in race two. Alex Lynn wins feature race from pole, with Pierre Gasly second and Sergey Sirotkin third to complete all-rookie podium.?Nobuharu Matsushita scores sprint victory with Sirotkin third again to close on P2 in the standings, which?Rio Haryanto takes from a non-scoring Alexander Rossi. 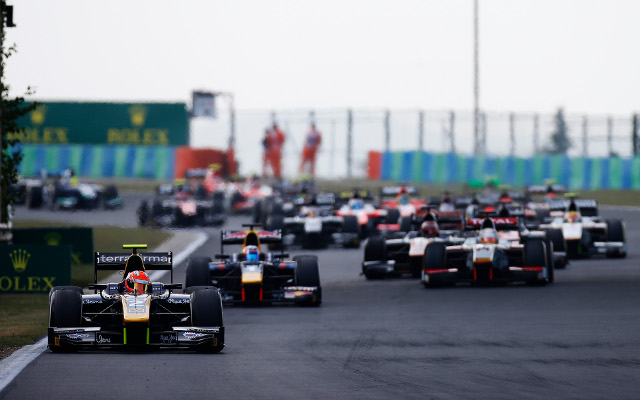 Luca Ghiotto pulls away again in title race with second win from third pole from four rounds. Esteban Ocon and Marvin Kirchhofer have to make do with second and third, but Ocon is second again in race two. Kevin Ceccon scores his second straight reverse-grid win, while Matt Parry makes the podium for the second time after team-mate Jimmy Eriksson is penalised for track limits abuse.

Rookie Max Defourny scores first victory at home circuit from pole in race one, leaving Kevin Jorg and Callan O’Keeffe behind. Leader Louis Deletraz picks up a half-points victory from a washed-out race two that lasted for three safety car laps, with Defourny and Jorg completing the podium.

Emiliano Marino and?Martin Moggia?share the wins again. After Moggia takes third in race one behind?Gaston Cabrera, he comes from seventh on the grid to win the second, taking the lead when pole-sitter Marino spins out.?Nicolas Cazal and?Federico Cavagnero join Moggia on the podium.