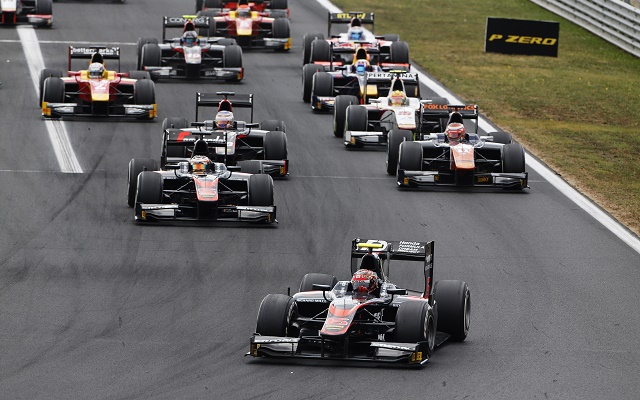 Having made his way from 21st on the grid to eighth yesterday, Matsushita took advantage of his reverse-grid pole to establish a sizeable lead even before turn one.

With Raffaele Marciello slow off front row, Matsushita now had Vandoorne behind, while Sergey Sirotkin also passed the Italian for third.

As ART ran in 1-2, Vandoorne got as close as ever to his teammate on lap three, but then dropped off, giving up several seconds over the next few laps as he appeared to manage his tyres.

Him and Matsushita subsequently maintained the status quo until well after halfway point as they took turns upping and lowering the pace.

But while the Japanese driver never came under much pressure, eventually cruising to his maiden win, Vandoorne soon came under pressure from Sirotkin.

The Russian had a look on the final lap, but Vandoorne held on to second, with Sirotkin settling for a fifth podium from the last seven races.

Pierre Gasly ran in sixth for most of the race, but was overtaken by both Norman Nato and Robert Visoiu with two laps to go and had to do with eighth, finishing ahead of teammate Alex Lynn and compatriot Arthur Pic.

It was a nightmarish race for teams’ championship frontrunners Racing Engineering, whose drivers suffered from heavy tyre degradation. Jordan King ran seventh early on but slipped to seventh, while Alexander Rossi ended up pitting for an unscheduled tyre change and claimed 19th.

Sergio Canamasas made waves on the opening lap, going from 25th to 10th, but also struggled with tyrewear and eventually finished 16th.