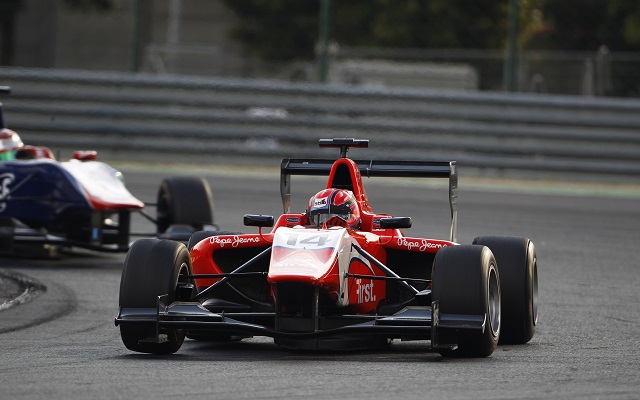 Arden driver Kevin Ceccon triumphed in the second GP3 race at the Hungaroring.

The Italian celebrated his second sprint win in a row and, just like at Silverstone, he claimed the win from second on the grid.

Although it was Antonio Fuoco who started from pole, he suffered a first lap retirement for the second time this season.

The Ferrari junior lost the lead to Ceccon off the line and had to defend from?another Arden driver in Emil Bernstorff.

The Briton attempted to overtake on the outside at the turn six and seven chicane but Fuoco did not give up the position and the duo had to leave the corner side-by-side.

There was no way to avoid collision and Fuoco was sent into the wall, his car lifting off slightly. Bernstorff pulled over a corner later, ending his streak of top-six finishes in 2015.

As a result of the crash, the safety car made an appearance and Esteban Ocon and Jimmy Eriksson subsequently became?Ceccon’s closest chasers at the restart. However, the Italian maintained the lead, soon building up an advantage of more than a second.

While there was no change in the top three, Matt Parry had an aggressive restart, getting past championship leader Luca Ghiotto on the outside of turn one to take fourth.

It was all calm afterwards at the front, leading to Ceccon taking the chequered flag first and Ocon finishing second for the third consecutive GP3 race.

Koiranen duo Eriksson and Parry secured third and fourth ahead of Ghiotto, who extended his championship lead as the highest point-scorer of the weekend.

Ghiotto’s nearest rival Marvin Kirchhofer endured a difficult start to the race, relegated to ninth from sixth. He was able to overtake Pal Varhaug after the restart and, thanks to the crash in the beginning, ended up sixth.

UPDATE: Eriksson received a five second time penalty for gaining advantage over Ghiotto by leaving the track. As a result, he has been demoted to sixth from third, giving Parry the final podium spot.

In addition, Alex Bosak has been given a ten second time penalty for causing a collision with Artur Janosz.

Finally, Samin Gomez got a five place grid penalty for the following race after hitting Jann Mardenborough‘s car during the safety car phase.