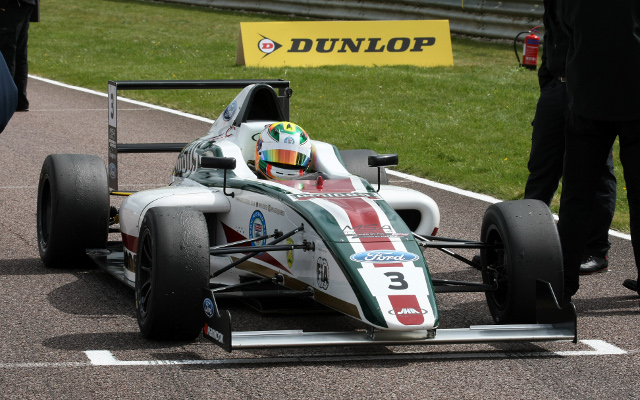 Sennan Fielding claimed his first victory in MSA Formula with a winning drive in the reverse grid second race at Oulton Park.

Starting the race from third after finishing eighth in race one, Fielding used a flying start to take the lead into Turn 1 and at one stage had a three-second margin on his way to the win.

He has now won races in three different F4-level championships, following victories in the BRDC and Italian series last year.

Matheus Leist made strong progress early on to move from sixth to second in two laps, and set the fastest lap even though he finished two seconds behind Fielding.

After slipping back to ninth on the last lap of race one, Dan Ticktum had the chance to start from the front row of the reverse grid but the double Donington winner fell back to fourth early on as Fielding and Leist moved forwards.

Ticktum was able to recover a podium place by passing pole-sitter Dan Baybutt. Petru Florescu sat fifth until serving a drive-through penalty for being out of position at the start, which promoted Jack Barlow and Colton Herta, who cleared Rafa Martins on the first lap.

It also allowed Lando Norris and race one winner and championship leader Ricky Collard to gain a place each from their starting positions, and Tarun Reddy to climb into the top 10.