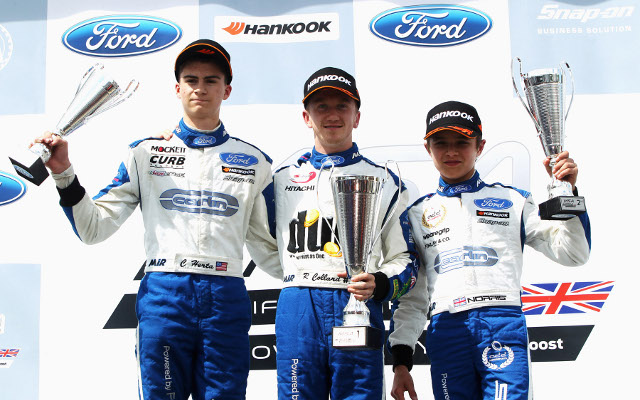 Ricky Collard extended his lead in the MSA Formula standings after beating Lando Norris off the line to win the first race of the weekend at Oulton Park.

From second on the grid, Collard led pole-sitter Norris into the first corner.

The safety car spent three laps on track after Toby Sowery‘s debut with Fortec came to an early end on lap two.

After the restart, Norris pursued Collard all the way to the finish but the Arden driver held on to win by just under half a second.

American Colton Herta scored his maiden podium finish after an overtake on Rafa Martins, later setting the fastest lap in his attempts to catch the leaders.

Matheus Leist, Jack Barlow and Dan Ticktum held their respective starting positions of fifth, sixth and seventh until the final lap, when a technical problem slowed Ticktum and relegated him behind Petru Florescu and Sennan Fielding.