written by Valentin Khorounzhiy 9 May 2013

Headlining the weekend was the European F3 round at Hockenheim, taking place in support of the DTM season opener.? Italian prodigy Raffaele Marciello, coming into the weekend with a huge lead in the championship, continued to run in a league of his own, taking double pole in qualifying one and converting both pole positions into wins. He ran away with race one in wet conditions and, while winning the second one proved a bit tougher, Marciello managed to secure his fifth win of the season. He didn’t qualify well for race three, but had a decent run to end up in fourth, which puts him way clear of the opposition in the standings ahead of Brands Hatch.

Where Marciello had a misstep in qualifying two, it was guest driver Daniil Kvyat who picked up the slack. Having looked strong in practice, he took pole in his first ever European F3 round and, after two strong finishes in race one and two, scored a podium in the final race. He did not have the pace to fight for the win, but looked confident in wheel-to-wheel and wholly deserved his plaudits.

With the dominance produced by the Ferrari junior Marciello, the fight between the other regulars was mostly for being best of the rest and Fortec’s Felix Serralles came out on top in that. Somewhat struggling to find his feet in the beginning of the season, the Puerto Rican was on top of his game at Hockenheim, producing great drives that allowed him to step on the podium for the first and second time in the season. The three strong points hauls mean that Serralles is only half a point off of third and should be taking his maiden win in no time.

Second in the standings, Felix Rosenqvist had a very quiet round up until race three, where he managed to add to his previous five points in two races with a win. A signature lightning start and great control of the lead meant that Rosenqvist takes his second win of the year, but he let Marciello get ahead even further, who he now trails by more than 70 points. 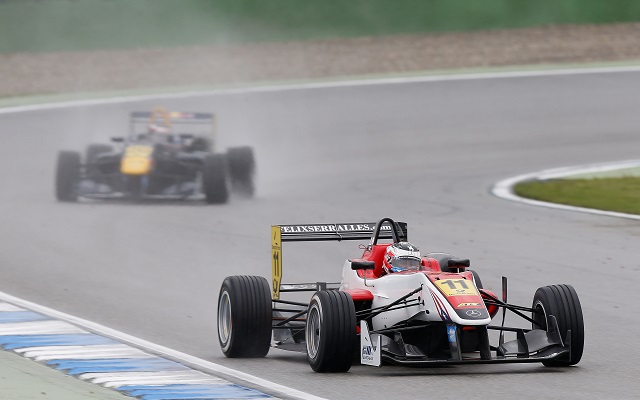 While experienced Brits Harry Tincknell and Will Buller both had anonymous rounds, Red Bull junior Tom Blomqvist put in a masterful outing to add two podiums to his Monza success. The Formula Renault 2.0 NEC graduates from Britain were also strong, with Josh Hill taking his first series podium in race two and Jordan King challenging, albeit unsuccessfully, for the win in race three. Prema rookies Lucas Auer and Alex Lynn were not in contention, fighting only for low-scoring positions in the top ten, while Sven Muller, who won races with Prema last year, finally showed form with ma-con by taking in his best weekend to date this year.

Report: Marciello makes it two for two on Saturday

The Auto GP series leaders Kimiya Sato and Sergio Campana continued their fight for the top spot at Hungaroring. It was the Japanese driver this time who took the feature race win, while Campana would only finish third. However, the Italian showed a more consistent round this time, as he was on the podium again in race two, with Sato only sixth. The Euronova man now leads Sergio by five points, with 97 to 92.

They’re no longer the only ones in this fight however, as Vittorio Ghirelli got one step closer to the standings lead with a powerhouse performance in Hungary. He cleared the field in practice and did the exact same thing in qualifying, running virtually unopposed. Pit stop troubles cost him the race one win, but, as he finishes second in that, he then charged to victory in the reverse-grid outing, taking a well-deserved maiden win.

The best of the rest is now Riccardo Agostini, who finally displayed some much needed consistency to finish fourth and third in the two races. Luciano Bacheta and Robert Visoiu, usually strong contenders for podiums, left with barely any points this time, while Tamas Pal Kiss produced two fifth-placed finishes on his debut. Bacheta’s teammate Narain Karthikeyan continued to bring in points, but should hope to challenge for more, given his experience.

Report: Sato triumphs in race one

Next round: Silverstone, 1-2 June

The Cammish show continues amidst battles for second

Daniel Cammish continued his masterful clean sweep of the series, taking another three wins at Thruxton to bring his streak to nine overall, meaning that, even with more than two thirds of the season left to go, it’d take extraordinary effort to dethrone him from the standings lead.

The rest of the podium spots were distributed between three people throughout the weekend’s races – Harrison Scott, Juan Rosso and Andrew Richardson. While finishing all the races in the points, Nico Maranzana did not achieve any outstanding results and now trails Scott in the points for second.

Next round: Oulton Park, 9 June

While Kimmy Larsson had the honour of becoming the first polesitter in the series, it was Martin Rump who sweeped up the weekend, taking wins in races one and two to lead the series after the opener. In both races Larsson managed to come second, leading Erik Johansson and Janneau Esmeijer. Good points finishes from Paul Blomqvist, brother of Tom, and Indy Dontje of ADAC Formel Masters fame also see them in good positions in the standings ahead of round two.

PaddockScout Driver of the Weekend:

Many people excelled this weekend but Ghirelli’s stunning performance was not only impressive but rather unexpected. Showing good pace in the previous two rounds, the Italian was the man to beat at Hungaroring and would’ve left the round with the maximum amount of points possible if not for a botched stop in race one. Even with that, a win, a podium, a pole and two fastest laps make up a weekend that Ghirelli should be cherishing for quite some time.

Lancaster makes GP2 return in place of Varhaug at Hilmer