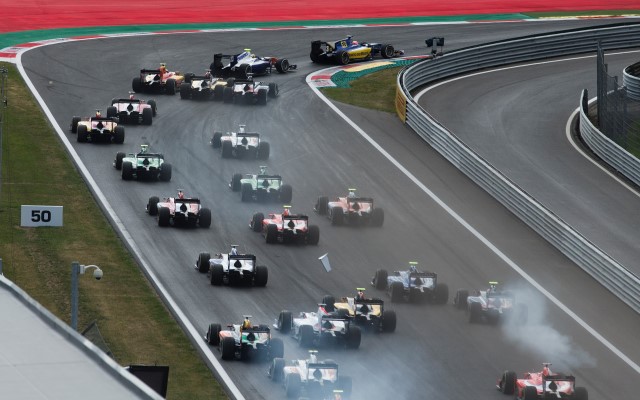 Two rounds on from finally breaking his win duck, Felipe Nasr claimed his maiden feature race victory on the championship’s first visit to Spielberg. The Brazilian went from third to first on the grid, and led comfortably until the end. He suffered a second consecutive early sprint race retirement though, after contact on the opening lap. Still, with Jolyon Palmer only managing a fifth and a sixth on a below-par weekend, Nasr has cut the gap to the leader from 46 points to 33 over the Austrian weekend.

The feature race delivered the most exciting GP2 podium for some time, with rookies Stoffel Vandoorne and Raffaele Marciello finally having a strong run to finish second and third. Vandoorne’s result was his first points finish since his Bahrain win on debut, but just as then, he lost out in the pack at the start of the sprint race – avoiding the contact between team-mate Takuya Izawa and Nasr – and finished down in 15th.

Ferrari counterpart Marciello hadn’t yet scored a point in GP2, but ended the weekend with a pair of third-places. On a good weekend for Racing Engineering, his spent much of his time racing team-mate Stefano Coletti, getting ahead of him in the feature race but dropping behind him late in the sprint race after pushing too hard on his tyres trying to catch Johnny Cecotto. Cecotto had started the feature race from pole but dropped back to finish sixth, before putting things right on Sunday and claiming his second win of the campaign.

On a better weekend for many of GP2’s most highly-rated drivers, Mitch Evans and Alexander Rossi scored points in both races but squandered front row starts in the sprint race and fell back to fourth and fifth.

GP3: Lynn and Bernstorff make it a Carlin double 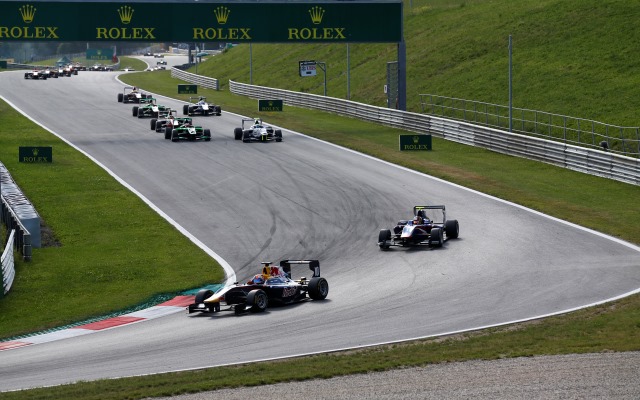 Alex Lynn produced a repeat performance in round two of the GP3 season at Red Bull’s home circuit, claiming pole, victory and the fastest lap in race one. And just as in Barcelona, his race two would come undone on the first lap, this time forcing him to pit to repair damage and seeing him finish 19th. Still, another 31 points scored means he has extended his championship lead from eight to 13 points.

Lynn’s Carlin team-mate Emil Bernstorff fulfilled his rear-gunner role in race one to finish second and claim his maiden podium, before steering his way past contact ahead of him to claim victory in race two. After just the one point in Barcelona, Bernstorff has vaulted up to fourth in the points.

Jimmy Eriksson has moved up to second in the standings as he continues to put his point-less 2013 behind him with his second and third podiums from four races. In both races he put overtaking moves on Richie Stanaway, beating him to third in race one and second in race two.

Marvin Kirchhofer and Matheo Tuscher had continued their strong starts to the season with fifth and sixth respectively in race one – Tuscher from 14th on the grid. However, their hopes of victory from row two in race two came to nothing. A gearbox problem stopped Kirchhofer from taking the start, while Tuscher crashed into Luis Sa Silva after he was forced onto the grass while attempting a pass for the lead. 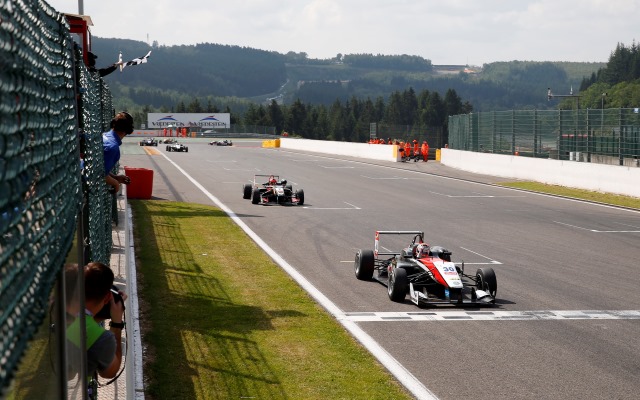 Max Verstappen became the first driver to win all three races in an FIA F3 European Championship weekend as the 16-year-old karting graduate demonstrated his extreme talent with a stunning treble at Spa-Francorchamps. In all three races he took the lead early on and stayed ahead through a mid-race safety car each time.

Verstappen prevented Esteban Ocon winning at least one race in a weekend for the first time. The Frenchman began the first race from pole but was swamped on the Kemmel straight and found himself squeezed between two others at Les Combes, causing his first retirement of the year. He finished second in the later two races, although was again on pole for race three.

A lacklustre weekend for Tom Blomqvist though was enough for Ocon to stretch his lead from 82 to 94 points. Blomqvist was fourth in race one, before recovering from disastrous qualifying results to finish eighth and sixth in the later two. Lucas Auer finished second in race one, but crashed out of race two with Felix Serralles and was out the points again in race three.

Gustavo Menezes was the surprise of the weekend, following a sixth in race one with two third-place finishes, the first coming after a shock pole in wet conditions. Jake Dennis took his second podium of the campaign in race one with third place. 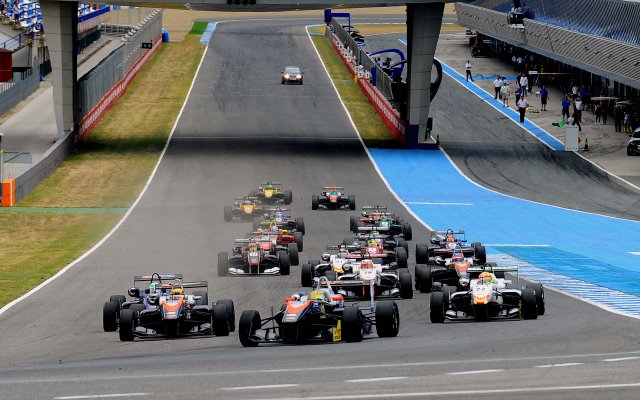 Euroformula Open title favourite Sandy Stuvik moved back to the head of the standings with a double victory at Jerez. He led every lap of race one from pole, and inherited the race two win when his RP Motorsport team-mate and chief rival Artur Janosz was handed a drive-through penalty.

Janosz, who had finished second in race one, went on to retire from race two after contact. Stuvik has therefore opened up a 31-point lead in the championship race.

Alex Palou continued the impressive start to his single-seater career with a fourth and a second, putting him just six points behind Janosz. Yarin Stern recovered from a tough start to his campaign with third place in both races, elevating him up to sixth in the standings. Fourth and fifth are Cameron Twynham and Yu Kanamaru, who both had mixed weekends. A lack of pace left Twynham a lowly 11th in race one before bouncing back to fifth in race two, while Kanamaru was sixth and then 12th. 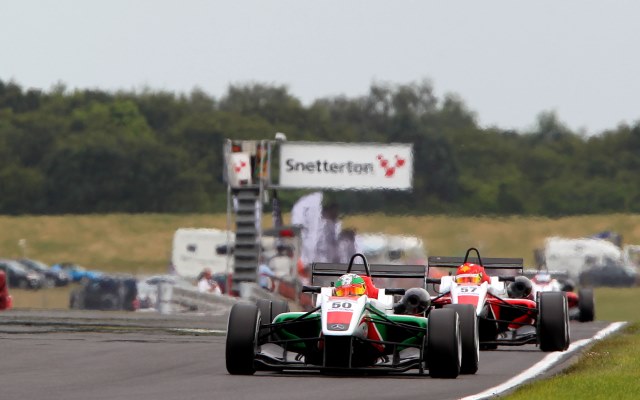 Sam MacLeod returned to the British F3 fold for round three at Snetterton and took another two race wins to move within seven points of the championship lead. After missing round two at Silverstone, MacLeod won race one at Snetterton from pole. He was in the hunt for the win in the reverse-grid race two, but made contact with leader Camren Kaminsky, leaving him second. In race three he dropped from pole to fifth at the start, but fought back to win. Although he is close to the points lead, MacLeod has reiterated that his focus remains on German F3.

In race one, championship leader Martin Cao took his seventh second-place from as many races, but a mechanical problem stopped him while running second in race two and he then collided with Fortec team-mate Matt Rao fighting over the lead in race three. Rao still had a good weekend, with third in races one and three and the win in race two. He’s just three points behind MacLeod, and ten behind fellow full-time driver Cao.

BRDC F4: Two wins for Palmer, one for Maini at Snetterton 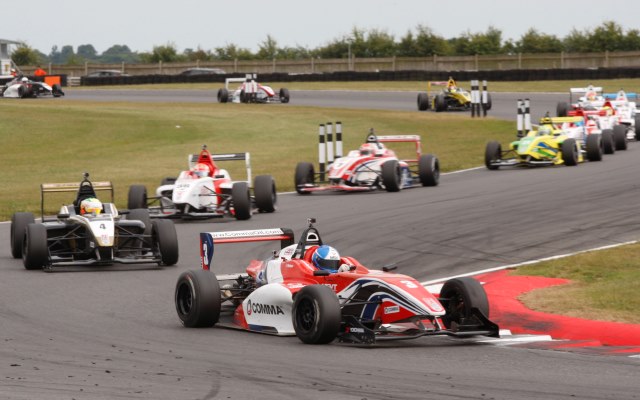 While his older brother had a relatively quiet weekend in GP2 in Austria, Will Palmer enjoyed by far the strongest performance of his single-seater career yet as he took his first two main series BRDC F4 wins at Snetterton. He went from third to first in the opening stages in race one, while he led race three from pole to finish. Fifth in race two, Palmer has moved up to third in the standings, only ten points from second.

George Russell had a quiet weekend with no wins, but maintained his 21-point advantage in the championship over Raoul Hyman. Russell had claimed pole for the first race, but found himself relegated down to third by Palmer and Hyman. He was third again in race two, and sixth in race three. Hyman finished second, fourth and third in the three races, but had his race two result penalised for a dangerous move, dropping him to 13th and preventing him from making any headway into Russell’s advantage.

Arjun Maini capped his impressive start to the season with a maiden win of his own in race two from the reverse grid pole position, after finishing eighth in race one. He was fourth in race three, behind the HHC trio of Palmer, Sennan Fielding and Hyman.

Ex-Formula BMW Talent Cup driver Michael Waldherr finished second to Parsons in each of the first three races, and fourth in the last. Plu Komarakul was third in each race, with Malaysian Daniel Woodroof taking second in Waldherr’s absence in race four.

Who else? Verstappen had shown impressive pace so far in his rookie campaign but had struggled to convert that into many results. He put that right in some style at Spa, harnessing his aggressive style to put Esteban Ocon firmly in the shade. 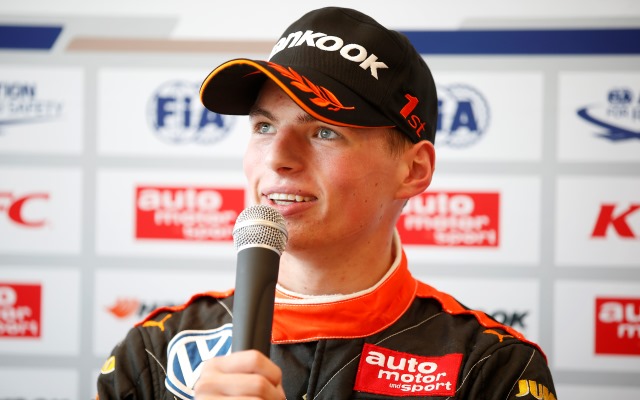