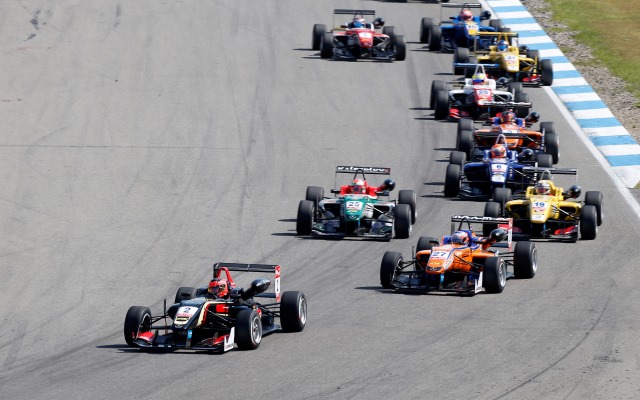 Rookie Esteban Ocon extended his lead in the FIA F3 European Championship after round two at Hockenheim as he collected his second win of the campaign in the second race of the weekend. The Lotus F1 junior fell from third to ninth on the last lap of race one due to a fuel issue, but rebounded to finish first and second in the two Sunday races and extend his points lead from six to 36 as his chief rivals all hit even worse trouble.

Prema team-mate Antonio Fuoco failed to score in either of the first two races – only managing 11th in race one after a traffic-induced qualifying nightmare and then retiring from race two after early contact. He picked up third in the final race to limit the damage, retaining second place in the standings.

Tom Blomqvist had a frustrating weekend. After a fourth in race one, he took a commanding double pole for the remaining races, only to be hit by a ten-place grid penalty for the next three races for an engine change. He charged from 11th to fifth in race two, but his race three was ended by contact from behind on lap one.

Lucas Auer claimed victory from pole in race one as Mucke bounced back from a struggle at Silverstone. The Austrian wasn’t quite as quick for the rest of the weekend, but still took a pair of fourth places to bring him close to the tied Fuoco and Blomqvist in the standings. After another case of race one first-lap damage, karting graduate Max Verstappen was rewarded for his outright pace with two poles after Blomqvist’s heavy penalty. A broken gearbox on his way to the grid stopped him taking part in race two, but he delivered his first win in a proper single-seater series in race three.

F3 Open champion Ed Jones impressed with a pair of podiums in races one and two, joined on the rostrum by Carlin team-mates Jordan King and?Antonio Giovinazzi respectively. 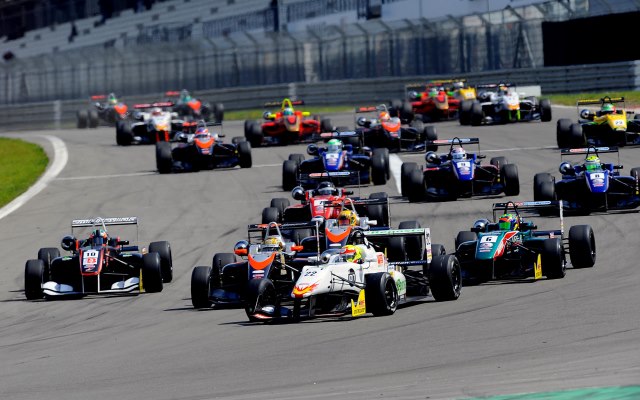 Verstappen wasn’t the only karting graduate to win an F3 race in Germany last weekend. His 2013 CRG karting team-mate Alex Palou claimed pole position and a commanding win in the opening race of the renamed Euroformula Open at the Nurburgring. The latest protege of Fernando Alonso’s former manager Adrian Campos, the 17-year-old Spaniard was essentially having his first race in a single-seater (other than the Winter Series ‘test race’ at Paul Ricard in March). He briefly led race two into the first corner after starting sixth but ran too deep, dropping to third. He later regained second, but retired with a broken throttle.

Palou beat the returning 2013 runner-up Sandy Stuvik in order to win on Saturday. Stuvik qualified on pole for race two, and although he briefly lost the lead, he went on to win by ten seconds and claim a 14-point lead in the standings.

RP Motorsport team-mate Artur Janosz finished the races in fourth and second to claim P2 in the standings ahead of Palou. Formula Renault 2.0 convert Yu Kanamaru finished third in race one, with Copa Class graduate Cameron Twynham completing the podium in race two, having finished sixth in race one despite a clutch problem. 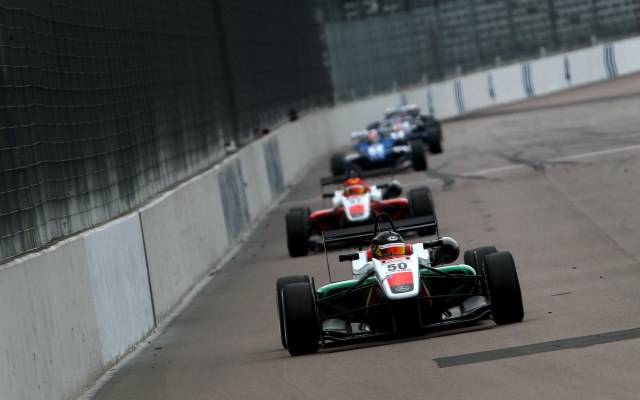 Just seven cars were present for the opening round of British F3 at Rockingham, and with the quality debatable, it was non-full-time entry Sam MacLeod who dominated proceedings. MacLeod, who has a single season of cars in Protyre Formula Renault under his belt and has chosen to concentrate on the slightly better supported German F3 series this year, won race one with ease from pole and then went from fourth to first at the start of race two on his way to another straightforward win.

A poor start in race three opened the door for Fortec team-mate Matt Rao, and MacLeod then made contact with Rao at the first braking point, ending his own race immediately. Rao was able to continue, winning by a more dominant margin than MacLeod had earlier enjoyed. Rao came within 0.002 seconds of MacLeod in qualifying, but retired from race one in a crash and could only come back to fourth in race two.

Thus, it was Martin Cao who scored the most points over the weekend with a consistent run of three points. The third of Fortec’s Protyre graduates lacked the same pace as MacLeod as Rao to fight them for wins, but was at least able to keep his car on the road and away from his opponents. Macau karting graduate Andy Chang did well to claim a pair of third places for Double R, with the remaining podium spot going to last minute Carlin recruit Alice Powell, who had to come from the back after missing qualifying due to a try-out in skeleton for Team GB. There’s a sign there somewhere about the state of the respective disciplines in the UK… 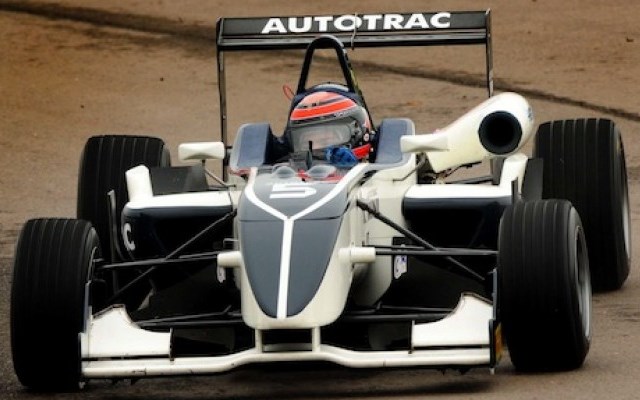 Pedro Piquet continues to run away to the F3 Brazil title after another two wins in Brasilia. The 15-year-old won race one from pole position by nearly 17 seconds, and then won race two by 20 seconds despite having to come from sixth on the reverse grid, taking the lead on lap 13 of 35.

After a difficult start to the season, ex-Formula Abarth racer Lukas Moraes enjoyed a better time at round three. He was the only driver within a second of Piquet in qualifying, and then finished second and third in the two races. Bruno Etman remains second in the A class points to Piquet despite only finishing fourth in race one and then stopping a lap from the end of race two, having led the early stages.

Vitor Baptista, who denied Piquet victory in race two at Santa Cruz, kept up his 100 per cent class B record, finishing the races in fifth and second overall. 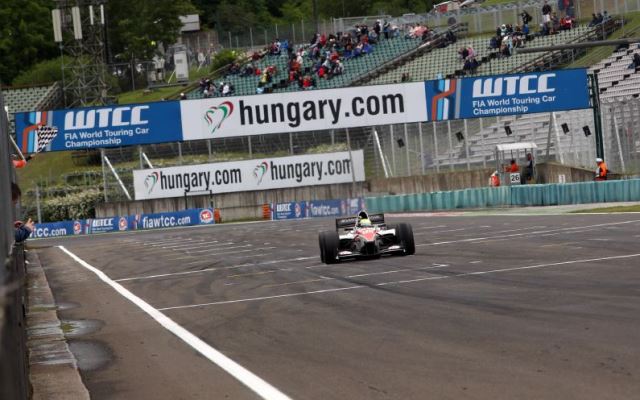 Kimiya Sato claimed a double victory in Auto GP at the Hungaroring to extend his points lead, despite having to come from ninth and eighth on the grid in the two races. Caught out by rain early in qualifying, Sato had only qualified ninth but used a good start, strong pace and a late pitstop strategy to claim victory in race one. Starting eighth on the reverse grid for race two, the Japanese driver pulled a repeat with another good start and late stop. He now leads the standings by 39 points, but does have a clash between his GP2 and Auto GP programmes in July.

Sato’s speed denied Tamas Pal Kiss a home win in race one. The Zele driver could only manage seventh on Sunday, but sits second in the standings. Markus Pommer had a tough pair of races after topping qualifying, struggling to ninth in race one after radio and car problems and managing sixth in race two.

Kevin Giovesi completed the podium in race one, while 2013 champion Vittorio Ghirelli returned from his Indy Lights campaign with Super Nova and finished second to Sato on Sunday after starting from reverse grid pole. Sam Dejonghe was third in race two. 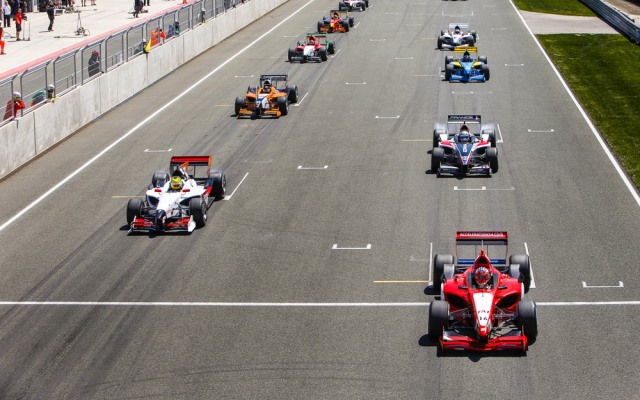 One week on from?Mirko Bortolotti dominating the first FA1 round at Portimao,?Nigel Melker claimed a double victory over the Spanish border in Navarra. The Dutchman won race one from pole position by 11 seconds.

He was only second on the road in race two, but Bortolotti was handed a ten-second penalty after his team allowed a wheel to roll down pit lane during his stop. That forced the Italian to settle for a second P2 result. The pair have now both got two wins and two second-places to their name, but Bortolotti has a two point advantage in the unofficial standings due to an extra pole position.

Richard Gonda and Sebastian Balthasar completed the podium in the respective races. 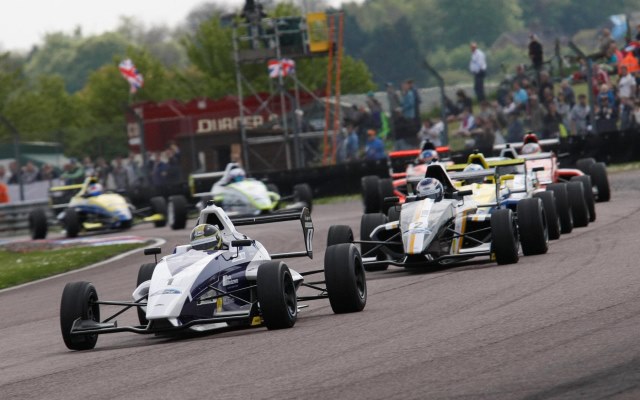 Sam Brabham finally grabbed his first single-seater race win in the opening Formula Ford GB race of the Thruxton weekend, and then doubled his tally in race three. Making up for crashing out of the lead last time out at Donington, the third generation racer claimed a double pole in qualifying at the high-speed track and was able to hold the lead through both of those races. He started and finished fifth in the reverse grid race two.

With Brabham still playing catchup in the standings after two earlier non-scores, the title fight swung back and forth between Jayde Kruger and Harrison Scott at Thruxton. Kruger led coming into the meeting after four wins from six races, but was forced to retire after contact from Chris Mealin that sent the latter into the barriers at high speed. Kruger recovered to finish sixth and second in the remaining races.

Scott finished second and third in the first two races to move into an eight-point championship lead and was running third again in the final race until he spun trying to avoid and lap a slow-moving backmarker exiting the chicane, dropping him to seventh. That put Kruger back into a three point lead. Juan Rosso scored his first win of the season in race two, while Ashley Sutton impressed on his return to the series with a new team Jamun after skipping Donington and the Thruxton test, finishing the races in third, fourth and third. 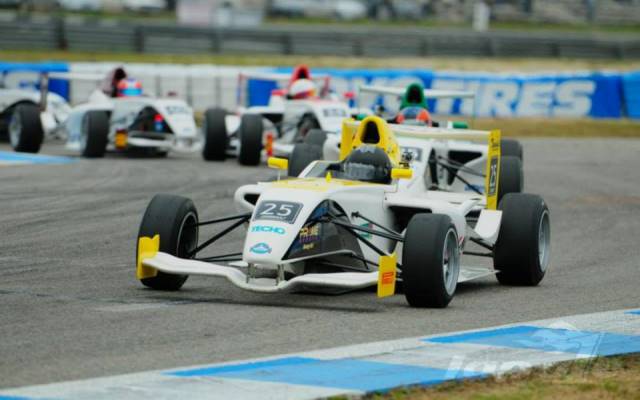 Felipe Ortiz scored his second straight win in F4 Sudamericana at round two at El Pinar in Uruguay, but ended the weekend having lost the points lead. The 15-year-old Brazilian led race one from start to finish, but retired on the first lap of race two after a collision with Enzo Bortoleto, who was third in race one.

Series debutant Juan Manuel Casella?claimed victory in race two to add to his fourth in race one, benefiting from?Frederick Balbi taking himself out of the race when he made a bit to pass?Bruno Baptista for the lead. Baptista’s car was damaged, leading to him settling for a second runner-up spot of the weekend. That was enough for him to move into a seven-point led over Ortiz.

It’s easy to criticise the quality of the Euroformula Open field but, on a weekend where 2013 champion Ed Jones took two FIA F3 podiums at Hockenheim, for single-seater rookie Palou to beat last year’s runner-up Sandy Stuvik in the first race of the season was a fine achievement. That he didn’t finish second on Sunday to tie for the points lead wasn’t his fault. 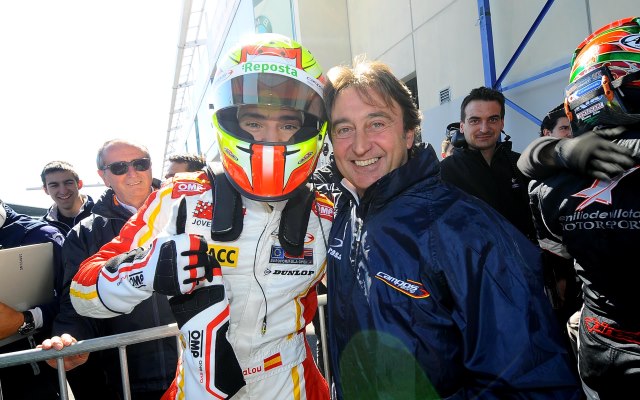