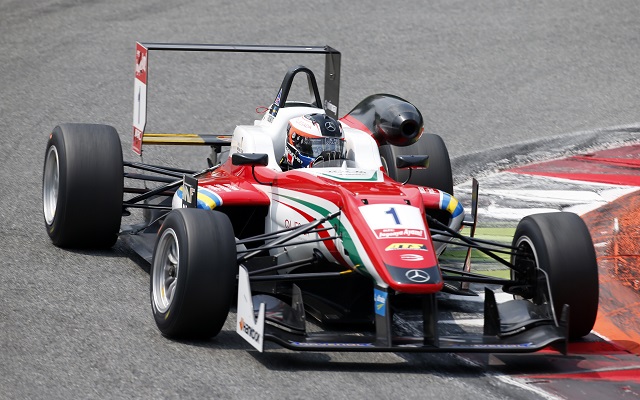 Felix Rosenqvist collected his second FIA F3 European Championship win of the day at Monza, staying out front in a race two full of incident that was eventually red-flagged.

Cars rolled in two separate collisions. The most significant was when Lance Stroll performed a frightening somersault at Curva Grande early in the race.

The Canadian was defending fifth place from Antonio Giovinazzi on the run out of the first chicane. With the championship leader up against the grass on the left of the track, his front-right tyre made contact with Stroll’s rear-left.

The Italian F4 champion was sent pirouetting towards the barriers and was fortunate not to clear them before coming to rest on his remaining wheels in the gravel. Fortunately, he was soon out of the car and walking around.

That had triggered the second safety car period of the race. The first had come when second-place starter Charles Leclerc was forced to retire with front-left suspension damage after contact with Jake Dennis at the first chicane, as Rosenqvist held the lead from pole position.

The third safety car was required after Michele Beretta made contact with another car under braking for the first chicane, sending him left into the barriers and then rolling down the track.

The incident was only picked up by the television cameras when he came sliding into the back of shot as Mucke team-mate Maximilian Gunther spun after bouncing over the kerbs in an attempt to defend position.

There were six minutes left at the restart but the race was called for good when Matt Rao ran into Alessio Lorandi under braking into turn one.

Rosenqvist was thus the winner after staying out of reach of team-mate Dennis. With Giovinazzi and Leclerc both failing to score for the first time this season, Rosenqvist has moved to 16 points behind the Italian and one ahead of the Monegasque racer.

Mikkel Jensen made the podium for the second time in a day ahead of his Mucke team-mate Santino Ferrucci.

Gustavo Menezes had been fifth until running wide through the gravel under pressure from Brandon Maisano and George Russell, dropping him down the order. Markus Pommer, Pietro Fittipaldi, Raoul Hyman and Sam MacLeod completed the top 10.

UPDATE: The results have been taken a lap earlier, giving Menezes fifth place back ahead of Russell, Maisano, Pommer, Fittipaldi and Hyman. Only half points have been awarded, meaning Rosenqvist is now 28.5 points behind Giovinazzi and 11.5 behind Leclerc.

Ilmari Korpivaara wins at Anderstorp from fifth on the grid