Ilmari Korpivaara wins at Anderstorp from fifth on the grid 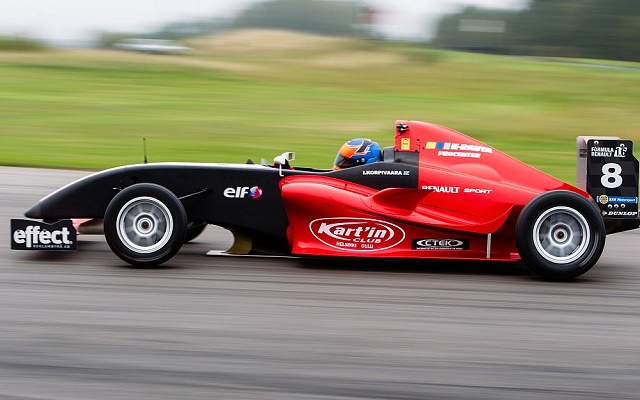 FinnDrive’s Ilmari Korpivaara closed in on championship leader Oliver Soderstrom by taking the win in the third Formula Renault 1.6 Nordic race of the season at Anderstorp.

Korpivaara started fifth, but mastered the wet conditions to charge to the front and take the checkered flag.

Poleman Laurents Horr kept the lead on the opening lead, while second-placed Linus Lundqvist slipped down the order, allowing Soderstrom and Korpivaara to move up to third and fourth respectively.

Soderstrom then passed Robert Svensson for P2 on the second lap and then worked his way around Horr for the lead two laps later.

But Korpivaara did not allow the Swede to escape out front, passing both Horr and Svensson in one lap and then quickly erasing Soderstrom’s two-second lead.

Despite his pace, the Finn took until the final lap to pass Soderstrom, but eventually managed to secure his first win in the category.

Horr came close to taking second off the Swede, but eventually had to do with third, as Svensson brought up the top four a second behind.

Rasmus Ericsson and debutant Julia Holgersson did not make the finish.