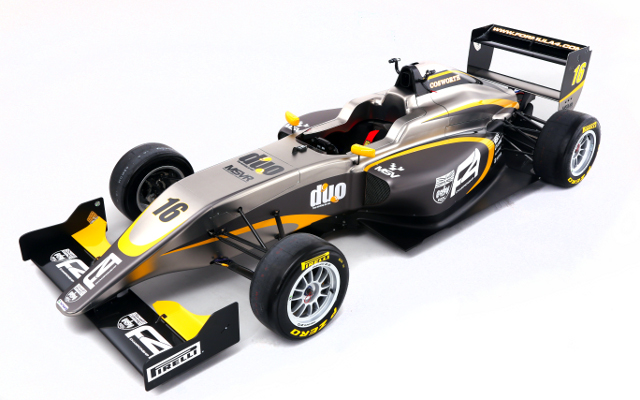 The BRDC Formula 4 Championship has unveiled the car that it will introduce later this year, including a more powerful engine as the series looks to position itself further up the ladder.

As announced last September, the MSV-run championship will utilise the car built by Tatuus for the Italian and German FIA-specification F4 categories.

However, rather than fully complying with FIA’s concept – which include restricted power in order for 15-year-olds to compete – the series has instead settled upon an enhanced version of the Tatuus car.

Key to this is a new Cosworth four-cylinder normally aspirated engine, producing 230bhp instead of the 185bhp of the Ford Duratec unit used in the first generation car used since the championship’s first season in 2013.

This added power will be combined with increased downforce from an upgraded aerodynamic package on the Tatuus car, leading to lap times that it is estimated will be “around four seconds faster on a typical circuit.”

The new car will be used for the first time in the Autumn Trophy (formerly Winter Championship) this November before being adopted for the main championship in 2016.

While acknowledging the success of FIA F4, series chief Jonathan Palmer said his new car would “fill an obvious gap in the international single-seater career ladder.

?New BRDC F4 will be the perfect stepping stone for drivers wishing to progress from the various national FIA F4 series, but who are either unable to secure a F3 or GP3 budget or simply wish to gain more experience in a car much closer to F3 at a fraction of the cost.

“FIA F4 has been a considerable success, but the limitations imposed by permitting 15-year-olds to race, including just 160bhp, do mean that many drivers will wish to progress to a higher performance car as soon as they are able to, at 16-years-old.

“On the other hand there will be many young drivers who will feel able to make the jump straight to a 230bhp single-seater directly from karts, which they will continue to race at 15-years-old.”

Palmer explained that the technical regulations for the new car will help to prepare drivers for F3 and GP3.

Representatives from Tatuus were present at the car’s launch at the Silverstone race weekend on Saturday, and the Italian firm’s technical director Artico Sandona commented: ?It?s an excellent demonstration of how the foundation-level FIA F4 car can be developed and evolved for race series operating at a higher performance level.”

MSV has sold 24 cars from the initial order of 26 to existing BRDC F4 teams.

The 2015 Autumn Trophy will contest of eight races, split between Snetterton on 7/8 November and the Brands Hatch Indy circuit a week later.

Sasahara continues to shine with Eurocup FR2.0 pole at Spa