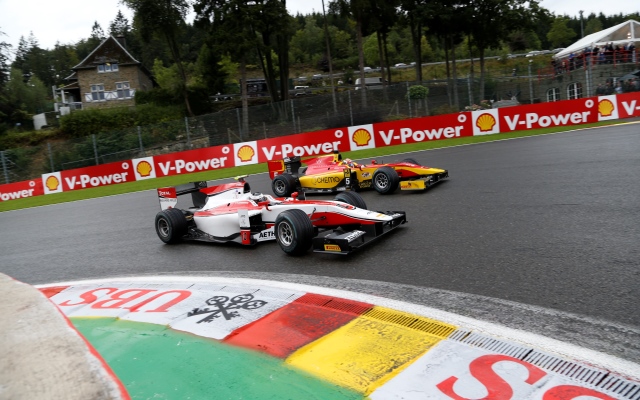 Raffaele Marciello claimed a breakthrough first win in GP2 at Spa-Francorchamps after defeating local star Stoffel Vandoorne in a thrilling fight for the victory between the two. Pole-sitter Vandoorne led most of the race in wet conditions but was pushed by a charging Marciello, who was close enough to pass in the closing stages. The McLaren junior put up a superb defence to his Ferrari-backed rival but eventually succumbed to the Italian’s stronger pace on fresh tyres. The rookie pair had demonstrated their class, finishing 35 seconds clear of the rest. Marciello would spin on lap one of the sprint race, before fighting back to 14th. Vandoorne made up one spot to sixth.

Felipe Nasr turned the tables on championship leader Jolyon Palmer in a reversal of roles from the last round in Hungary. Nasr qualified a lowly 11th with Palmer second, but on the opening lap of the feature race, Nasr was past his rival with an aggressive move. Taking the restart after a weather-induced red flag from fifth, he gained one place to finish fourth. In the sprint, Nasr made a superb start to go from fifth to first at the opening corner, absorbed pressure from behind and then pulled away at the end as he took his fourth win of the season.

Palmer labelled his weekend as disappointing, but a sixth and a third kept up his record of finishing every race in 2014 inside the top seven. His standings lead has come down from 43 to 32 points with three weekends remaining.

Johnny Cecotto was another of the weekend’s stars. He took the lead of the first race at the restart, but conceded the lead soon afterwards after an off-track moment and would finish a distant third. In the sprint race he fought his way up to second and got close to challenging Nasr, although the Brazilian had enough in hand in the end. Mitch Evans took a fifth and a fourth, but could have had more had his car not gone into safety mode while running second behind the safety car early in the first race. 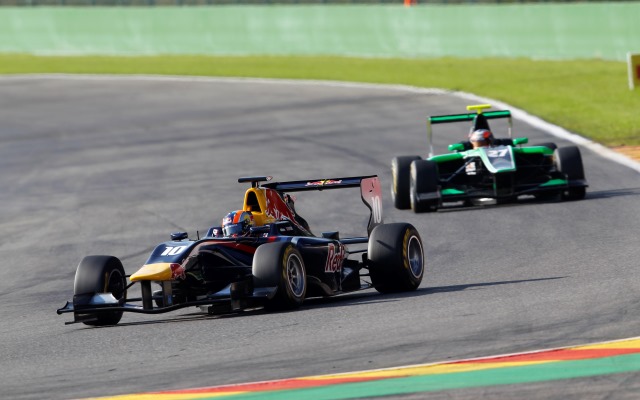 There was another duel between two of the star drivers in GP3, but this one had to wait until Sunday. An incorrect choice of wet weather tyres forced Alex Lynn and Richie Stanaway to pit for slicks at the end of the formation lap, but the pair recovered to finish eighth and seventh respectively, putting them on the front row for race two. Lynn led from pole but an error at Les Combes briefly allowed Stanaway to pass him – only for Lynn to reclaim the lead two corners later. It meant the Briton’s points lead over his rival increased from 31 to 32 points over the course of the weekend.

In race one, the leading drivers played it safe on wet tyres and others further back gambled on slicks. It was a decision that would prove to be correct, but the first three slick-shod drivers all threw their chances away – Marvin Kirchhofer with a formation lap shunt, Patric Niederhauser with an equally embarrassing turn one collision and Matheo Tuscher spinning once on course for his first win.

From 11th on the grid, Dean Stoneman kept his call to win ahead of fellow Britons Dino Zamparelli and Nick Yelloly as all three recovered from poor qualifying showings. Fifth for Yelloly in race two moved him up to third in the standings, ahead of Emil Bernstorff – who just missed out on reverse grid pole to team-mate Lynn, forcing him to settle for a ninth and a sixth. Jimmy Eriksson joined Kirchhofer as a double non-scorer after being taken out by Niederhauser, although the Swede was another on the wrong tyres.

Alex Fontana finally got his first points this year with sixth in race one followed by a podium spot in third in race two, while Jann Mardenborough was twice fourth, stretching his points-scoring run to six races. 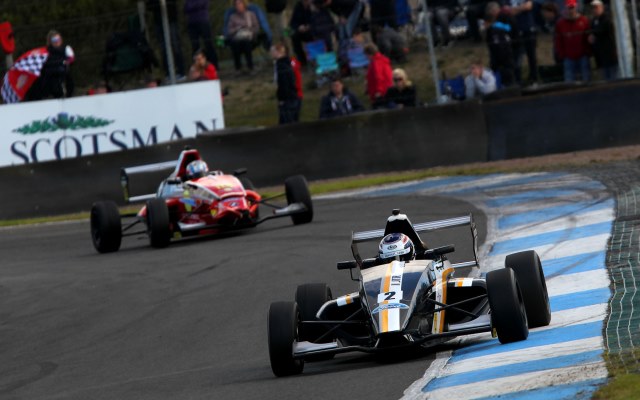 Jayde Kruger closed the gap to Formula Ford GB leader Harrison Scott with victories in races two and three at Knockhill in Scotland. The South African had only been fourth in race one, but ended a seven-race win drought from the front row in race two and then from pole in race three, cutting the gap to Scott from 19 to six points.

Kruger was helped a little in race three after Ashley Sutton crashed heavily out of second at the very last corner of race two. The MBM driver and form man took his third straight win from pole in race one, and then put Kruger under intense pressure for most of race two before a stuck throttle saw him speed into the tyre barrier at the hairpin. Fortunately, he was able to escape without injury and take part in race three, but a change to the team’s spare second car saw him relegated from pole to the back of the grid – from which he recovered to fifth.

Scott was the closest man to Sutton in race one to extend his lead, and took two thirds in the remaining races. Back from his British F3 debut, Max Marshall was fifth in race one before beating Scott to second in races two and third. Ricky Collard enjoyed a strong weekend, completing the podium in race one, taking fourth in race two and then sixth in race three.

Formula Renault 1.6 Nordic: Fourth win for Lappalainen and a first for Aabol 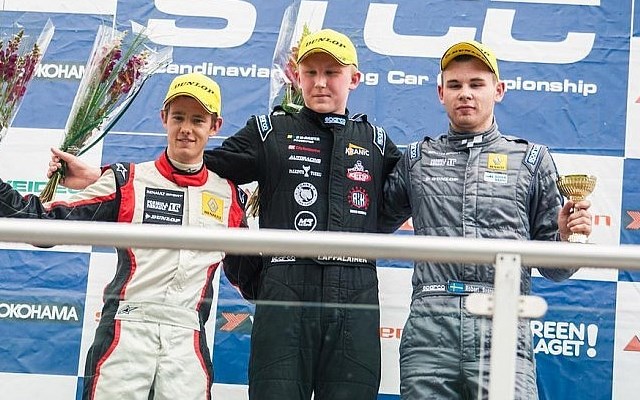 Formula Renault 1.6 Nordic leader Joonas Lappalainen scored his fourth win of the season in race one at Knutstorp, leading from pole and managing to hold off Kevin Aabol. Third in race two leaves Finnish driver Lappalainen with a 43-point lead with four races remaining.

Aabol went one better in race two to secure his first win and has now moved up to third in the standings. Lappalainen’s nearest challenger Lukas Sundahl was only fourth in race one, but stopped his rival escaping too far ahead by beating him to second place in race two. Robert Svensson?completed the podium in race one and then took fourth in race two. 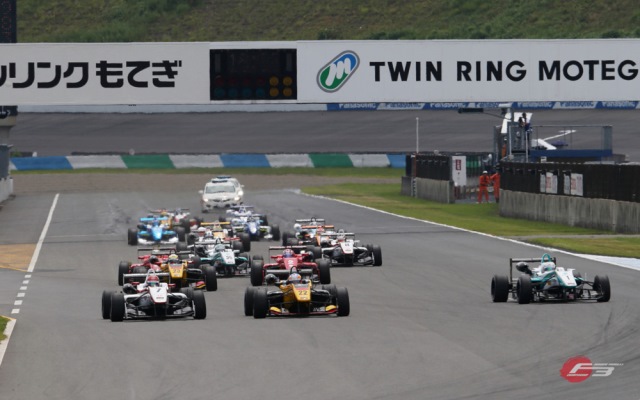 Nobuharu Matsushita moved back into a narrow lead of the Japanese F3 title race when the series returned for two more races at Motegi. The Honda-backed driver was fourth in race one and then second in race two, putting him three-points clear of erstwhile leader Kenta Yamashita. The TOM’S driver took third in race one, but could only manage sixth in the second race

That has dropped the 19-year-old to third in the standings, with Mitsunori Takaboshi‘s race two victory moving him up to second, just one point behind Matushita. The Nissan-supported driver was second in race one before taking his third win of the season. Yamashita’s team-mate and 2013 runner-up Takamoto Katsuta finally scored his first win of the campaign in race one, and added a third place in race two.

British and German series winner Sam MacLeod made a guest appearance for Toda Racing but retired from race one with technical problems before coming home seventh in race two.

After Hungary, there were plenty of doubts of Nasr’s title credentials, and those hardly disappeared when he qualified just 11th when Palmer was second. But he went into an aggressive mindset for the races, and used this to fight his way up the order in the difficult conditions at the start of the race and get ahead of his rival. He then made a perfect start on Sunday and managed his lead brilliantly, upping his speed late on to show he was always in control. Marciello and Vandoorne were in a class of their own on Saturday, but didn’t make enough of an impact on Sunday. 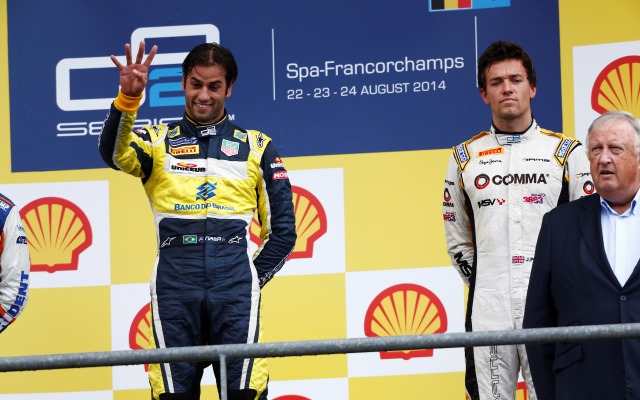 Hughes to race for ART and Strakka in remainder of 2014