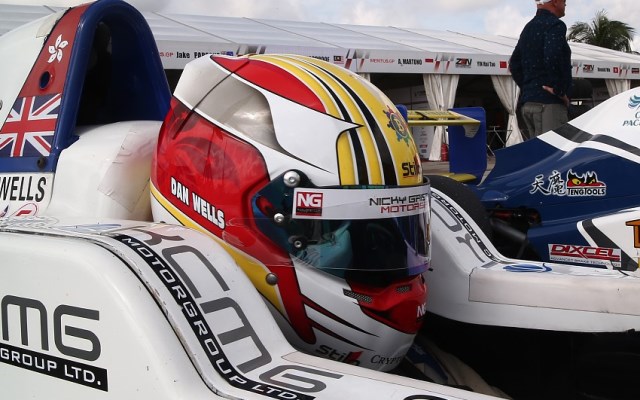 Dan Wells will make his F3 race debut in the British series round at Brands Hatch this weekend.

Wells will drive Double R Racing’s second car, driven by Max Marshall at Thruxton and by Andy Chang before that. Camren Kaminsky continues in the squad’s other Dallara F312.

The 23-year-old British driver has been based in Hong Kong since 2012, when he finished runner-up in Formula Pilota China. His 2013 season was limited by a lack of funds, aside from a second-place in the renamed Formula Masters China at the Macau Grand Prix, but he returned to the series full-time in 2014, and currently sits third in the standings.

He previously contested his first full single-seater campaign in Formula Renault UK in 2011, and finished second behind Oliver Rowland and ahead of Daniil Kvyat in the six-race winter series at the end of the year.

?I?m looking forward to my debut F3 race and it?s great for it to be on the Brands Hatch Grand Prix Circuit too,? said Wells.

?I went to the 2009 British F3 races there as a guest of Double R before I had started my racing career, so it?s a happy coincidence that I will make my F3 debut with the team now. There is limited practice time, but I’m looking forward to a productive weekend.?

Team principal Anthony ?Boyo? Hieatt said: ?We?re delighted to be able to give Dan his Formula 3 debut at Brands, he?s a driver we?ve known since he started out in racing and has had a lot of success in Asia since he moved there three years ago. It?s going to be a big step up into the F3 car for the first time in a racing environment, but we?re confident he?ll do a very good job.?