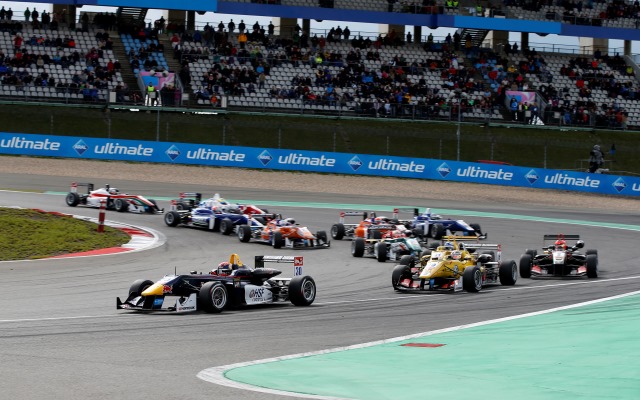 Max Verstappen enjoyed an impressive first weekend as a Red Bull Junior in the FIA F3 European Championship at the Nurbrgring. After outclassing the field in a wet qualifying session, he claimed his eighth win of the campaign in race one despite twice losing the lead on a drying track. In race two he took the lead off the start and soaked up the pressure of having four drivers behind him, until he suffered an engine failure just laps from the end. Faced with the first of three grid ten-place grid penalties in race three, he dodged first corner carnage on his way from 12th to third.

Antonio Giovinazzi showed his Spielberg form was no fluke, inheriting his second victory in the space of three races in race two of the weekend, after coming third in the first race. His race three ended in turn one contact with Esteban Ocon. The Frenchman improved on his failure to score in Spielberg, but was only sixth in race one and needed Verstappen’s misfortune to make the podium in race two. His championship lead has been cut to 77 points, but he will wrap up the title next time out in Imola if he maintains a lead of over 75.

Lucas Auer scored his first win for 23 races in the final encounter, and after a seventh and a fifth in the earlier races, is still in mathematical title contention. Closer than him is Tom Blomqvist, who after a fifth in race one, started both of Sunday’s races from pole. A poor start left him second to team-mate Giovinazzi in race two, while he was passed at a restart by Auer in race three. Though his haul could have been larger, he has closed to within 87 points of Ocon.

Antonio Fuoco stole the lead from Verstappen at the start of race one despite starting fifth, but a mistake cost him the lead and forced the Ferrari driver to settle for second. He added two fourth places in Sunday’s races. Spike Goddard also led that first race after starting on wets, but he dropped back again once the track had dried out. 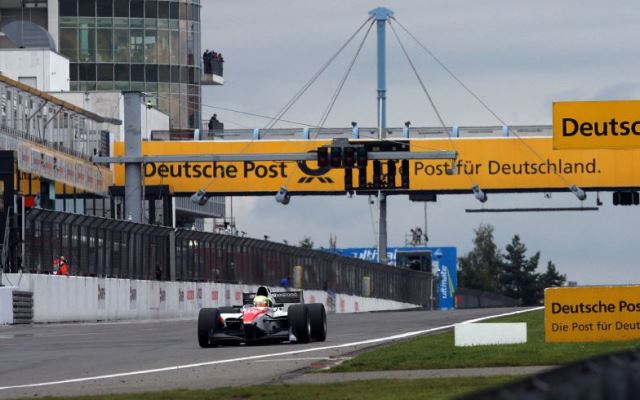 Tamas Pal Kiss twice took the chequered flag first in the penultimate round of the Auto GP season at the Nurburgring, but his efforts would not be enough to prevent Kimiya Sato from wrapping up the series title. Kiss initially appeared to have taken victory in race one after the other top drivers had all been handed drive-through penalties for setting personal best sectors under a yellow flag on lap two.

However, the Hungarian was given a similar sanction post-race, dropping him to fourth and handing the win to Sato, who had come from the back of the grid after crashing in qualifying, despite being one of those to be penalised. Kiss did manage to seal a victory for good in race two, but third for Sato and the fastest lap was enough to give the Japanese driver a 51-point lead, therefore putting him out of reach with one weekend remaining and only 49 points available. Sato has only contested six of the seven rounds so far this campaign.

Markus Pommer scored his fourth pole of the season on home soil, but would have to make do with third and second in the two races. Kevin Giovesi was second in race one and sixth in race two.

British F3: Two for Cao, one for Rao 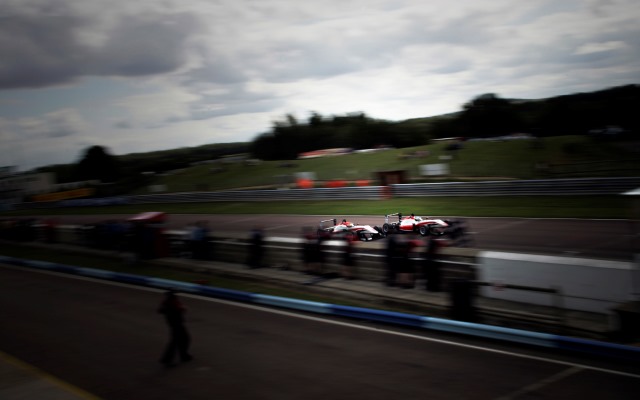 Martin Cao and Matt Rao continued their scrap for the British F3 title at Thruxton amidst a new-low grid of just five cars, with the Fortec duo locking out the top two positions in each race. Chinese driver Cao took his first two wins in the series the opening races, with Rao settling for second.

Rao got the better of his rival in the final race of the weekend, which was enough for him to leave Thruxton with a four-point lead in the standings with two rounds remaining.

With Sam MacLeod opting to focus on an appearance in Japanese F3 next weekend and Andy Chang switching to the European championship, Peter Li completed the podium in the first two races, while Camren Kaminsky finally grabbed his first rostrum appearance in race three. Formula Ford racer Max Marshall replaced Chang alongside Kaminsky at Double R and took a trio of fourths. 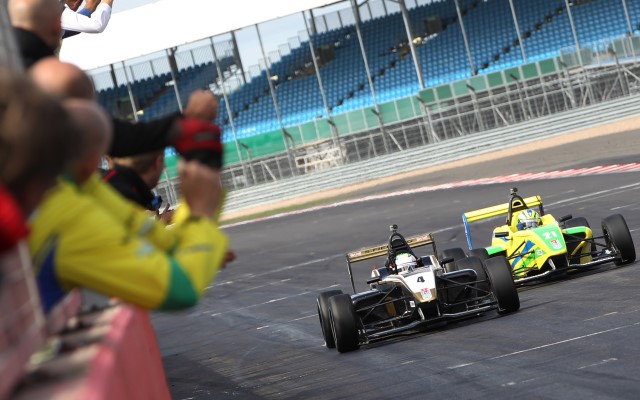 Sennan Fielding claimed his maiden BRDC F4 Championship win as the series returned to Silverstone for round five, and proceeded to add two more victories as he became the first driver to ever net a treble win in the category. None of his wins came easy, with the winning margin being less than half a second on each occasion as he was forced to defend a late attack from behind. While he led the first and third races from pole, the second saw him charge from eighth on the reverse grid after gambling correctly on slicks on a drying track. He’s moved up to third in the standings, just 29 points off the lead.

George Russell retained the championship lead, despite only managing a fifth and two sixths, complaining of a mysterious handling issue at a circuit where he won twice on his debut in April. In the opening two races he came out on top of battles with chief rival Raoul Hyman, but the South African finished a close second to Fielding in race three, enabling him to close to within 11 points of Russell with three rounds remaining.

Struan Moore twice joined Fielding on the podium, following him across the line for second in race one and taking third in race three. It was Brazilian rookie Gaetano Di Mauro who pushed Fielding home in race two, while Arjun Maini and Will Palmer completed the podium in races one and two respectively, the latter coming from 20th on the grid on slicks after a race one retirement. Euroformula Open star Alex Palou showed pace on his debut for usual team-mate Sean Walkinshaw’s team, claiming a fourth and a fifth from the two main races. 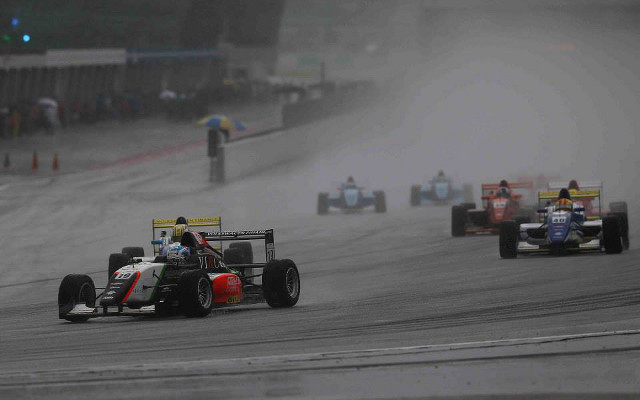 Matt Solomon closed on Formula Masters China Series leader James Munro as he added his third and fourth consecutive wins at Sepang. The Hong Kong driver beat his New Zealand rival in the wet opening race and the dry second encounter. Solomon then finished second in race three, with Munro only fourth. Munro, who began the year with six straight wins, is now 14 points ahead in the standings with two rounds remaining.

Jake Parsons impressed on his debut in the series, having previously won four from four in the AsiaCup opener at the same circuit. He claimed pole for the opening race but spun off, dropping him to fourth. He took third in race two, before overhauling Solomon to win the final race.

Dan Wells completed the podium in races one and three, but was unable to start race two due to a wishbone failure. ADAC Formel Masters regular Philip Hamprecht scored a best result of fifth on his maiden appearance. 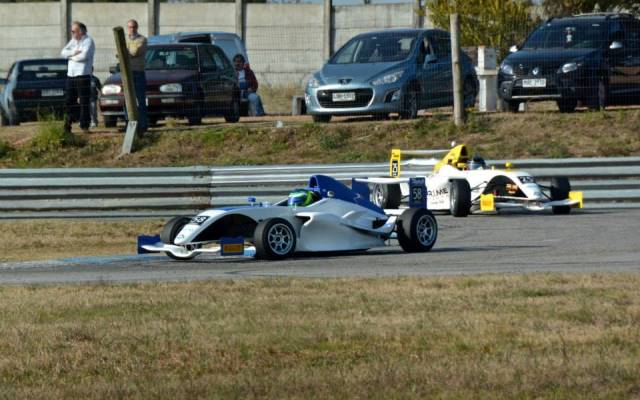 Experienced Argentinian driver Martin Ponte turned up to F4 Sudamericana’s return to El Pinar for round three and won both races. Points leader Bruno Baptista was third in the opening race and then second in race two, increasing his lead over fellow Brazilian Felipe Ortiz, who had to make do with a fourth and a third.

Uruguayan driver Miguel Wholer finished a close second to fellow debutant Ponte in race one, but finished sixth and last in race two, a lap down after an early incident.

Manuel Mallo claimed his first two wins in Formula Renault Argentina at the Resistencia round. Starting from pole, he won the first by a narrow margin from Martin Moggia, and won the second also by less than half a second, this time in front of Guillermo Rey.

Championship leader Federico Cavagnero retired from race one, but finished third in race two to give him a 13-point lead over Mallo, who is up to second with Rey a further five back in third. Miguel Calamari and Felipe Schmauk have dropped to fourth and fifth after both failing to finish race two following top five finishes in race one.

F3 Cup leader Toby Sowery had to make do with two second places at Brands Hatch behind experienced campaigner Tristan Cliffe. Car racing rookie Sowery twice took the lead off the start ahead of pole-sitter Cliffe, but lacked the same pace as the 33-year-old, who took his first two wins of the season. Lanan driver Sowery still has a 51-point lead over Cliffe in the standings, with two rounds remaining.

Up to now, Fielding had been a frontrunner in BRDC F4 without being able to get a win, but he finally made that breakthrough in style at Silverstone. His speed wasn’t dominant, but he had to out-race a rival in a last-lap tussle on every occasion, managing to survive under pressure. If he can keep up something close to that form and be a consistent frontrunner, he could be a real threat in the title run-in. 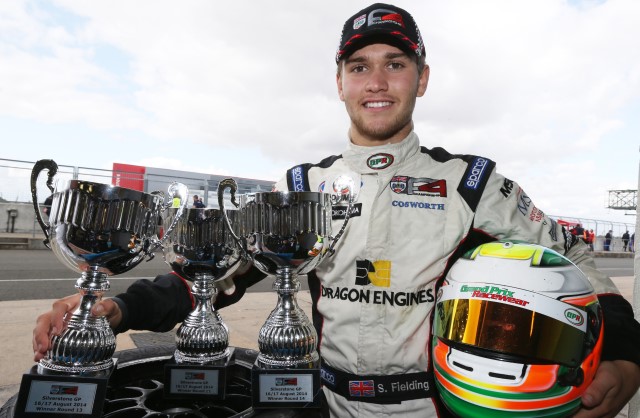