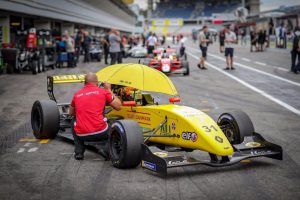 Christian Lundgaard bounced back from a disappointing opening day at Hockenheim to claim pole for the second Formula Renault Eurocup race of the weekend.

As the track dried, he was able to surpass the 1m39.237s benchmark set by championship leader Max Fewtrell in the first qualifying group. The track times continued to plummet as the session wore on, and Lundgaard ended the session with a 1m38.080s lap to take his first pole since the Hungaroring two rounds ago.

Ye jumped to second in the group with his final lap of the session, ending the morning just 0.022s behind Lundgaard. Piastri, Logan Sargeant, and Milesi rounded out the top five in the group.

Fewtrell waited until the very end of the opening session to jump from outside the top five up to first place. For most of the session, it was Clement Novalak, Victor Martins, and Alex Peroni swapping times at the top of the order.

MP Motorsport driver Peroni occupied the top spot in the closing stages of the session, only for Fewtrell to beat his time by just 0.028s with his penultimate lap of the morning. The new points leader managed to lower the benchmark again before the chequered flag fell, but it wasn?t enough to keep him on pole and he?ll line up for this afternoon?s race second.

Neil Verhagen took second in the group as he took the chequered flag, 0.474s behind Fewtrell, while Peroni, Thomas Maxwell, and Martins rounded out the top 5.

After a strong start to the session, Novalak dropped back to eighth in the group as others found improvements.