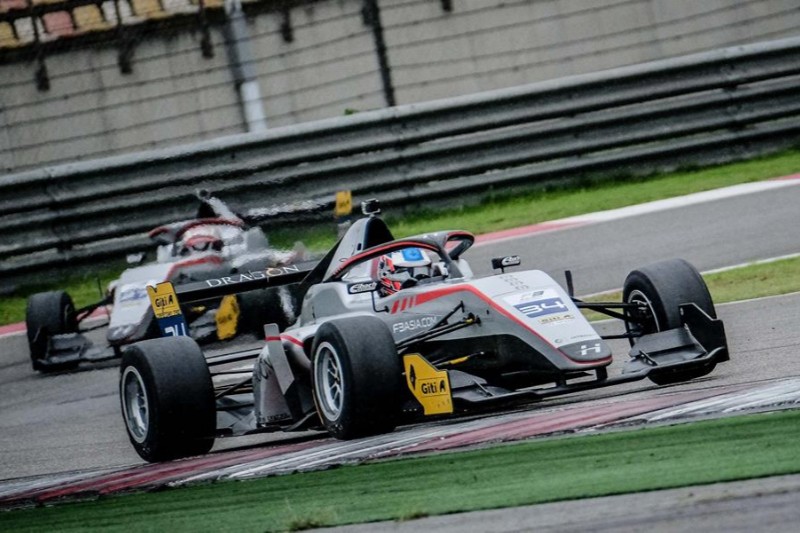 Jake Hughes won all three races on his return to Asian Formula 3 at Shanghai, moving back into the championship lead.

The Hitech GP driver also took both poles and all three fastest laps, and may contest the next round at Ningbo as it does not clash with his GP3 duties for ART Grand Prix.

Hughes only beat team-mate and pre-round championship leader Raoul Hyman by 0.051 seconds in qualifying, a considerable gap ahead of the rest of the field. He had to defend the inside at the start, but after making it through the first four corners was unrivalled.

ZEN Motorsport’s James Yu came through in third, ahead of Hitech driver Charles Leong and Super License’s Tomoki Takahashi, while BlackArt Racing’s Louis Prette failed to complete the opening lap. Leong took third around the outside of Turn 1 on lap two, with Takahashi demoting Yu to fifth further round the lap. Absolute Racing’s Akash Nandy also had a go at Yu, who just managed to hold on to the position before a safety car was called to move Prette’s car.

On the restart of the race Hyman went way wide at the final corner, and almost hit out Leong as he re-entered the track down the pit straight. Hughes immediately pulled away, with the only change in the top six coming when Yu reclaimed fifth at the end of the back straight.

The positions remained the same until Takahashi slipstreamed past Leong down the back straight with two minutes to go for third, while Hughes romped away to a 5.087s victory.

Nandy was beaten by team-mate Jaden Conwright to sixth, with Jeremy Wahome, Liu Zexuan and Yin Hai Tao rounding out the points.

Hughes’ fastest lap put him on pole for race two, and he had to defend from Hyman at the start again. Leong also got involved, but a brave dive at Turn 6 meant it was Takahashi completed the top three at the end of the first lap. Takahashi attacked Hyman at the final hairpin, but he was rebuffed and ended back in the clutches of Leong.

The Macanese driver reclaimed third at Turn 1, Takahashi striking back with another dive at Turn 6, before Leong took the position again at the final hairpin. Takahashi repeated his move on lap 3, and this time kept the position. Nandy kept close to the pair, and when Hyman slowed on lap 8, their three-way battle now became for second.

A full 13 seconds behind Hughes, Takahashi took second, with Leong beating Nandy to the final podium spot. Hyman dropped to ninth, and recovered one spot before the end of the race.

Hughes had an easier start in the final race, with Hyman having to come from the second row to take second into Turn 1. Conwright emerged in third, ahead of Takahashi, Nandy and Leong. A failed move by Takahashi at the end of the lap dropped him down the order, with Prette emerging into the top five.

Once the positions were settled the gaps between the top drivers increased, and Hughes led Hyman and Conwright home on the podium. Takahashi couldn’t recover from sixth, while team-mate Takashi Hata took his first points in ninth.

Hughes now holds a 12 point lead over Hyman, who is 20 points ahead of Conwright and a further 20 over Leong.