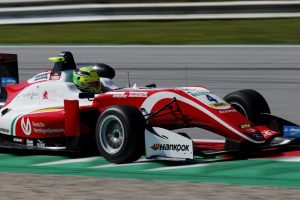 Prema driver Schumacher controlled the 22 lap race from the front, despite the presence of the safety car on three occasions.

The championship leader had to resist race-long pressure from team-mate Marcus Armstrong. On the final restart, Ferrari juniors Robert Shwartzman and Armstrong duelled, leaving Schumacher to build a significant gap before the final safety car came out.

The race ended under the safety car, as Ticktum, Sacha Fenestraz and Jehan Daruvala were all wiped out as the trio of F1 junior drivers unsuccessfully tried to go three-wide while fighting over seventh.

Armstrong prevailed in the battle with Shwartzman, ending a six race podium drought. Juri Vips finished fourth, after an excellent battle with Jonathan Aberdein early in the race.

Ralf Aron had a quiet run to fifth, finishing ahead of Aberdein. Fabio Scherer recovered from a lowly 22nd?on the grid to finish in seventh, ahead of Austrian Ferdinand Habsburg, Guan Yu Zhou and Sophia Floersch, who scored her first point in F3 after a race-long fight with Enaam Ahmed.

The two other safety cars came as a result of an opening lap collision between Sebastian Fernandez and Keyvan Andres, and for another collision later on involving Artem Petrov and Alex Palou. Daruvala and Nikita Troitskiy also had contact while fighting over ninth, which resulted in the latter driver going airborne.