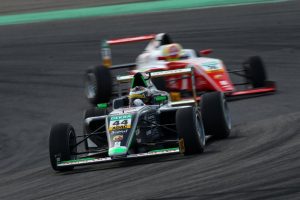 ADAC Formula 4 champion Lirim Zendeli took his ninth victory of the season at Hockenheim as David Schumacher sealed the rookie title despite pitting at the start of the race.

Schumacher made contact with another driver on the opening lap and was sent through the gravel, where he suffered a puncture. The rookie managed to limp back to the pits, the flat tyre damaging the rear bodywork, but was able to return to the track after a rear wing and tyre change.

The US Racing driver spent the remainder of the race running at the back of the field, a handful of laps down with little opportunity to work his way up the order. But, having built a strong lead at the top of the rookie championship, Niklas Krutten would need to finish as third rookie to keep his title hopes alive.

Mucke Motorsport driver Krutten started 13th?overall but slowly worked his way up the order, almost colliding with Petr Ptacek at they battled for position. He eventually managed to catch third placed rookie Gianluca Petecof in the closing stages of the race but couldn?t find a way past the Prema driver for eighth place in the race, ending his title chances.

Zendeli snatched the lead at the start of the race from poleman Liam Lawson. Like race one, the pair swapped places twice more before the end of the opening lap, when the safety car was brought out to recover the stranded Frederik Vesti, who retired after contact with another driver.

On the restart, Zendeli made a strong getaway to pull away from Lawson, eventually finishing 4.5 seconds ahead

Lawson spent the second half of the race battling with Mick Wishofer. The US Racing driver managed to find a way past Lawson before outbraking himself and handing the position back. He wasn?t finished though and managed to squeeze back past Lawson in the closing laps.