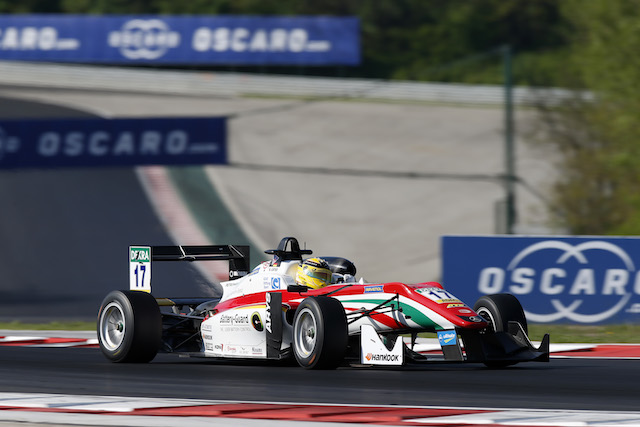 Maximilian Gunther has moved into the lead of the FIA Formula 3 European Championship with a well-controlled victory in race two of the Hungaroring weekend.

Unlike some of his pole position starts of late, Gunther got away well from the line as Prema team-mate and race one winner?Ralf Aron fended off?George Russell.

Gunther led by over a second after lap one, and although Aron initially kept this gap at a consistent size, Gunther was able to pull away to a 3.6-second victory.

Russell again struggled for race pace, and spent half the race defending from?Guan Yu Zhou before the Chinese driver finally made a move stick into Turn 1.

Despite running behind Russell for so long, Zhou was consistently the fastest of the leaders thereafter, finishing just a second behind his 2015 Formula 4 team-mate Aron as he scored his second podium from as many weekends in F3.

Mikkel Jensen was half a minute off the winner in seventh, with a muted?Lance Stroll,?Callum Ilott and?Ben Barnicoat at the front of?the queue behind him.

Erstwhile championship leader?Nick Cassidy failed to score points again after a lap one incident left him 16th at the flag.

Race one podium finishers Niko Kari and?Joel Eriksson?both failed to finish, as did?Nikita Mazepin?who was making decent progress following his ban from race one before he collided with?Pedro Piquet.